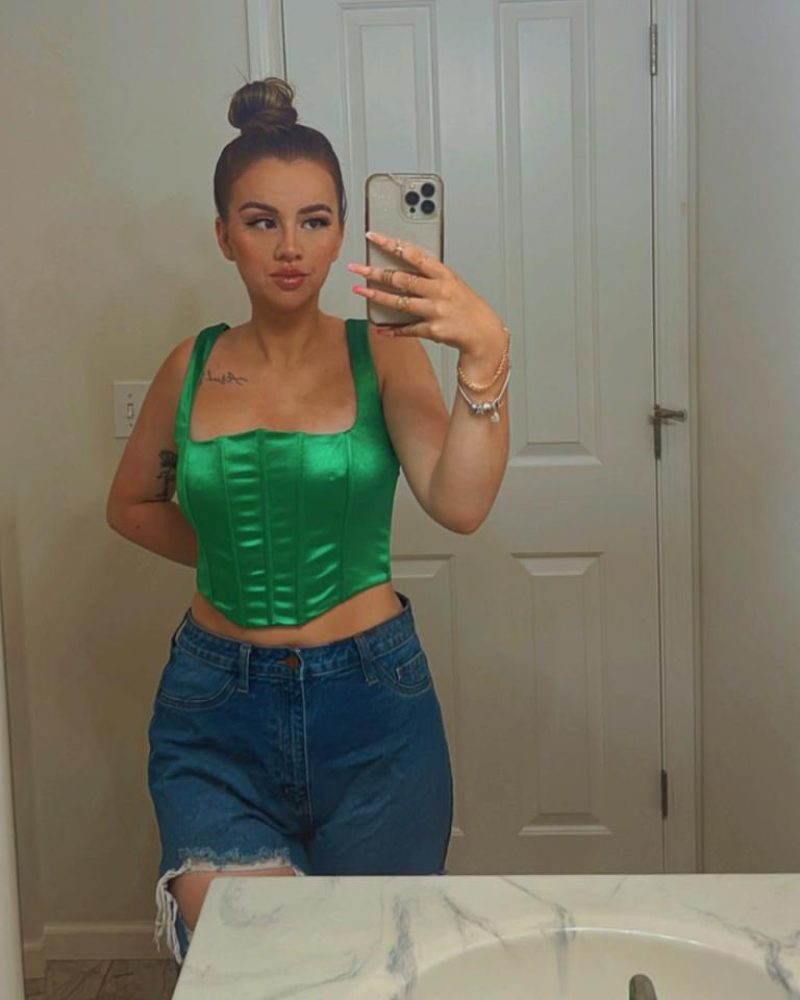 TEEN Mom Kayla Sessler has given fans a look at her bare stomach in a sexy corset amid speculation she may be pregnant.

The 23-year-old took to Instagram to share the snap which has her in a green corset with tight ripped jeans and her hair in a bun.

“Get mad at yourself cause you can’t leave me alone,” she wrote alongside the snap.

Fans were quick to react in the comments section as one wrote: “You’re so freaking stunning girl!” and another said, “Beautiful.”

One commented: “Girl, love this look! Make them stop and stare,” while a fourth chimed in, “You look amazing!”

The star’s new photo comes after fans believe she may be welcoming another child soon.

It kicked off when Kayla shared a snap of her two children, Ariah, two, and Izaiah, four, posing proudly in matching outfits.

The post was a promotion for an online retail company, and showed the kids in matching Burberry t-shirts, Ariah in pink and Izaiah in blue.

However, fans mistook the post as a pregnancy announcement, but Kayla was quick to clear up the speculation by responding to a fan who first brought it up.

The TV star said: “Oh, because of the pink and blue? Nah, but thank you.”

Kayla shares her daughter with Luke, and her son with ex Stephan Alexander.

The reality star’s co-parenting relationship with Stephan has not gone well at all as she previously ripped him for only paying “$11” a month in child support.

Stephan would clap back on his Instagram Stories and write: “Remember what go around come around…” before clearing things up.

He explained: “Every last one of you people on this post need stop trying to make anything I say into Kayla and Luke.

“You heard them, they are not worried about me and I would like for it to remain that way- less drama all around.”

As for Kayla and her current man Luke, they have also dealt with issues in their own relationship.

In December, the couple opened up about their problems during the show’s reunion.

Kayla revealed she’s “still together” with Luke, though they never “worked through” him cheating on her while she was pregnant.

Following Luke’s infidelity, Kayla said she then cheated on him because they “were together but not really acting like it and I think I reached a breaking point.”

Months later, Kayla confused fans after she shared a sexy photo with a cryptic caption that read: “It’s a wrap,” leading to split speculation the pair were done.

Kayla has yet to confirm the status of her relationship, but there will be plenty of drama when she appears on the new season of Teen Mom: Young & Pregnant on June 28.

Instagram/@kayla_sesslerThe TV star recently shared this post of her two kids, leading some fans to believe it was a pregnancy announcement[/caption]

MTVKayla has her youngest child with Luke, however they’ve gone through relationship issues[/caption]