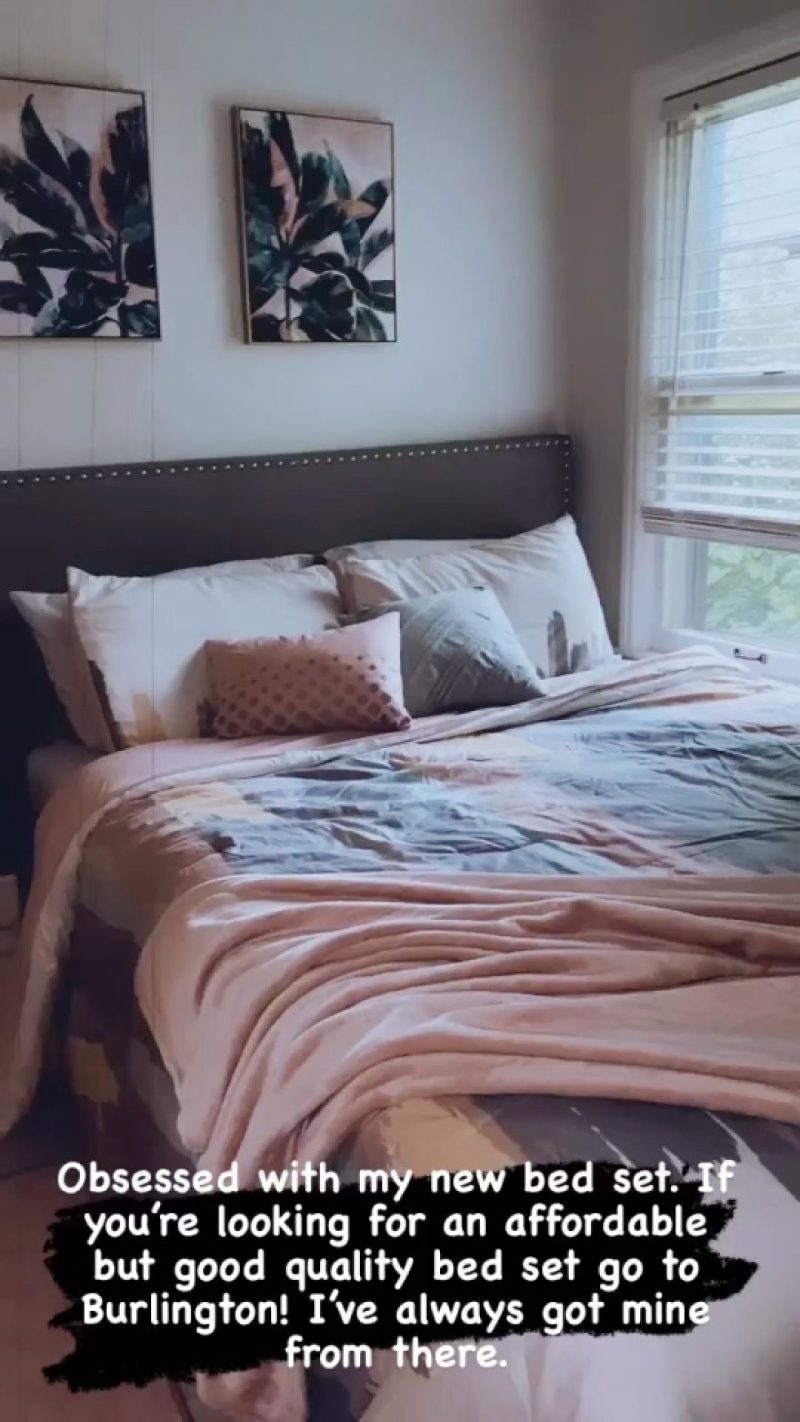 Jade, 24, joined the cast of Teen Mom 2 when Jenelle Evans was fired from the series.

Jade showcased her home’s interior with several videos posted to her Instagram Story.

In the first, the Teen Mom star Boomerangs her bedroom displaying framed paintings, a padded headboard, and a multi-colored pastel bedspread.

Jade comments on the bedding writing, “Obsessed with my new bed set.”

The mom of one then gives her fans a shopping tip by adding, “If you’re looking for an affordable but good quality bed set, go to Burlington! I’ve always got mine from there.”

Jade exhibits a candle in the next post and again she shouts out the discount department store.

“I love to buy candles that match each room. I got this one from Burlington.”

The MTV star then adds, “[I’m] literally just about to show you guys all my Burlington finds so LOL.”

The pseudo-Burlington ad finishes as Jade shows her fans a set of glasses she purchased for four dollars and a California Plum candle that she rates “10/10”.

Jade recently added to the speculation that her disgraced co-star Jenelle Evans, 30, might return to Teen Mom three years after her firing.

The Teen Mom 2 star was joined by Jenelle when celebrating her friend Briana DeJesus‘ court victory over Kailyn Lowry.

Which has lead fans to believe the latter would soon be making her return to the MTV series.

The reality star has fueled the rumors even further when TV personality took to her Instagram Stories on Monday to hold a Q&A session with fans ahead of the Tuesday Teen Mom 2 reunion.

After one asked: “Is Jenelle coming back to Teen Mom?” Jade replied with six shrugging emojis.

Although it wasn’t an admission, it also wasn’t denial, adding to speculation that Jenelle could make her big return.

The fired star left the network in 2019 after her husband, David Eason, shot and killed their French bulldog.

Despite leaving MTV, Jenelle has remained embroiled in the cast drama.

A PAGE FROM JENELLE’S BOOK

Jade shocked fans with a major NSFW career move as she shared a snapshot from her Onlyfans account.

In the profile image, Jade appeared to be covered up with a white sheet while lying on the matching bed.

The MTV mom is charging about $15 per month for a subscription fee, which is less than co-star Jenelle Evans’ account.

Teen Mom fans claimed in the comments section that Jade already had an OnlyFans account but has only been recently promoting the site.

One fan mentioned: “She’s never advertised it in a very long time. Maybe she hasn’t been doing anything with it and gave up.

“She is just starting to do it again.”

Another fan noted: “She already had an account before Jenelle.”

A fourth person chimed in: “She’s already been on OF. Way before Jenelle.

“Might have a renewed interest in it if Teen Mom is soon going bye-bye.”