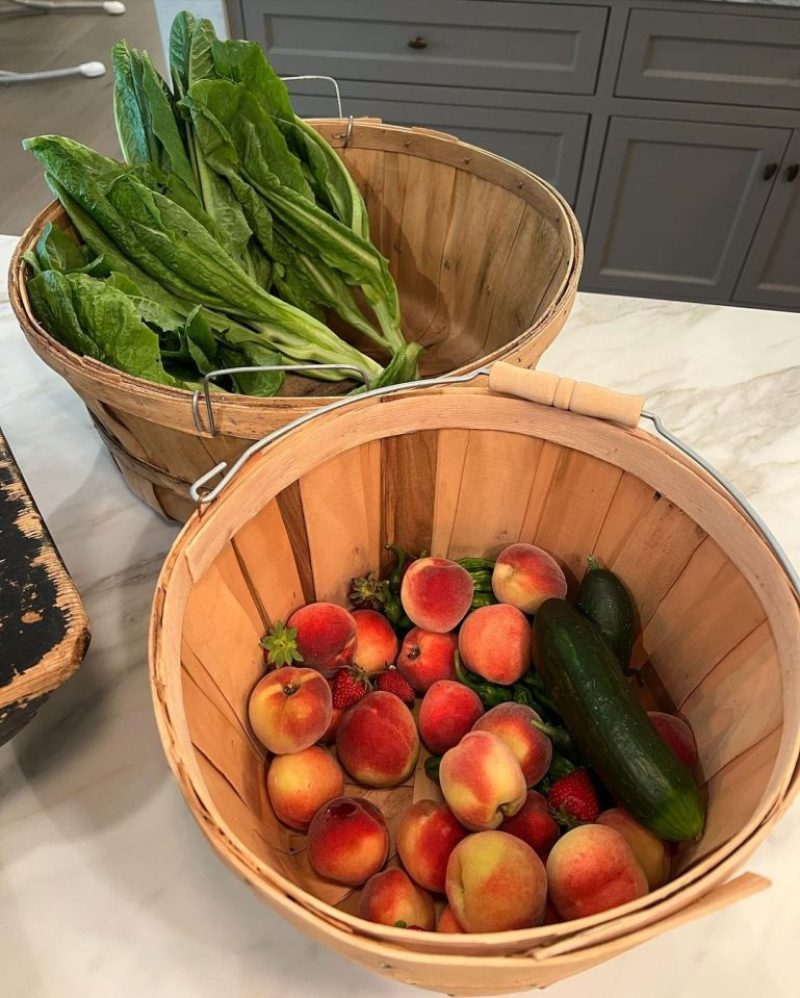 KYLIE Jenner has shown off the massive garden at her $36M Los Angeles mansion.

The rest of Kylie’s, 24, stunning backyard was toured by sister Khloe Kardashian, 37. in a recent episode of The Kardashians.

The Kylie Cosmetics founder posted photos from her garden and the spoils of it to her Instagram.

The first photo shows the literal fruits of Kylie’s labor with wooden baskets filled with peaches, cucumbers, and greens.

The second takes the fans outside where the mother of two features a blossoming peach tree.

Kyle then displays her plant boxes full of strawberry plants as she holds one of the ripe berries to the camera.

The next photo focuses on a different part of the enclosure.

Spring onion, parsley, and other herbs grow abundantly and dominate this small nook of the garden.

While the last photo features an up-close look at the makeup mogul’s lemon tree.

Kylie captioned the post, “happy 2 be home” with a bee emoji representing the word.

Fans expressed their love for Kylie and for her garden in the comments.

One person wrote: “My dream garden.”

Another added, “I love your garden!!! and “WE LOVE THIS ACTIVE KYLIE!!”

A few haters made their way into the mix with one writing, “You paid someone to do all of that work for you. Take no credit”.

While a second added: “Right I can not even deal with them anymore after seeing the grocery store episode.”

One fan cracked, “Give the cucumber to Kendall”, referencing of course the odd way Kendall sliced cucumber in a recent episode of The Kardashians.

Fans recently got a look at the rest of Kylie’s stunning backyard during a recent episode of the Hulu series.

Khloe Kardashian and her best friend Malika, 39, visited the youngest sibling’s Hidden Hills home to pick something up.

The friends parked in the makeup mogul’s driveway before walking through to her backyard.

On the right sat an adorable children’s playhouse for her daughter Stormi, four, complete with columns, windows, and a second-story balcony.

Khloe and Malika then visited Kylie’s pristine chicken coop, filled with the brown birds and their matching fresh eggs.

The pair then stopped in front of a massive children’s playground, with a slide, drawbridge, and rock wall.

The friends then continued on towards the veranda where Kylie had several lemon trees planted.

They passed a trampoline on the left, and further back the makeup mogul’s pool could be spotted with lounge chairs and resort-style umbrellas.

On the back patio, Kylie had large windows looking out onto comfortable seating for guests.

A decorative water fountain bubbled as the two continued to catch up.

Kylie has given only glimpses into her California mansion since moving in, but a somewhat recent post finally gave fans a look at her beautiful TV room.

Last month, the E! star recorded a video on Instagram Stories of her flat-screen television to promote an upcoming episode of the Hulu original.

As Kylie displayed a preview of the upcoming installment, the clip briefly captured the star’s stunning TV room with white walls and cream-colored sofas and pillows.

She then zoomed in on the screen, reminding her fans to tune into the show.