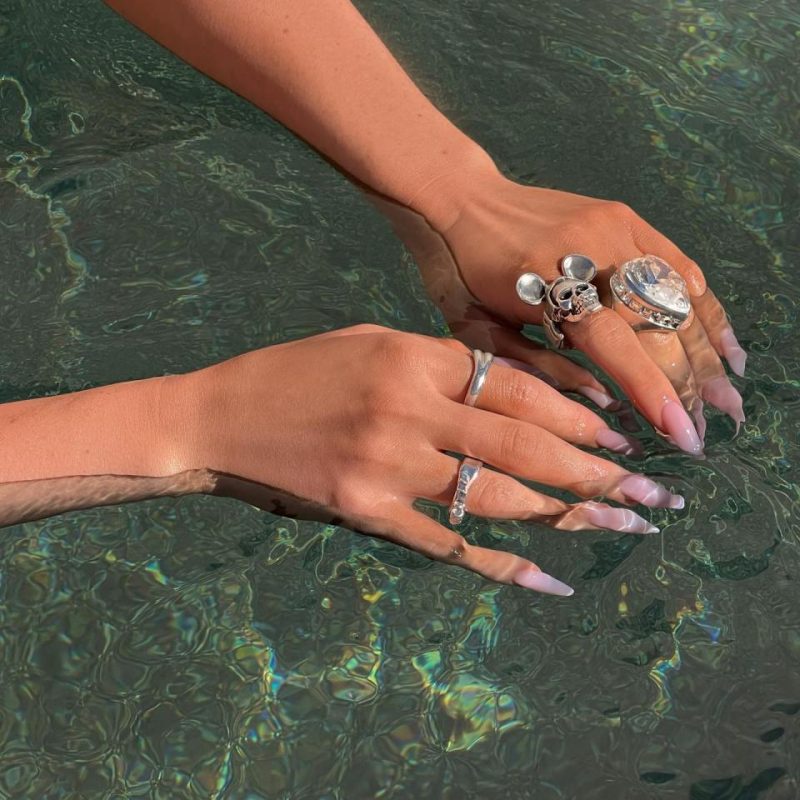 KYLIE Jenner has flaunted $2.5k worth of rings as she enjoys a lavish getaway in Utah.

It comes after the Hulu star has faced criticism for showing off her wealth.

Taking to Instagram, 24-year-old Kylie shared a new snap of her wearing an assortment of interesting rings on her two hands.

Most eye-catching was a large heart ring by Ambush that she wore on the middle finger of her left hand.

The oversized piece might be Kylie’s new favourite and she left fans dying to know where she bought it from when she shared a picture of her wearing it last week.

Also on her left hand, the billionaire wore a skull ring with Mickey Mouse ears worth $320.

The gothic piece is handmade in London by The Great Frog, and Lady Gaga wore the same design in the music video for her 2009 hit Telephone.

On her right hand, Kylie kept things more simple, wearing a thin molten ring on her forefinger, and a silver band with hammered detailing on her wedding finger.

Although the prices of these pieces are unconfirmed, it’s likely that they are custom made with a hefty price tag.

Kylie loves to show off her unique bling, and previously wore $1.5k of rings to complement a head-to-toe Diesel outfit.

In March, she flaunted three chunky gem rings from the brand Pieces Of Four, which is also favored by her sister Kim Kardashian, 41.

But not all fans have enjoyed seeing Kylie and the other members of her famous family flaunt their wealth.

Earlier this month, the cosmetics mogul faced backlash when posted a video of her holding her $210k Birkin bag before boarding her $72m private jet.

She also previously came under fire after filming herself pushing her son in a $5K Dior stroller.

Similarly, fans called out Kourtney Kardashian, 43, for showing off a $530 skull lamp from her fiance Travis Barker’s new homeware line.

Kylie, who gave birth to her baby boy in February, is currently enjoying a lavish girls’ getaway in Utah.

But the reality star is still keeping fans entertained with a showering of photos from the luxurious trip.

Today she made her followers do a double-take as she showed off her “nipples” in a NSFW bikini.

The new mom also flaunted her flat stomach in a skintight swimsuit while she enjoys some time away from her baby daddy Travis Scott, 31.