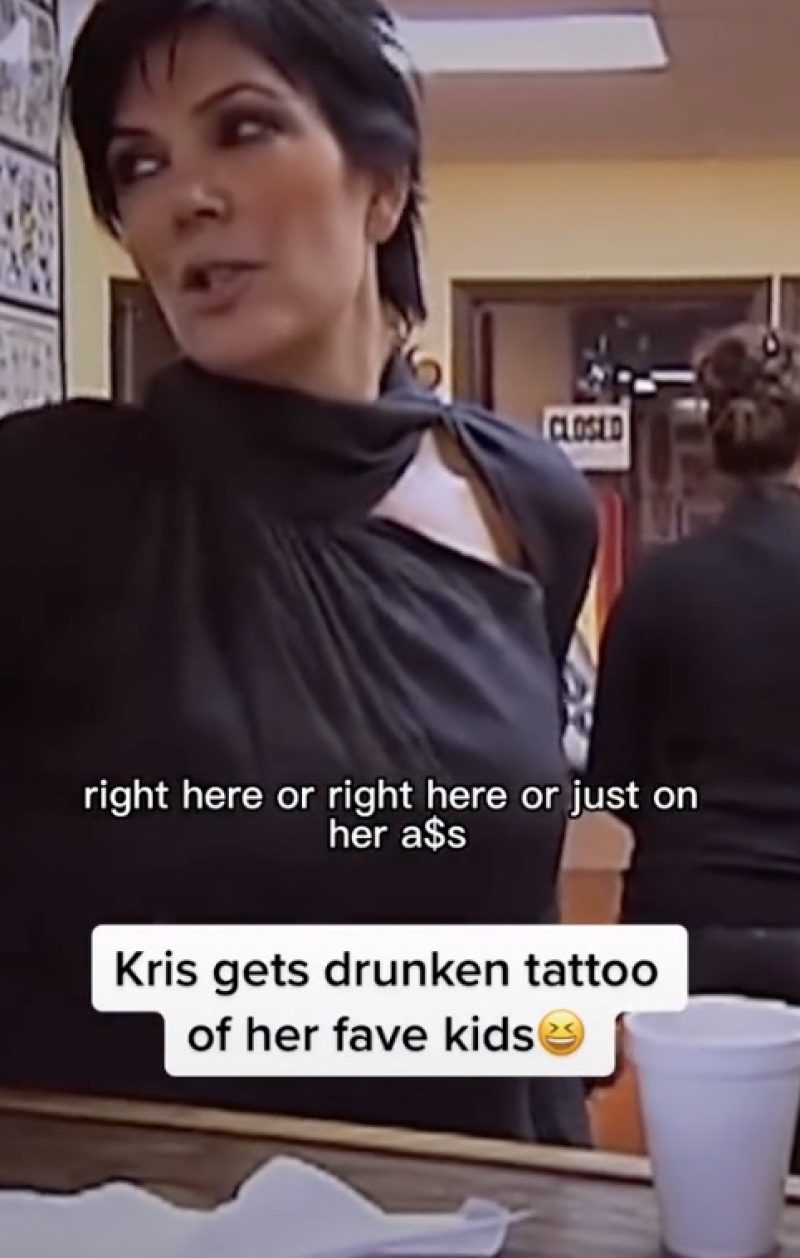 KARDASHIAN fans believe that Kris Jenner has revealed her favorite daughters in a resurfaced clip.

The momager got tattoos of two of her kids’ names on them on her butt.

E! / TikTokKris Jenner got two children’s names tattooed on her butt and fans think she favors children over others[/caption]

A Tiktok user posted an old video from KUWTK of Kris getting a tattoo while she’s drunk.

“Or should she just go with her a**?” she asked the tattoo artist.

As she is picking out designs with her friend, she is drinking something out of a styrofoam cup and laughing.

“But my problem is, I have like 32 children, so how do you put everyone’s name on your body? You don’t,” Kris joked.

“You know what. I’m not so happy with the older children right now, so Kylie and Kendall get names, and Khloe, Kourtney, and Kim don’t.”

“This sounded like a good idea after a couple of shots,” Kris said, as she got the tattoo inked onto her.

“But you know what? I love it,” she said, as she showed the ink to her friend that was on her butt.

“The girls will love it,” she said. “And that’s all that matters.”

The clip ended with Kris saying bye to the workers.

This isn’t the only time, Kris has favored some of her children over the others.

Back in April, Kris, along with Kourtney, Kim, Khloe, Kendall, and Kylie, sat down for an interview with Access Hollywood‘s Kit Hoover.

While promoting their Hulu show, the host asked, “Who is mom’s current favorite child?”

While Kris chose to abstain from answering, the rest of the family seemed to come to an almost instant agreement on two siblings.

“I was there last night when she said ‘I’ve never been more proud of anybody in my life.’”

Momager Kris then jumped in to defend herself.

“Different day, different kid, what can I say?” she confessed.

Just last month, Kris revealed her favorite child at that time, and it wasn’t Kendall or Kylie this time.

She claimed that her current favorite child was Khloe because she helped her clean her bathroom.

The 66-year-old revealed this during an interview with Access Hollywood that was shared on Tiktok.

The interviewer began the conversation, saying: “When we spoke last time we were teasing.

“I said okay which is mom’s current favorite right now? And all the kids put up Kylie and Kendall.”

“Has it changed since last time?” she asked.

Kris replied: “Um I think today might be Khloe. Yeah, Khloe. Cause she’s at my house right now cleaning my bathroom.

“She keeps calling me going, why do you have this junk? I said so throw it away.

“She had to go use my bathroom or something but she ended up reorganizing the whole thing cause that’s what we do,” she explained.

Just last month, fans noticed that she favored one child over another when she posted about one and not the other.

Fans on Reddit noticed a bizarre detail about one of her posts on Instagram and think she has a favorite child.

The original poster on the thread noticed how the 66-year-old posted a picture of Kim’s Sports Illustrated cover, but only shared a story about Kourtney’s wedding.

“Find it interesting that Kris made a timeline post for Kim’s Sports Illustrated cover, but only a story post for Kourt’s marriage,” the screenshot of her Instagram feed read.

Yesterday, Kris reposted Kourtney’s post about getting married to her story.

“Congratulations @kourtneykardash @travisbarker!!!! I love you guys so much!!!!,” she captioned the post while adding a “Just Married” banner to it.

She shares the first four with her late husband, Robert Kardashian, and Kylie and Kendall with her ex Caitlyn Jenner.

E! / TikTokA close-up of the tattoo Kris Jenner got of two of her kids’ names[/caption]