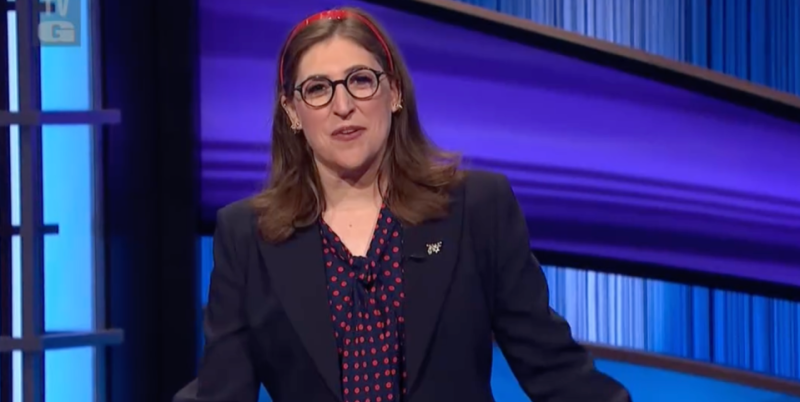 A JEOPARDY! round on Tuesday completely stumped all three shocked players and viewers at home.

Fans slammed host Mayim Bialik for the “made up” category dozens said “made no sense.”

Mayim Bialik, 46, is hosting Jeopardy! for the fifth week in a row, returning after alum Ken Jennings’ prior three weeks at the helm and announcement he’d be out for “months.”

The Minneapolis, Minnesota meteorologist won again tonight, but not before one category fans and all three players simply did not understand.

During regular Jeopardy!, the bizarre category was titled “Texting Abbreviations.”

Now two-day winner Eric – who bested Ryan Long last night – was able to guess “Off To Bed,” but after that clue, the entire round was anybody’s guess – or no one’s.

“FC is this hopeful condition,” another read.

When no player buzzed in and all looked confused, Mayim broke the silence with a cheery demeanor, “Finger’s crossed!”

“I’ve Got To Know, ‘PTMM’ please do this,” a third read; again no one replied.

One more read, “Where Have You Been? ‘LTNS’ this.”

Again – no reply from any player as Mayim exclaimed on the strange scene, “Long Time No See!” adding, “What will those texting kids think of next?”

The round resulted in four out of five triple stumpers – meaning no correct response, let alone guess.

Over on Twitter fans weren’t so sure the abbreviations were even real.

“Sry but no one uses those texting abbreviations #Jeopardy,” one wrote.

A third accused, “I’m pretty sure those texting acronyms were made up.”

As a fourth wrote, “none of these texting abbreviations are real,” and a fifth simply called it a “stupid category.”

A sixth wondered, “Am I an old millennial? Do people really use those acronyms texting?!”