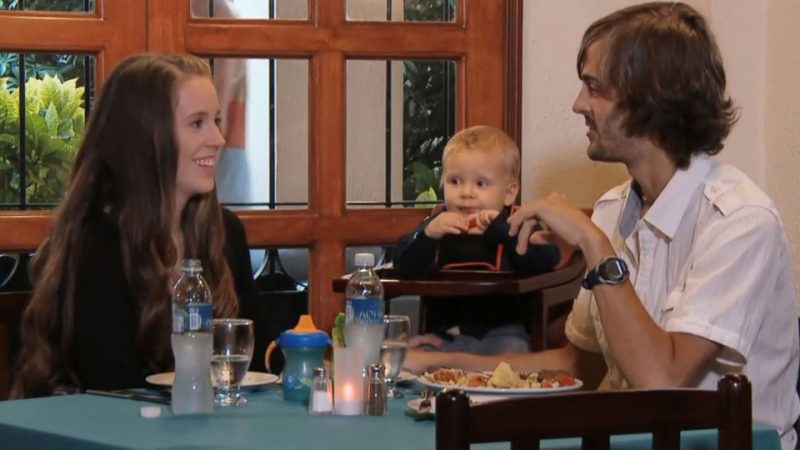 DUGGAR fans have slammed Jill’s husband Derick Dillard for comments he made during a dinner date.

A resurfaced show clip appeared on Reddit and fans were quick to react, calling it “creepy” and “bizarre.”

The clip shows Jill and Derek out to dinner with one of their sons.

In an attempt to impress her, Derek proclaims, “Marriage is like lifelong learning.”

“So right now I have my high school diploma in Jill Dillard, but I want to study you more and get my Bachelor’s and Master’s.

“Eventually I’d like a PhD in Jill Dillard, so I can think what you’re thinking before you even think it.”

Fans were quick to point out Jill’s uncomfortable smile and squirming.

One viewer wrote, “I can just hear Jill internal dialogue, ‘Okay smile and pretend he’s being sweet and amusing even though he’s making zero sense.’”

Another pointed out, “I’m not sure I want my husband to think what I’m thinking before I think it. Seems like that could be a major problem.”

While he may not have earned his Ph.D. in Jill Dillard, Josh graduated from law school in 2021.

Jill gushed over how “incredibly proud” she is of her husband and the father of her two kids for graduating from law school.

After attending the University of Arkansas law school graduation ceremony, Jill had shared some snaps from the event, including ones of Derick walking the stage and collecting his diploma.

A source told The Sun: “They moved into their new home in Siloam Springs, Arkansas.

“Derick has started his new job in Oklahoma. It’s about a 45-minute drive from where they live now.”

In exclusive photos of the home taken by The Sun on May 24, the family was already moved into the house.

They shared on their Dillard Family site: “We are joining the masses of people who are currently navigating this crazy real estate market… we are moving!!”

They explained: “We are sad to say goodbye to our very first home that we bought three years ago, but pray it brings much joy to the next family who will get to make memories here.

“We are moving for a new job Derick recently accepted and are super excited for new adventures!”

Jill and Derick will need a new house to fit their growing family.

The Counting On alum broke the news on her Dillard family website that she is pregnant with baby number three.

She posted on their website: “We’ve been keeping a little secret!”

The reality star continued: “Ever since we were devastated last fall by the miscarriage of our sweet baby, River Bliss, we have prayed that, if it was God’s will, he would bless us with another baby.”

She concluded: “We are excited to announce that God has answered our prayers and we are expecting our rainbow baby due July 2022!”

The couple revealed shortly after the announcement that they are expecting their third son together.

They are already parents to sons Israel, six, and Samuel, four.