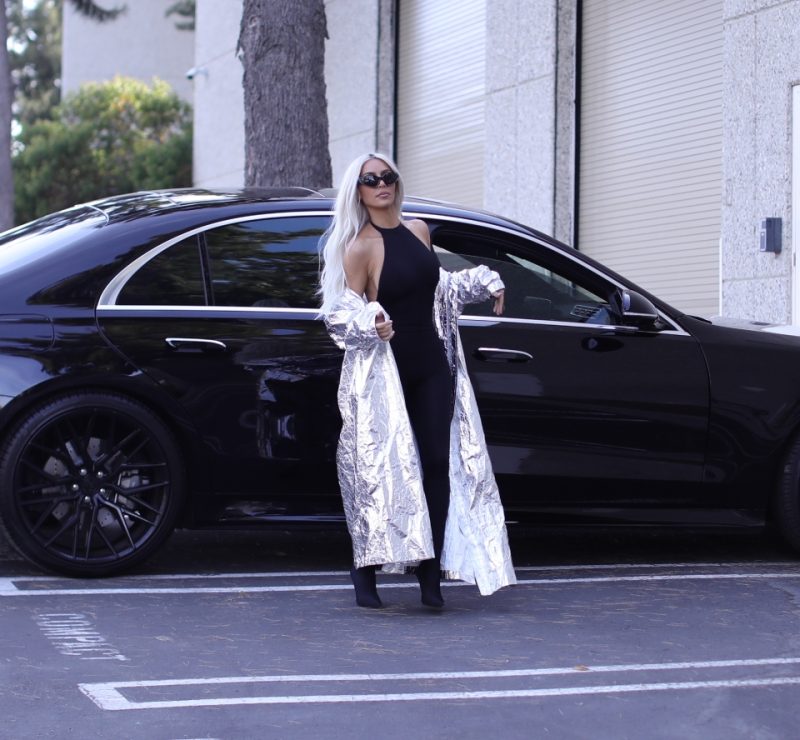 KIM Kardashian has shown off her curves in a skintight black catsuit and an oversized $2K “tin foil” jacket for some sultry new pics.

Kim, 41, was spotted in Los Angeles, stunning onlookers with her outfit.

The Mega AgencyKim opened the door to an office building[/caption]

The Keeping Up With the Kardashians alum sizzled in a steamy bodysuit that teased side boob.

The E! star strolled out of her fancy car and headed towards an office building.

She strutted across the parking lot in her high-heeled boots.

The Kardashians star covered her eyes with shades and let her platinum blonde hair loose.

KEN YOU SEE IT?

She had on a silvery and glowing trenchcoat with a tail that reached to her heels.

According to the Balenciaga site, the “hooded raincoat in silver” is estimated at around $2,200.

This is not the only time Kim stepped out in a jaw-dropping wardrobe.

Back in March, the KUWTK star turned heads at the Balenciaga fashion show in Paris.

Kim modeled in a black bodysuit that the designers covered in a bright neon yellow tape, which read “Balenciaga.”

Unfortunately, there was a hilarious video that showed the Hulu star struggling to walk, and taking small steps in the outfit.

While strutting across the streets of lower Manhattan, the fabric wrapped itself around her arms, while clinging to her hips and legs.

She completed the sexy look with a thick gold necklace and matching sunglasses.

Kim filed for divorce from her ex-husband Kanye West, 44, in February of 2021.

Kim did not stay single for long as she started dating Pete Davidson, 28, back in October 2021.

Her boyfriend Pete was recently spotted shopping and holding hands with her son Saint, six, in a sweet video.

The pair held hands as they stopped in front of a street vendor on the sidewalk.

The two were seen in public as they looked at the collection of fedora hats.

Pete put together a casual look with a black cap, a large T-shirt, and green shorts.

The Saturday Night Live funnyman also seemed to have shaved his head while Saint wore a bright blue shirt with matching shorts.

The duo also made another stop in front of The Cheesecake Factory restaurant.

The Suicide Squad actor also has a neck tattoo in honor of her children.

The first initial stood for his girlfriend.

The order of the children’s initials went from the oldest, North, to the youngest, Psalm.