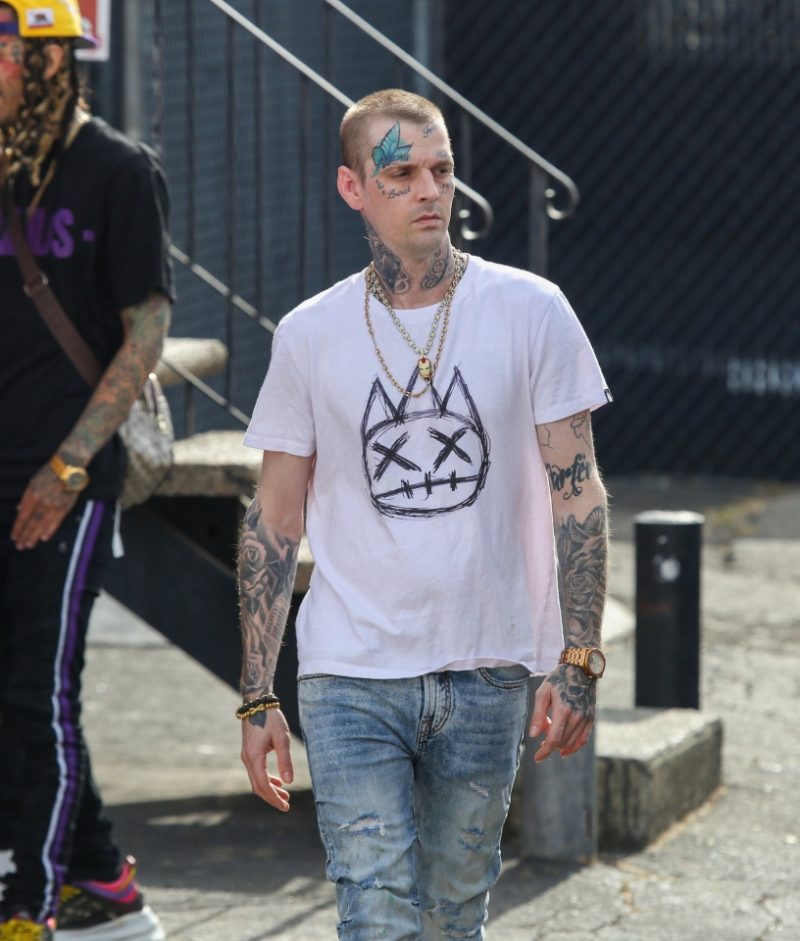 Pictured arriving to play a gig in Los Angeles, Aaron, 34, was photographed with a shaved head.

He showed off a huge facepiece in addition to his already extensive body ink.

What to know about Aaron Carter’s former fiancée Melanie Martin

The rapper/singer kept his outfit casual in blue jeans, a graphic white T-Shirt, and chunky gold jewelry, including an Iron Man pendant.

He was spotted outside the legendary Whisky A GoGo venue, where he performed earlier this week.

Aaron got the huge butterfly tattoo on his face in March, in tribute to his sister Leslie, who died from a drug overdose in 2012.

However, fans don’t know what prompted him to shave his hair.

The aesthetic revamp however comes three months after he split from his former fiance, 29-year-old Melanie.

After an on/off phase, Aaron put the relationship behind him, tweeting that he “can’t trust women anymore.”

The two share one child – a baby boy called Prince Lyric whom they welcomed in November 2021.

Aaron tweeted: “My relationship has come to a point where we have to part ways. Please respect my privacy at this time. Thank you.”

In a follow-up tweet, he wrote: “I have no intentions of being in any relationship anytime soon.

“I’m too scarred and I can’t trust any woman.

“So I’m going to protect my soul and my heart.”

Aaron burst onto the scene in the ’90s as a fresh-faced young pop star with a mop of blonde hair.

Sadly these days he is known more for his troubles than he is for his music.

His older brother Nick Carter, 42, is best known as one of the five members of Backstreet boys.

Aaron split from Melanie Martin earlier this yearGettyInstagramFollowing the breakup, he said he ‘can’t trust any woman’[/caption]