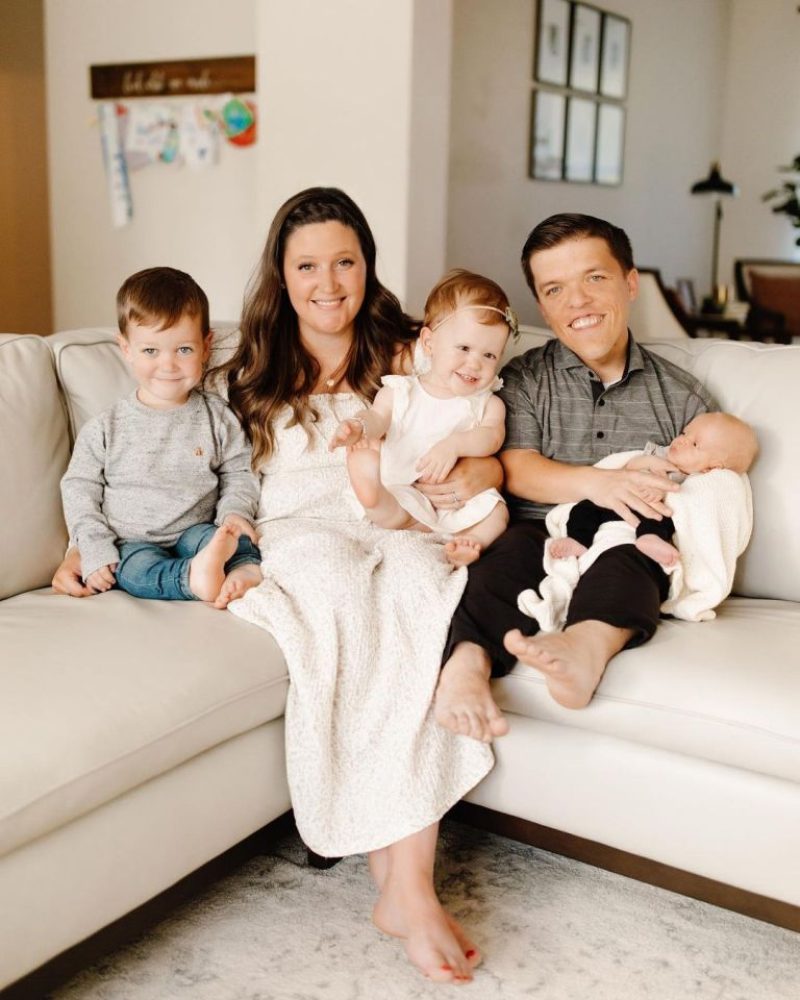 LITTLE People, Big World’s Tori Roloff shared a sweet first family photo of her entire clan since she welcomed her baby son Josiah about one month ago.

Tori, 31, and Zach, 32, have finally been able to put together a snapshot with all their kids together.

In the Instagram photo, the LPBW stars cuddled together with their kids while sitting on a white sofa.

Jackson, five, sat next to his mother as his sister Lilah, two, sat on her lap.

Zach smiled at the camera as he carried his newborn son, Josiah, in his arms.

In the second photo, Zach continued to hold Josiah as the baby boy was surrounded by his siblings and mother.

As the series continued, Jackson carried his baby brother as he sat close to his younger sister.

The series concluded with a sweet shot of the mother of three kissing Josiah’s head as she stood next to the window.

The reality star captioned the post: “Z and T. Party of five.”

In an Instagram story, Tori sat in bed with her three children.

She wrote: “Thankful for rain today.

“Keeps me from feeling guilty on this lazy day with my three favorite kids.”

The TLC couple welcomed their third child, Josiah, at the end of April.

Josiah was born earlier than they initially expected.

Tori announced the news on social media and wrote: “You surprised us all by coming early, but also the wait felt like a lifetime!

Zach added: “He came about two weeks early, but we were ready!”

While speaking recently to US Weekly, the TV personalities shared the news of their third child’s genetic condition.

He hoped to help others who have children with dwarfism as the couple will become “advocates for people with dwarfism cause of our kids.”

During the reality show’s premiere, Zach slammed his father, Matt Roloff, 60, as a “bad grandparent” who doesn’t “value his family.”

Zach thought about his family’s future as he said: “We want to be somewhere that we can see ourselves for a long time.

“And where we’re at right now is not that place.”

He continued: “I think the farm would be a great spot for Jackson and Lilah to grow up.”

While thinking about the “positives” of “living on the farm,” the TLC star decided to “make an offer” to his father.

Unfortunately, he revealed: “Things did not go well. It was bad.”

According to the Wall Street Journal, the Roloff patriarch asked for about $4million with the sale of the “original family home and bright red barn.”