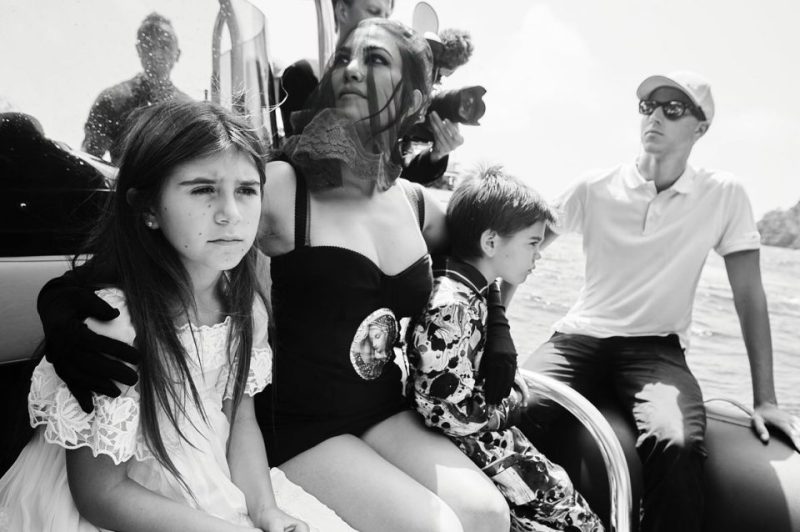 KARDASHIAN fans are thinking that Kourtney’s kids Penelope, nine, and Reign, seven, look “miserable” on their boat ride at her wedding to Travis Barker.

The newlywed parents have been slammed by fans for their constant PDA in front of their kids.

Kourtney, 43, posted yet another slew of photos on Instagram from her wedding to Travis, 46, in Portofino, Italy.

Although the third black and white photo of Penelope and Reign sitting in Kourtney’s arms beside Travis on a boat stood out to fans in particular.

One user commented: “Slide three… when your kids are sick of you,” and added a laughing emoji.

Yet a third agreed and said: “So pretty, but your kids don’t look happy.”

A user replied and commented: “They look so miserable.”

A fifth chimed in: “Those kids don’t look happy.”

REIGN ON HER PARADE

Reign also broke down into tears as he sobbed before Kourtney tied the knot to Travis.

Her son burst into tears during his stroll alongside his stepfather and mother.

Keeping Up With The Kardashians fans shared the image of Reign crying on Reddit and mentioned how the little one happened to be “all of us.”

One fan said: “The more I look at this pic, the more chaotic it gets.”

Another fan added: “I am getting so close to being him too.”

A fourth person wrote: “Decisions were made, and they weren’t good.”

A commentator chimed in: “Kourtney looks like she’s trying so hard to smile, but it is so obviously forced.”

Yesterday, Travis posted more PDA photos from their wedding as the couple made out in an elevator.

Kardashian fans cringed as Kourtney posted a NSFW comment about her sex life in the comments.

In the photos, Kourtney wore her wedding gown and veil and got sensual with her new husband.

The pair made out and Travis captioned his post: “Love in an elevator.”

Although fans got fired up over Kourtney dropping an NSFW post in the comments.

One wrote: “Close enough to the actual lyrics, I guess.”

However, another complained: “Bored with this constant PDA.”

Other fans took to Reddit to discuss the picture further.

One posted: “Penelope looks miserable in all of the wedding photos I’ve seen.”

A second said: “The only kids who appear to be happy are the Barker kids.”

Yet a third added: “Every photo that comes out shows the same thing. I just don’t feel genuine happiness or celebration in any of these.”

Their wedding was no different, as the two kissed, cuddled, and more throughout the night.

Fans had plenty to say about the PDA as they ripped them for packing it on during the wedding ceremony.

Kourtney and Travis has been slammed for dancing “inappropriately” in front of his daughter Alabama.

The Hulu star wrapped her legs around Travis’ waist and kissed him as his 16-year-old daughter looked on at their wild wedding party.

The Kardashian-Barker jumped into Travis’ arms and nuzzled his neck as the rocker’s hit All The Small Things played.

They were also slammed for another NSFW display during the wedding.

On Monday, the two were seen sharing a steamy kiss on board a $15million superyacht owned by their fashion designer pals Domenico Dolce and Stefano Gabbana.