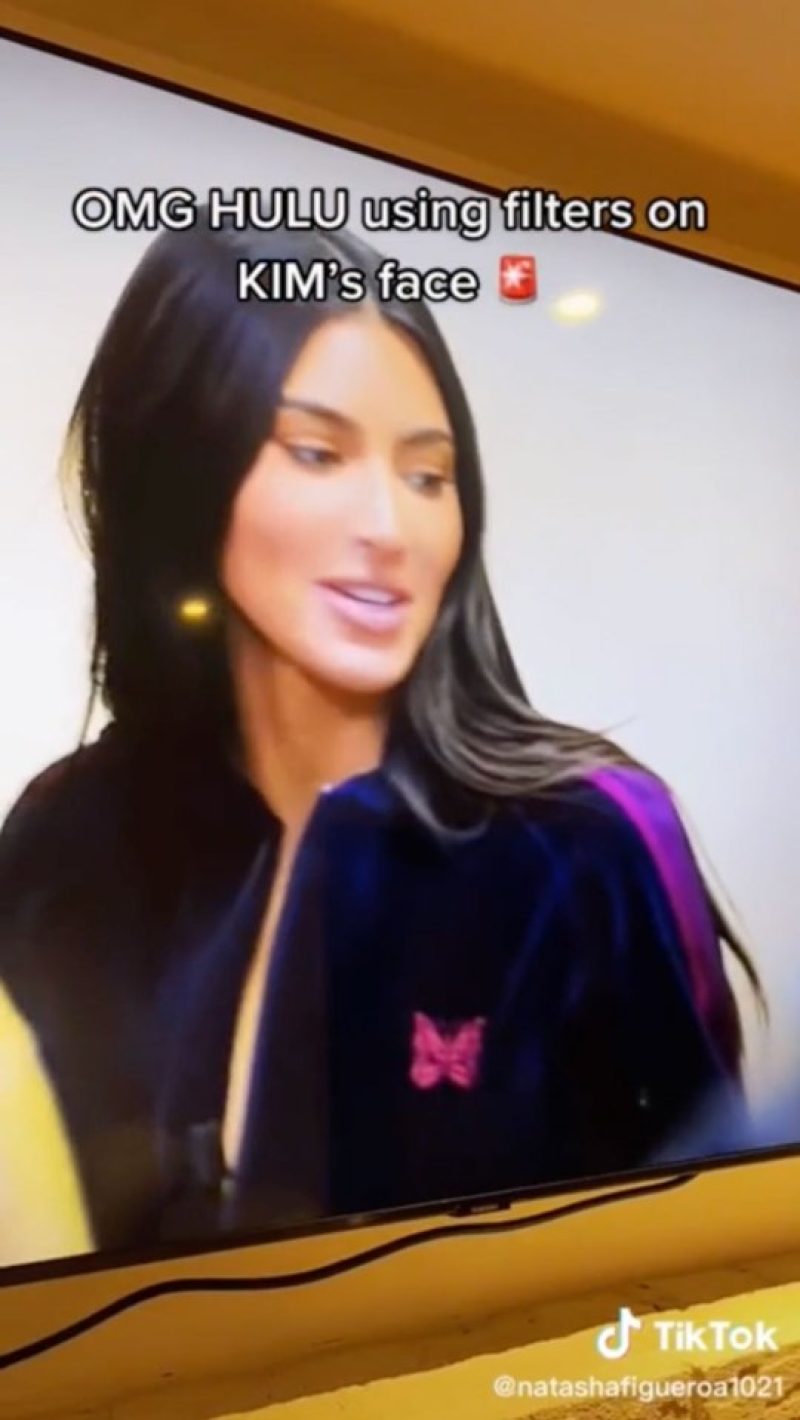 KARDASHIAN fans have accused the Hulu reality show for being “fake” after they have spotted something “shocking” about Kim’s face in a recent episode.

Fans of the “reality” show are upset as they believe the show is using filters on Kim’s face.

A clip of the Hulu show reposted on TikTok made its way onto Reddit.

In the clip, Kim, 41, is wearing a black tracksuit with purple side stripes.

Her hair is down and flowing as the star went through a massive wardrobe of clothing.

However, fans were outraged by a tiny production detail.

They thought Kim’s face appeared shockingly different in the clip on the show.

The video was captioned: “OMG, Hulu is using filters on Kim’s face.”

Another user replied to the thread: “That’s when you know, you look old on film. Poor Kimmy.”

Fans of the Kardashian Hulu show have also accused producers of faking a scene to avoid addressing the Astroworld tragedy.

In the latest episode, viewers were confused when Kendall Jenner implied that she was missing her mom Kris‘ birthday party because she was in Miami.

Kris celebrated her 66th birthday on November 5, when Kendall and her sister Kylie were at Astroworld festival to watch Travis Scott perform.

Both sisters shared videos on social media from the event – before the deadly crowd surge that led to 10 people dying and hundreds being injured.

However, on The Kardashians, Kendall made no mention of being Houston, Texas, for the festival.

Instead, she was seen on vacation with her friend Hailey Bieber while Kris was preparing for her birthday party.

After Kris’ dinner, Kendall suggested she missed the event because she was in Miami and rang her mom on camera for a catch-up.

“I love these little trips that we do, I’m just sad that I’m missing my mom’s birthday,” Kendall said in a confessional.

“I’ll be back to give her a nice birthday hug in a couple of days.”

She then told Kris on the phone, “I was just calling to see how your birthday was,” before listening as Kris filled her in.

Kendall was actually not pictured in Miami until November 12 when she was photographed by the paparazzi – almost a full week after Kris’ party.

Viewers flooded Twitter with their anger at the famous family for “faking” a scene to avoid mentioning Astroworld.

One wrote: “The Kardashians really faked the Kendall in Miami during Kris’ birthday plot… because Kendall was in Houston with Kylie at the Astroworld travesty…”

Another added: “We’re not stupid The Kardashians, we know Kendall was with Kylie and Travis in Houston during the Astroworld accident on Kris’s birthday.

“Don’t play it off like Kendall was in Miami the whole time.”

This isn’t the first time The Kardashians has faced accusations of scripted scenes.

RESHOOT FOR THE STARS

Fans also thought they spotted a major clue a scene had been re-shot.

In one scene, Kris Jenner broke down in tears as Travis Barker read her his upcoming proposal speech to Kourtney.

The moment was presumed to have been filmed in October 2021, since that is when Travis and Kourtney got engaged.

Kris became emotional and wiped away tears as she read Travis’ text on her phone, with her partner Corey Gamble next to her.

Looking choked up, she read out: “A year ago today, I fell in love with you, One night with you is all it took.

“You’ve been one of my best friends for years. I’ve admired and adored you for so long. You’re the love of my life.”

Minutes later, Kris rang her daughters Kim and Kylie to tell them that Travis and Kourtney’s engagement party was still going ahead.

However, eagle-eyed viewers noticed that their contact names were all listed in 2022 – months after the proposal took place.

During the scene, the girls – who were on speakerphone – shared their excitement at the seemingly upcoming party.

Critics flooded Reddit to express their frustration at the reality stars for “faking” the moment.

One wrote: “Did anyone notice how while – Kris was on the phone with Travis and crying at the text he sent her – scene, she called Kim and it said ‘Kimbo 2022’????

“So they reshot/re-enacted/faked that scene? Where is her Emmy? Kourtney and Travis got engaged in October 2021, hmmmmm.”

Another posted: “Oh my God I never would have realized this! Damn this show so scripted.”

A third added: “Seriously is any scene we watch on that show actually real?”

This is not the first time The Kardashians has been accused of faking scenes since it first aired earlier this month.