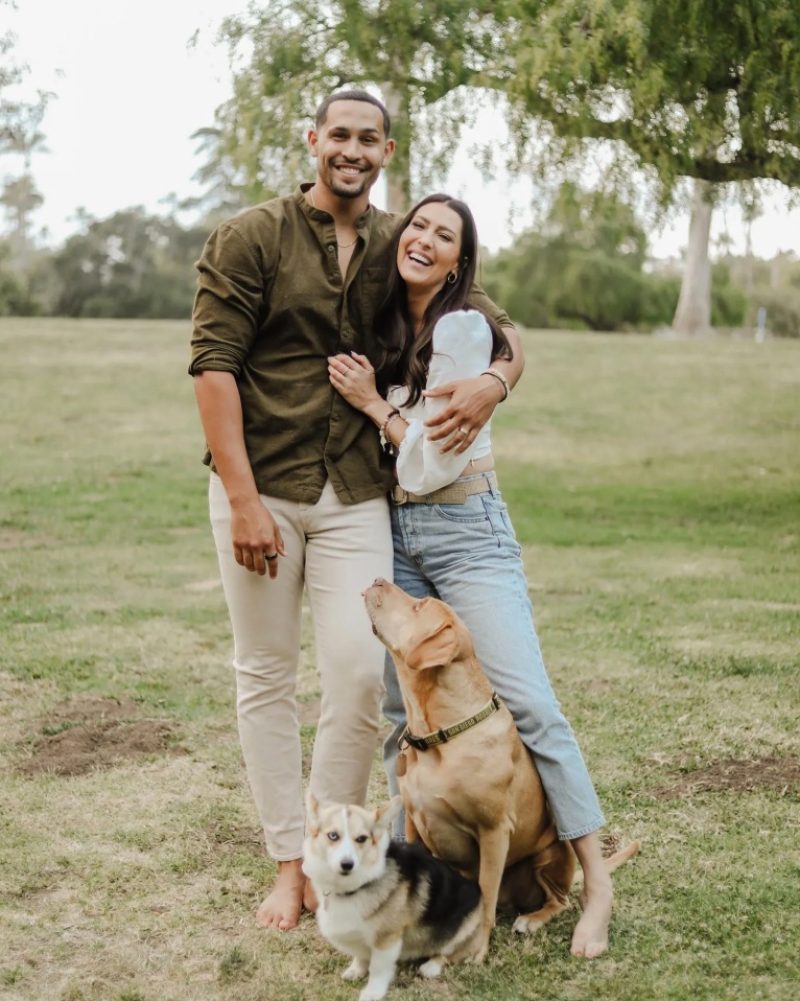 BACHELOR fans are shocked as Becca Kufrin has secretly proposed to her boyfriend Thomas Jacobs in a nontraditional engagement surprise.

Becca told her fans she proposed to Thomas two years after her broken engagement from Garret Yrigoyen.

InstagramBecca announced the untraditional proposal with a twist on Instagram[/caption]

After fans have previously been left heartbroken for Becca after her devastating breakup with Arie Lundrick Jr. on The Bachelor, Becca announced she’s engaged.

Becca shared the engagement photos on Instagram with her now-fiancé Thomas leaning in to give her a kiss on the forehead.

She celebrated with her two dogs, bubbly rosé champagne, and close-up photos of the gold-band ring on Thomas’ finger.

Becca, however, was ringless.

Read More on The Bachelor

Why did Susie leave The Bachelor?

She captioned her post: “In the ultimate plot twist… HE SAID YES!”

Becca gushed: “We’ve been keeping this secret just between us and close family and friends for a while, but we’re so excited to shout it from the rooftops!

“I finally found my chauffeur for life and the one who makes my heart smile every single day. I can’t wait to do it all with you, Tommy.”

She continued on to say: “Thanks for making me the happiest gal alive. I love you to the moon and back.”

Fans poured in their well-wishes for Becca and Thomas as the couple found their happy ending.

One fan posted: “I knew I saw a ring on his hand in a previous post and thought something was up.”

Another said: “I love you are doing things your way! Congrats.”

A third commented: “I’m obsessed that you proposed!”

Yet a fourth remarked: “Yes, power move! Tommy is perfect for you.”

Back in 2018, many Bachelor fans can remember the painful 40-minute “unedited” breakup scene where Arie calls it quits with Becca.

Arie said he was “100 percent betrayed” by the producers as he broke off his engagement to Becca to chose the runner-up, Lauren Burnham.

He claimed the scene was “completely edited” and that he was forced by production to go back inside the house to finish the scene.

After Arie, Becca got engaged to Garrett before calling it quits after two years.

The couple met when Becca was the lead of Season 14 of The Bachelorette.

A source told E! News that their engagement has been called off.

The insider said: “Becca is still very upset with Garrett’s comments and the controversy surrounding it.

“Their lifestyles don’t mesh anymore. Garrett wants different things and they came to a realization that they aren’t compatible anymore.”

According to the informant the pair are “currently living separately.”

The source explained: “Garrett is doing a backpacking trip in the wilderness with his buddies and is taking time for himself. They are trying to keep it low-key because they are still working things out, but the relationship is definitely done.”

Becca and Garrett sparked split speculation after Yrigoyen posted controversial comments in support of police officers amid the Black Lives Matter protests, which seemed to cause a rift between the two.

Amid the ongoing protests throughout the country, Becca spoke up for her support for the BLM movement, while Garrett voiced his appreciation for the “thin blue line.”

The California native was slammed by fans and fellow stars of the Bachelor franchise after he stood up for law enforcement on Instagram.

Becca addressed the backlash regarding Garrett’s post during a June 9 episode of her Bachelor Happy Hour podcast.

She said: “Garrett is my fiancé and I love him and to his core, I believe that he is a good person. What he posted… I don’t align with and I don’t agree with.”

One week later, she addressed the split rumors.

She said during the June 16 episode: “For those who are curious about my relationship with Garrett at this point, all I can say right now is I don’t know.

“I can’t give anything more than that.

“It’s something that we are trying to work through and discuss and do work on at home at this time and that’s where the work will remain and that’s really the best can give you at this point.”

GettyPreviously on The Bachelor, Arie Luyendyk Jr. called off his engagement to Becca in a dramatic extended scene on the show[/caption]