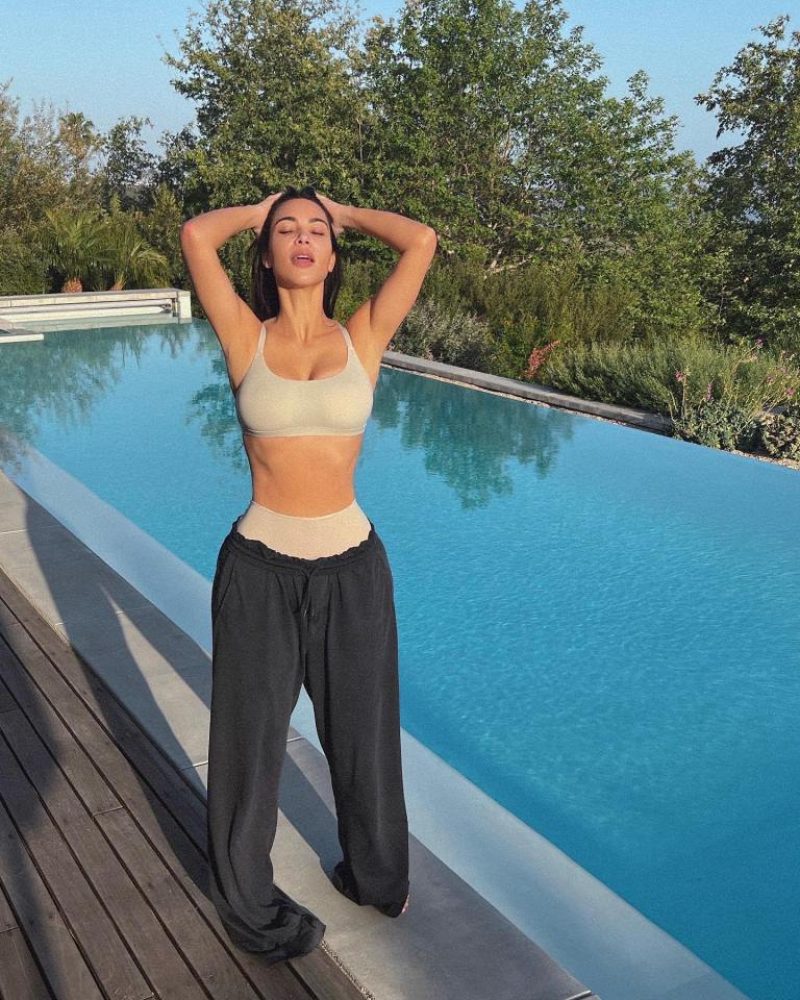 KARDASHIAN fans continue to call out the reality stars for posting editing photos on social media time after time.

Sometimes the Keeping Up With the Kardashians stars own up to it, other times they delete the post and move on.

InstagramFans have repeatedly called out members of the famous family[/caption]

Instagram / Khloe KardashianOccasionally the cop to editing their pics, but more often they delete them[/caption]

Despite being called out for editing their pics, the famous family continues to share slightly altered snaps.

While she typically edits herself in her photos, slimming her figure or smoothing her skin, she occasionally goes a step further.

The KKW Beauty mogul was called out for posting an edited photo of her daughter and Khloe Kardashian’s daughter, True.

More on the Kardashians

Khloe addressed the drama during a podcast appearance, confessing to Not Skinny Not Fat host Amanda Hirsh that she was in on it – kind of, anyway.

“I was like f**k, I f**ked up the lie, I forgot we did this,” the Hulu personality began, referencing the moment she got caught in the act.

Khloe recently shared a video while on a ride with her daughter – who she shares with her ex Tristan Thompson – marking True’s first experience at Disneyland.

Fans, however, recalled photos taken in December 2021, capturing True spending a day at the theme park with her cousin Chicago.

The sister duo aren’t the only ones who have had photoshop issues, however.

Here’s a look at some of the most egregious Kardashian photoshop fails.

In February, the mom of four posted a photo of herself posing in her gym.

In the snap, Kim wore a periwinkle unitard and sneakers.

Fans were quick to point out something wonky about the background, however.

Several commenters noted a piece of equipment behind the reality star appeared bent.

“Curves!.. on the machine behind,” one keen-eyed fan wrote.

Another wrote: “Why is the table bent?”

Khloe has been called out for various photoshopping offenses through the years.

She’s been accused of editing her face in photos, slimming her figure and more.

Most recently, fans have noticed she appears to be editing her fingers in photos.

In January, the mom of one shared a series of sexy snaps in a tiny minidress.

But all anyone could seemingly notice were her garishly long hands and sharp white nails.

Another explained: “It takes .2 seconds to zoom in and see where this was photo shopped. Don’t you have a PR team looking this over before you post it? Just wow.”

One fan blamed the technology: “I know it has to be a bad edit, but I just couldn’t keep to myself when I saw it!”

While a third simply labeled the photos: “#photoshopfail.”

InstagramOOPS! Khloe Kardashian admits she ‘f**ked up’ & confesses to photoshopping pic of True, 4, after fans catch her in ‘major lie’, , Taken without permission: https://www.instagram.com/p/CYKdKbFPkRp/[/caption]

Even the Kardashian kids wound up at the center of photoshopping controversy.

The drama began when Kim shared a photo of her daughter Chicago and cousin True on social media.

They captioned the post: “Khloe said today is True’s first time at Disneyland… the Disney photoshop conspiracy theory is back. I’m sure they had a good reason for having to cover up Stormi in the photos I just think it’s interesting and funny.”

Months earlier, Kim shared photos of the cousins’ day out, leaving fans convinced True’s face was photoshopped on Kylie Jenner’s daughter Stormi’s face to make it look like True was there.

Another Kardashian fan account pointed out that True’s facial look and expression were identical to an older photo of her at the beach.

Khloe cleared up the altered photo’s confusion during an episode of the Not Skinny Not Fat podcast.

After host Amanda Hirsch brought up the mishap that swept the internet, Khloe explained her side of the story.

“I was like f**k, I f**ked up the lie, I forgot we did this,” the Hulu personality began, referencing the moment she got caught in the act.

Khloe recently shared a video while on a ride with her daughter – who she shares with her ex Tristan Thompson – marking True’s first experience at Disneyland.

In April 2020, Kylie came under fire when she shared a snap of herself posing by the pool.

She wore a tiny bikini in the photo, standing on the steps of a large pool up to her ankles with water.

Several fans remarked on the strange alterations to the pool she was posing next to.

The warped and curved concrete pool edge suggested the Kylie Cosmetics founder had used an editing app like FaceTune on the photo, which has since been deleted.

In January, Kim came under fire again after posting a photo that appeared to be not-so-subtly altered again.

The beauty mogul pouted and flashed a peace sign while posing in a baggy cream sweater in the photo, which was taken in a bathroom.

The 41-year-old posted the snap on Instagram on Tuesday, captioning it with lips and peace sign emojis.

Her eagle-eyed followers were quick to notice the apparent editing blunder on her phone.

They speculated that the SKIMS founder had used the retouching app “FaceTune” to thin out her face or give the illusion of more volume in her hair.

Another wrote: “Her phone case is warped on the top left corner (our left). It’s like pulled up a smidge. Why does she need to photoshop her cheekbones.”

One posted on Reddit: “Her phone is warped and I don’t understand why because she’s so beautiful.”

In April, Kim posted a series of snaps from her beach vacation.

She posed in her SKIMS sports bra and underwear set, holding her hands up high as she showed off a light-colored sports bra and matching underwear, under a pair of dark sweatpants.

She captioned the photo: “Sunday in my @skims.”

But fans aren’t having any fun in Kim’s sun, complaining about the apparently altered pics.

“Her waist is most definitely photoshopped,” one fan on Reddit remarked, while another added: “This doesn’t even look real or natural to me.”

Kendall was slammed by fans while appearing in red lingerie for her sister Kim’s SKIMS shoot.

The 25-year-old model was accused of photoshopping the snaps to give herself exaggeratedly smooth and flawless skin.

In 2021, Kim was called out for posting a photo from an ad campaign in which she had an extra toe.

Fans spotted the 40-year-old’s “extra toe” popping out of her perspex heels while she was posing with Kylie in an ad for her fragrance.

The photo from August 2019 showed the mother-of-four and her younger sister wearing matching bodysuits, though it was Kim’s foot that caught the attention of fans.

Many fans became convinced the reality star actually has a sixth toe, which prompted Kim to share a video of her feet in September 2020 to count her toes and prove them wrong.

Khloe snapped a selfie with Kris Jenner, 66, and Martha Stewart as the trio were touring their new twin mega-mansions.

The reality star shared several of the shots on her Instagram page, gushing over the “surprise” meeting her momager set up with Martha.

She captioned the post: “My mom surprised me and we had lunch with the ICON, the QUEEN herself, @marthastewart48

“Queen Martha has always been someone I have adored. She’s ambitious, motivated, kind, funny as hell, she’s bad a**!

“She is organized AF. She throws down in the kitchen. She loves landscaping. She loves animals, loves her CBD And she ain’t no snitch. This is my kind of Queen All Hail “

The 80-year-old designer also shared a photo of the girls standing by the front entrance of Kris’ home along with several other famed designers.

Martha included the caption: “A fun visit at @krisjenner home in California”

One of the shots Khloe posted surfaced onto Reddit where critics ripped the model for adjusting their looks.

In the pic, the Keeping Up With the Kardashians alum stood in the center holding out the camera for Kris and Martha to join in.

The ladies’ facial features seemed defined and their skin looked smoother, making many believe that the pic was altered prior to being published.

Instagram/Martha Stewart, Martha Stewart pays a visit to the new homes of Kris Jenner and Khloe Kardashian in California , marthastewart48, Verified, Wow! House call to @krisjenner and daughter @khloekardashian their new homes are so beautiful, the gardens lush, and the hospitality outstanding We had fun talking business and peacocks![/caption]