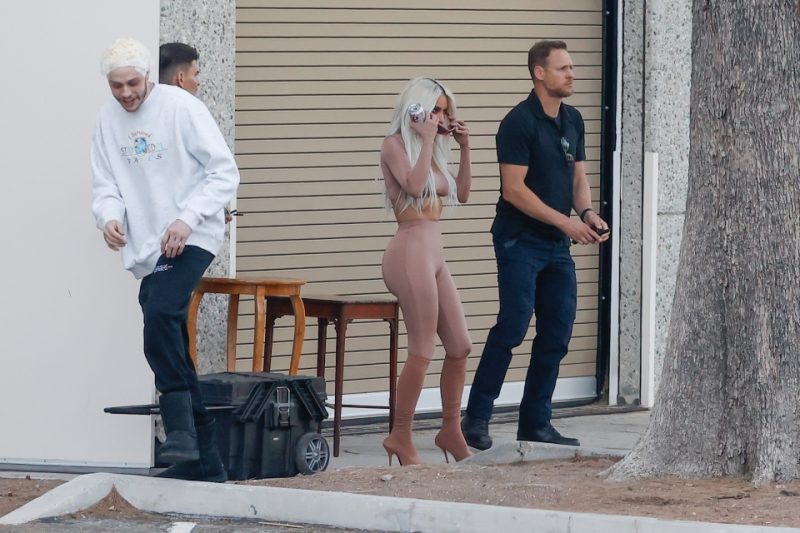 KIM Kardashian and her boyfriend Pete Davidson have been mocked by fans as the “cringey” couple matches with platinum blond hair.

Pete was caught in the action of dying his hair platinum blonde as Kim modeled for her new SKIMS photoshoot.

She was wearing all nude in her SKIMS clothing and showed off her tiny waist in the crop top set.

Pictures from the shoot made their way to Reddit where on fan commented: “I knew they were going to have matching hair.”

One said: “Lol, not them with the actual matching blonde hair.”

Fans then complained: “The dark suited him (and her!) better.”

Another posted: “Looks like someone drew on roots with a Sharpie.”

Other fans noticed Pete was caught on cameras while actually in the process of dying his hair the platinum blonde.

He appeared to be wearing a hair net and waiting for the color to set as Kim was on set.

One fan even speculated: “I wonder if he’s part of the shoot?”

Both Kim and Pete were previously brunette.

Kim has been proudly showing off her blond locks for weeks, but not all her fans are loving it.

Yesterday, she posted a series of snaps from sister Kourtney and Travis Barker‘s wedding.

The newly-shared photos taken last weekend also included her and daughter North sweetly striking a pose – and a cute kiss – but fans simply couldn’t get past the hair.

Another at least called the shockingly casual updo relatable and wrote: “I like it, especially because this is how I wear my hair. I have too much frizz and flyaways to do their slick updos.”

Kim’s ex Kanye West, 44, has continued to slam his ex-wife in his new music.

Kanye accused Kim of only letting him see three of their four kids in his new song.

He additionally claimed Kim’s nannies spy on him while he is there.

Kanye collaborated with the late XXXTENTACION for True Love, which is on his latest album, Donda 2.

In True Love, he claims he doesn’t get to see Chicago and adds that he feels like the kids are “borrowed” when he looks after them.

He raps: “Wait, when you see the kids? I’ll see y’all tomorrow/ Wait, when I pick ’em up, I feel like they borrowed.

“When I gotta return them, scan ’em like a bar code / I only see three kids, who watchin’ Chicago?”

He adds: “And you know all the nannies is Donnie Nesbrasco / Let the kids dig a tunnel to my house like Chapo.”

Donnie Brasco is the name of a 1997 crime drama about an undercover FBI agent who infiltrates a mob gang.

This is not the first time Kanye has hit out at Kim’s parenting of their children.

He previously slammed the Kim for allowing their daughter North to wear makeup and go on TikTok.

Back in February, Kanye also accused Kim of kidnapping Chicago and claimed she thinks he’s put a hit out on her.

Kim debuted her blond look at the Met gala, and it has not been a fan favoriteGettyGettyKim’s ex Kanye West has continued to throw shade at the star in his new music[/caption]