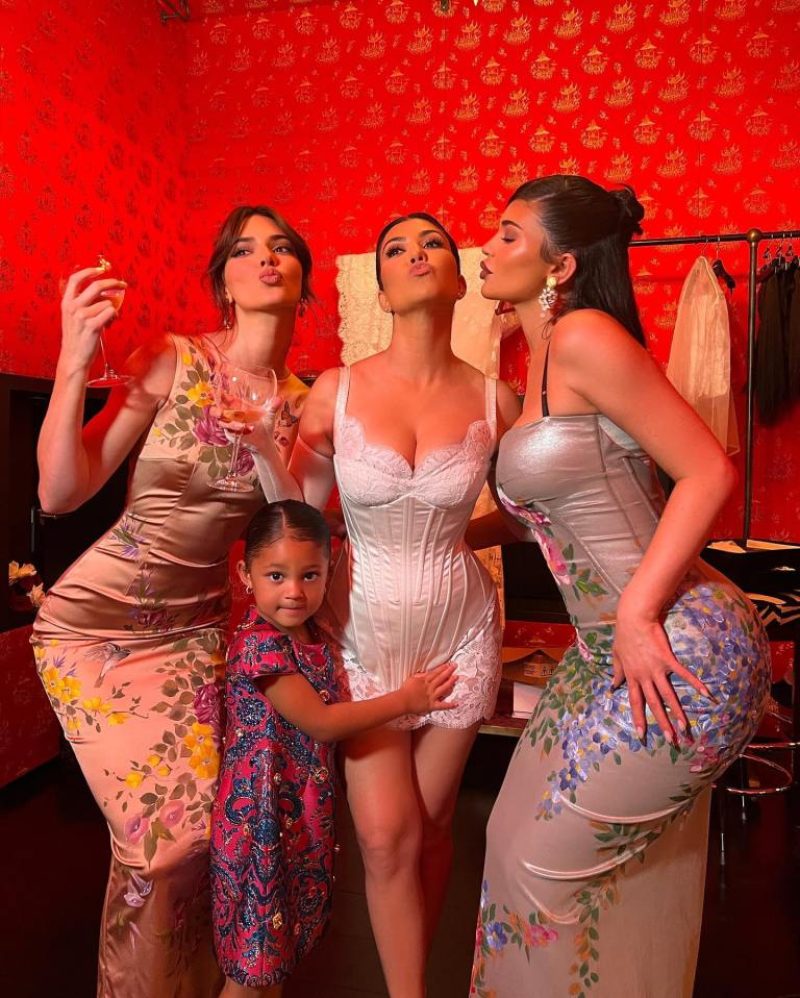 KARDASHIAN fans have claimed that they spotted a “baby bump” in the new photo of Kourtney after the reality star’s huge wedding with fiancé Travis Barker in Italy.

Kylie, 24, shared a snapshot of her stepsister before she walked down the aisle.

In the Instagram photo, Kourtney, 41, posed in a stunning white corset and showed off her long, bare legs.

Kendall, 26, also appeared in the group shot as the three cuddled together before the wedding bells.

Kendall and Kylie wore their floral outfits as they stood inside a red room.

The trio pouted their lips as if they were blowing a kiss at the same time.

She shares her toddler and second child, whose name is still unknown, with rapper Travis Scott, 31.

The Keeping Up With the Kardashians alum captioned the post: “A wife.”

Kourtney replied: “A wife,” along with a bride emoji, a female sign emoji, and red heart emoji.

Kardashian fans jumped to the comments section as they claimed to have spotted a baby hump of the KUWTK star.

One fan said: “Oh my god! Kourtney is pregnant in this pic!”

Another fan wrote: “A wife is pregnant.”

A fourth person added: “There’s Stormi and a baby!”

A commentator chimed in: “Stormi knows something! Look at where she put her hand!”

Recently, Kourtney and her husband Travis, 46, tied the knot in Portofino, Italy.

The couple said their “I dos” in front of their family and friends.

The nuptials were held at the seaside compound of Domenico Dolce and Stefano Gabbana.

They rented out an entire castle called Castello Brown in Portofino for the reception.

Kourtney became the stepmother to his teenage kids: Alabama, 16, and Landon, 18.

Unfortunately, her seven-year-old boy Reign was spotted crying before the ceremony took place.

Reign and his siblings – Mason, 12, and Penelope, nine, reunited with their father Scott Disick, 39, after they had spent several days without him.

THE STROLL IN MILAN

Although KUWTK fans claimed they spotted “clues” that Kourtney might be pregnant, she has not commented on the rumors but has flaunted her bare tummy recently.

The newlyweds were spotted at the main square of Milan, the Piazza Duomo.

While covering up his eyes with shades, the Blink-182 drummer had on a chained choker around his neck.

The rocker was also wearing a black “anti-war” shirt.

The TV personality wore a long-sleeved crop top cut just before the midriff and teased her stomach.

They previously had a courthouse wedding in Santa Barbara and held a Las Vegas ceremony – without obtaining a marriage license – after the musician performed at the Grammys.

InstagramKourtney and Travis were spotted on a stroll in Milan, Italy after the wedding[/caption]