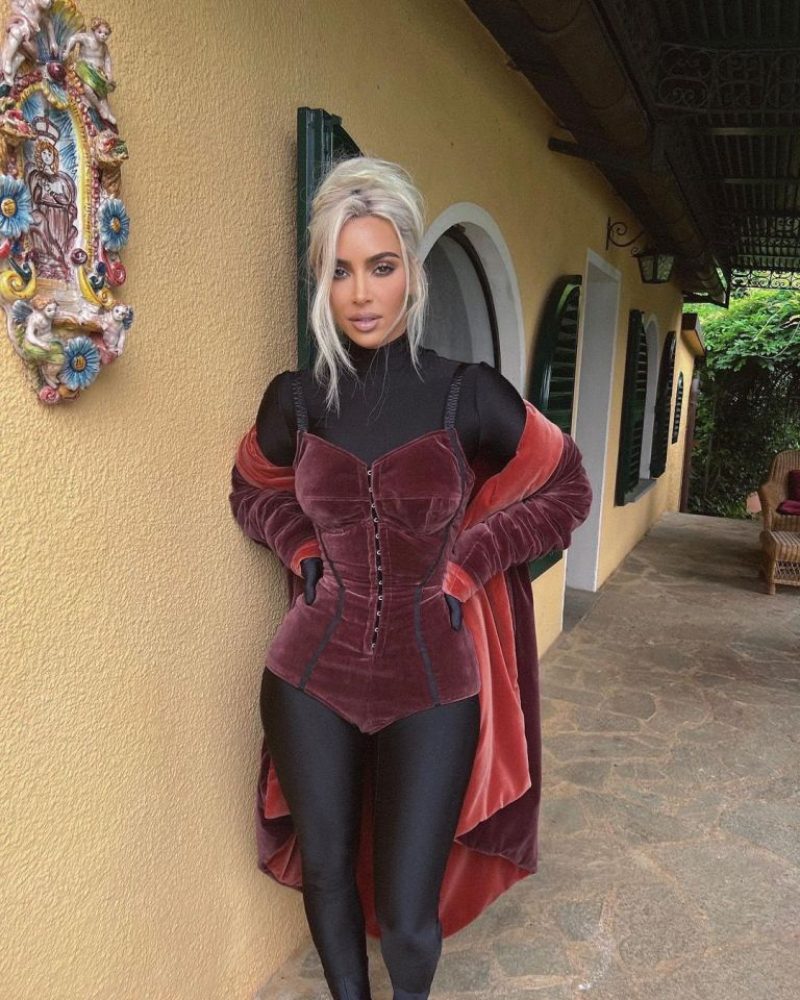 KARDASHIAN fans were all left thinking that Kim looked just like a famous Marvel character in new pictures.

The reality star flaunted her curves in a bodysuit and a sexy corset.

Taking to Instagram, 41-year-old Kim shared a series of photos from her time in Italy.

She and the whole Kardashian family traveled to Portofino to watch 43-year-old Kourtney Kardashian get married to Travis Barker, 46.

Wearing a red velvet corset by Dolce & Gabbana, the KUKTK-alum showed off her tiny waist as she leaned against the wall of an Italian villa.

The mom-of-four teamed the sexy number with a matching coat draped elegantly off her arms.

In the last slide, Kim shared a throwback image of Monica Belluci, who was synonymous with Dolce and Gabbana in the 90s, wearing an identical outfit

But the luxurious get-up left fans thinking of a different muse.

Many pointed out that Kim’s look reminded them of Elizabeth Olson’s portrayal of Scarlet Witch, also known as Wanda Maximoff, in the Marvel Cinematic Universe.

Another exclaimed: “Scarlet Witch!” while a third chimed in: “Wanda!”

Kim is known to copy looks from Hollywood and her favorite fashion icons.

In fact, the SKIMS mogul has taken inspiration from stars including Cher, Naomi Campbell, and Helena Christensen.

Recently, Kim and her boyfriend Pete Davidson, 28, went back to the 60s as she arrived at the Met Gala dressed in Marilyn Monroe’s $5m dress.

The piece, which Kim had to lose 16 pounds to fit into, is so famous because it is the dress that the Hollywood legend wore when she sang Happy Birthday Mr. President for John F Kennedy at Madison Square Garden in 1962.

It now lives at Ripley’s Believe It Or Not! museum in Orlando, Florida.

Kim wore the historic dress to make another bold statement at the Gala after years of show-stopping outfits.

By her side, SNL-alum Pete also channeled the golden age of Hollywood in a black suit with a skinny tie and sunglasses.

Kim and Pete Davidson have been dating since October 2021Getty