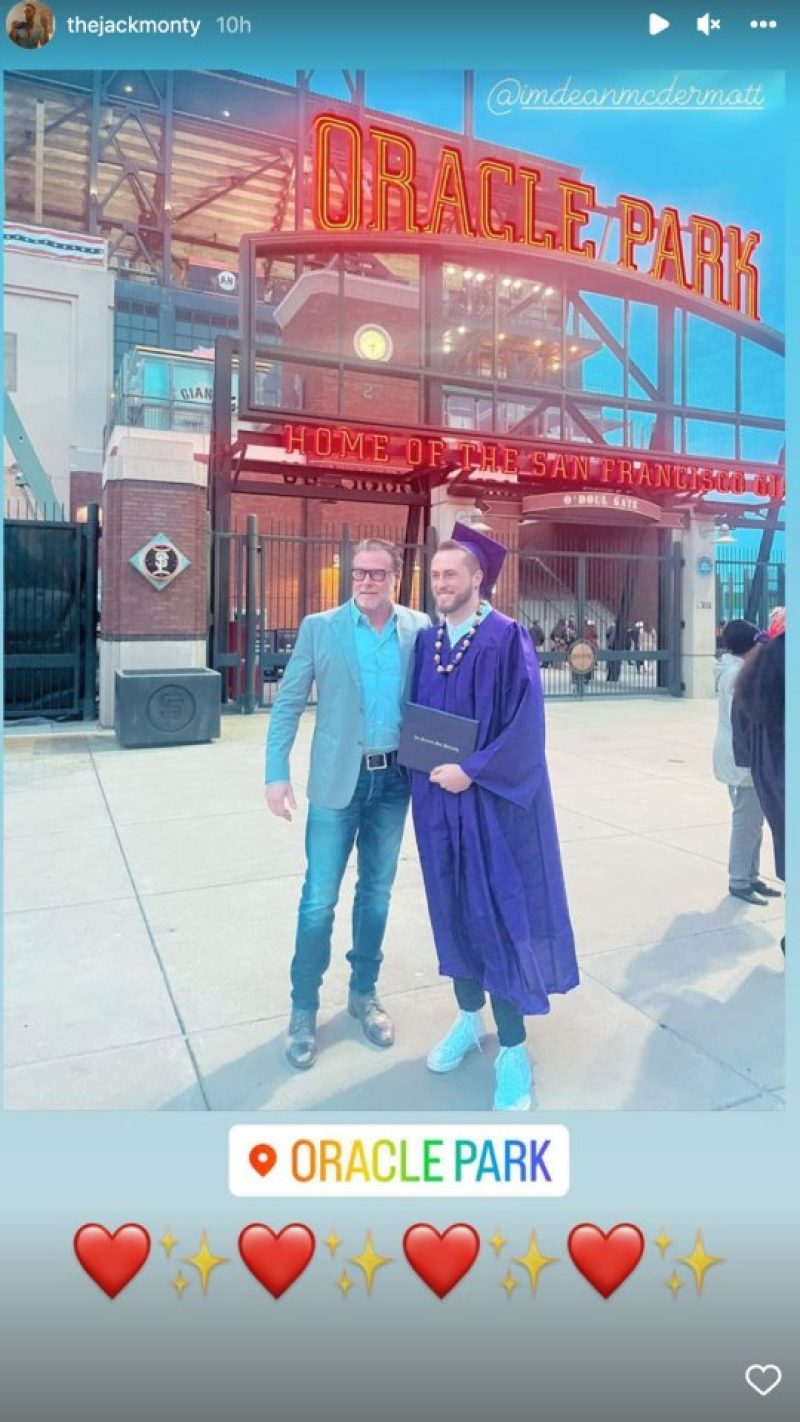 TORI Spelling and Dean McDermott have dropped another hint that they have secretly split.

The actress was suspiciously missing from a big family milestone.

Dean posted a photo of himself, his son, and his ex, Mary Jo Eustace, at Jack’s graduation.

“So proud of this young man!! He graduated SFSU today!! So grateful to take part in this celebration and journey with @thejackmonty and @maryjoeustace #sfsugrad #hardwork #dad #proud,” he captioned the photo.

Even though Dean and Mary Jo are Jack’s parents, he and Tori got close over the years.

As his step-mom and wife to Dean, she would probably be expected to be at an important event like this.

Her absence just fuels the rumors that the couple has split.

Jack also posted photos to his Instagram story with his dad and then another with his parents and his half-sister, Lola.

“Mi Familia,” he captioned the photo as he hugged Lola.

He even posted photos of his friends who showed up to see him graduate.

“Shoutout to these two for showing up to my graduation and supporting me. Love you two!” Jack wrote on the photo.

So, unless Tori was the one taking the pictures, she was not there to see her stepson graduate.

She has also not posted about the event on social media.

Tori and Dean did not acknowledge their wedding anniversary earlier this month on social media.

The controversial couple tied the knot on May 7, 2006, in Fiji, but the day passed over with no recognition from either.

Another sign that the actors have split is that Dean has been seen out without his wedding ring on.

The father of six was noticed in Los Angeles at the LA Kings Valley Ice Center without the jewelry.

Throughout 2021 and into the new year, the couple has been repeatedly spotted in public going solo without their rings.

In March of last year, Tori was seen out with the family at a farmer’s market with a missing wedding band.

In July, Tori again ditched her ring on a gas station run, where days after, Dean was spotted fueling up with a bare hand.

In October of 2021, Dean was seen ringless and flirting with a soccer mom.

Then, in November, Dean was spotted chowing down on a Big Mac yet again without his ring.

In an exclusive interview with The Sun, Tori, 48, revealed that she will be returning to reality TV with a new “cooking show.”

“I have a new series that I’m filming, it’s kind of a mix of reality and food and cooking cause I love to cook and bake and do DIY with my family,” she explained while promoting Hydroxycut.

“Like that’s my jam. Any of my fans who love that part of me is gonna be in love with this series.”

Tori continued on to say that fans will “get to see kind of a fall out of reality and life as well” and that the series “will be premiering this summer.”

The TV star has already begun filming the new show it seems, as she took to her Instagram story in February to share a photo on set.

The blonde snapped a picture behind the scenes of a room filled with camera equipment, as her dog napped amid the chaos.

“Day 1 of filming my new TV show and Monty already made himself real comfortable with the camera crew,” she captioned the shot.

Although they have children from other relationships, the actors share five children together- Liam, Stella, Hattie, Finn, and Beau.