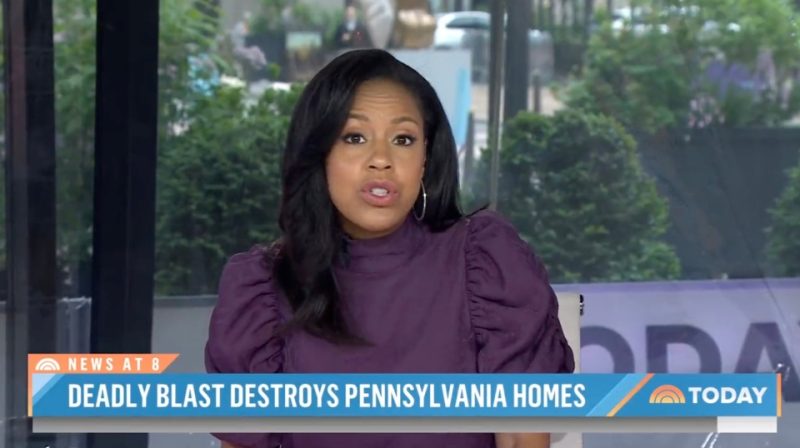 TODAY fans have blasted the show’s third hour hosts for making a major error during its coverage of Thursday night’s Pennsylvania home explosion.

Anchors Sheinelle Jones and Craig Melvin have shared an update with viewers on the latest happenings with the incident, but viewers pointed out a mistake in the reporting.

During Friday’s broadcast of 3rd Hour of TODAY, Sheinelle broke down the latest on the devastating explosion in Pennsylvania.

She told viewers: “At least four people killed and two others injured overnight when an explosion destroyed or damaged several homes in Pottstown, Pennsylvania.

“That’s about 40 miles southeast of Philadelphia.

“Rescuers spent the night going through the rubble, checking for additional victims and survivors.”

The NBC anchor added: “Federal investigators will be on the scene today to help local officials find the cause of the blast.

“All schools in Pottstown are closed today.”

After tuning in for the news report, fans slammed the host for sharing the incorrect locale of the incident.

While it did, in fact, occur in Pottstown, they pointed out that the city’s location compared to Philadelphia was not as she described.

One upset fan tweeted: “Pottstown is NOT southeast of Philadelphia. We are northwest of the city.”

Another wrote: “FYI Sheinelle, Pottstown is not 40 miles ‘SouthEast’ of Philadelphia, but NJ is…”

Though they were angered by the error, they did “thank” her for “sharing this” heartbreaking story.

The explosion was reported right around 8.30pm, and there were also reports that a fire erupted after the explosion.

Around 60 people have been displaced.

Photos from the scene showed cops roping off areas around downed poles and wires.

Cars in the neighborhood sustained damage as well, according to local reporter Evan Brandt.

He shared a number of photos and videos from the devastating scene on Twitter, saying residents and first responders were left “stunned.”

Neighbors in the area reported hearing a loud bang, according to a local NBC affiliate.

Reports indicated that some residents on the street and in the area were being treated for shock following the explosion.

Any Pottstown residents affected or displaced by the explosion should go to Pottstown High School for assistance.

Temporary housing is being set up for those displaced by the blast.

Pottstown schools Superintendent Stephen Rodriguez announced that all schools in the district would be closed Friday as a result of the explosion.

“Our thoughts and prayers go out to those families,” he wrote.

The superintendent added: “When schools open again, our counselors and psychologists will be available to provide support.”

Not known, clear with picture deskViewers thanked Sheinelle for sharing the story but slammed her for an error in the report[/caption]

Not known, clear with picture deskThey pointed out that she said Pottstown, the location of the explosion, is ‘southeast of Philadelphia’ when it is actually northwest[/caption]