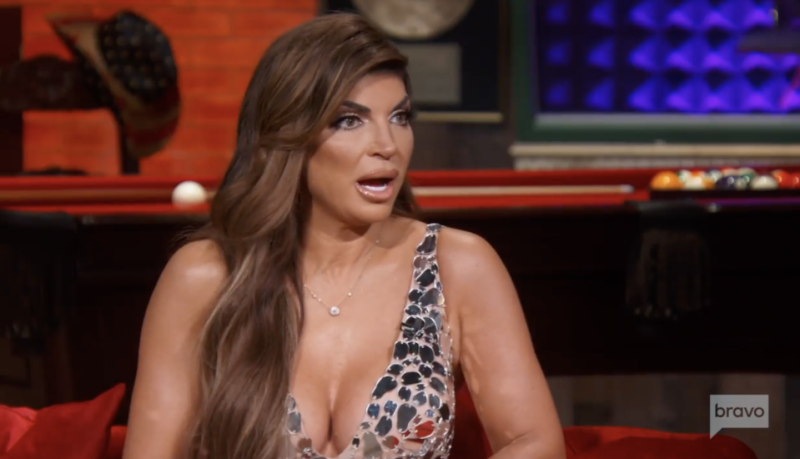 TERESA Giudice has clapped back at her former co-star, Caroline Manzo after the RHONJ alum threatened to “smack” her.

The reality star is not happy with the comments her ex-pal made about her on the podcast, “Dear Albie.”

BravoTeresa Giudice responded to the comments her ex-BFF, Caroline Manzo, made on the podcast, Dear Albie[/caption]

It all kicked off after Caroline appeared as a guest on the podcast hosted by her son, Albie, where she brought up her longstanding feud with Teresa.

The Bravo alum, 60, said she had enough of Teresa, 50, pointing fingers at her for allegedly alerting the IRS of her tax fraud schemes.

Teresa had some choice words in return for her former BFF, telling TMZ: “She didn’t knock the s**t out of me the entire time she was on the show, that’s why I’m still there and she’s not.”

She added: “She’s promoting her son’s podcast so she talks about me because otherwise, no one is paying attention.”

Caroline left RHONJ after season five – but she and Teresa reunited in a Superbowl commercial last year.

Teresa claimed there was no bad blood between the pair during their commercial, making Caroline’s remarks even more odd.

“In person, she was hugging me. On her son’s podcast, she wants to fight me,” she said.

The pair’s beef goes way back as Teresa accused Caroline and ex-RHONJ star Jacqueline Laurita of outing her wrongdoings to the IRS.

The mom of four served 11 months in prison for the crimes.

Her now ex-husband, Joe Giudice, had a longer sentence, serving 41 months in prison, and he was deported to his native, Italy, following his release.

Teresa made the accusations in a Fall 2019 interview with Andy Cohen, where she called her former co-stars out for their alleged involvement in her arrest.

“How could she predict that [we were headed for legal trouble]? Could she have anything to do with what happened to Joe and I?” she raged. “Is she a rat?”

Carolina responded to the rat accusations on Dear Albie and noted that “it’s not even worth me responding to, of course not.”

“First of all, I had no knowledge of anything they’ve ever done in their life, you know?” she retorted. “At the time, Teresa had had an abundance of legal issues and it was all over the press.

“The writing was on the wall that something was going to happen because the indictment was so big. So you don’t need to be a rocket scientist to figure it out.”

In addition to her fight with Caroline, Teresa has been dealing with assault accusations toward her fiancé, Luis Ruelas.

Luis, 48, was accused of shoving his ex Marisa DiMartino during a clash over their finances in front of their son.

Marisa “reported that after her estranged husband dropped off the children the two began to argue over finances,” according to a police report obtained by Page Six.

“The dispute became heated and culminated with [Luis] pushing [Marisa] into a metal support pole in the garage.”

On October 4, 2012, the alleged incident took place in Orangetown, New York, where they lived before divorcing a decade ago.

Marisa – who shares two teenage sons, Louie Jr and Nicholas, with Luis – filed a report one day after the alleged incident.

The report continues: “This action took place in the presence of the couple’s son. [Marisa] refused medical attention and was adamant that she did not wish to sign a charge.”

Marisa did not press charges against Luis, so no arrest was made for the suspected harassment offense.

Real Housewives star Teresa and Luis have been engaged since October 2021, one year after Teresa finalized her divorce from her ex, Joe.

Getty – ContributorIn a 2019 interview with Any Cohen, Teresa called Caroline a ‘rate’ for outing her to the IRS[/caption]

BravoShe got engaged to Luis, one year after her divorce from her ex-husband, Joe Giudice, who she shares four daughters with[/caption]