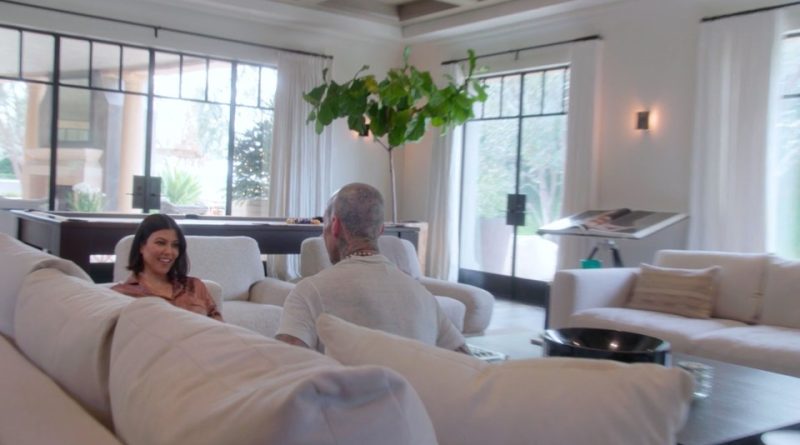 IN THE latest episode of The Kardashians, Kourtney showed off her $9 million LA mansion.

She sat in the living room with Travis Barker as the sun shined through the window.

HuluKourtney Kardashian shows off her mansion as she talks with her now-husband, Travis Barker[/caption]

HuluBehind Travis’ head, you can see a piano and fireplace[/caption]

The scene started off with a look at the outside of the mansion, which features a pool and firepit.

Then, it goes inside the living room.

Kourtney‘s furniture is all off-white with tan pillows.

As she talks about her and Travis’ cleanse to try to get pregnant, fans can spot more of the room.

The living room features a pool table by the big, open glass windows.

Behind Travis’ head, you can see a cozy fireplace that was up and running next to a white chair and footstool.

Next to the fireplace is a smaller black piano.

Then as Kourtney stands up, there is a big book resting on a podium next to the big sliding door, and next to that is a tiny end table.

The sliding glass door leads out to the backyard.

The white furniture is accented by black objects including bowls, vases, and statues on various tables.

When she talks to the camera, a picture can be seen behind her, which is tan with black accents.

On the other side is a black cabinet with various items in it.

At one point, she runs up the stairs, which has a black railing and open glass windows next to it.

When Kourtney comes back to the living room, you can see a checkers board and another game on the table.

Plants, pictures, and tables are placed around the room as well.

After the couple talks to each other for a little bit, a woman named Martha, who Kourtney explains is an Ayurvedic expert, enters the house.

During that scene, fans got a glimpse into the entryway of the house.

Again, the white walls are accented by black doors.

The hallway was very plain with another tall glass window.

The floor turns from wood to white limestone as Martha enters further.

Then there’s a big foyer-like room that looks like it connects other rooms to each other and has marble columns.

A huge table sits in the middle with books and other objects on it.

A plant and a white statue sit in the corner.

The glass window shows off the outside, which features white patio furniture.

The doors and archways are brown wood, which accents the room perfectly.

THE REST OF THE HOUSE

Earlier this year, Kourtney filmed a video with comic, Benny Drama, that showed off more of her $9 million mansion.

In the video, fans get to see her bathroom, kitchen, bedroom, and closet.

Her 11,500-square-foot Tuscan-style abode features a massive lounge-style main bathroom that is often splashed across her Instagram page.

It features a two-person freestanding lily-white tub with a comparable model starting at $2.6K.

The room also includes a wooden stool for dipping in and out, priced around $300, and a hand-knotted rug, according to an earlier AD story, that costs $6K for a similar style.

The bedroom is minimalist and beige and there appeared to be a framed photo of two ultrasounds with handwriting to the left of the modern king-sized bed.

Entering the kitchen, there is a  built-in wood bar was shown with all the fixings where a framed photo of Kourtney and Travis perhaps purposefully sat, as did bottles of Kendall Jenner’s 818 Tequila in a row.

The modern kitchen was also shown in the comedy skit, with two huge islands, grey cabinetry, and a fridge stocked with beverages.

She even has a home gym in her house, which featured two large pilates machines in light wood and what appeared to be a large white tanning bed.

The 42-year-old bought the mansion from retired football player Keyshawn Johnson for $7.45M in 2014.

She once shared the home with ex Scott Disick, with whom she also shares kids Mason, 12, Penelope, nine, and Reign, seven.