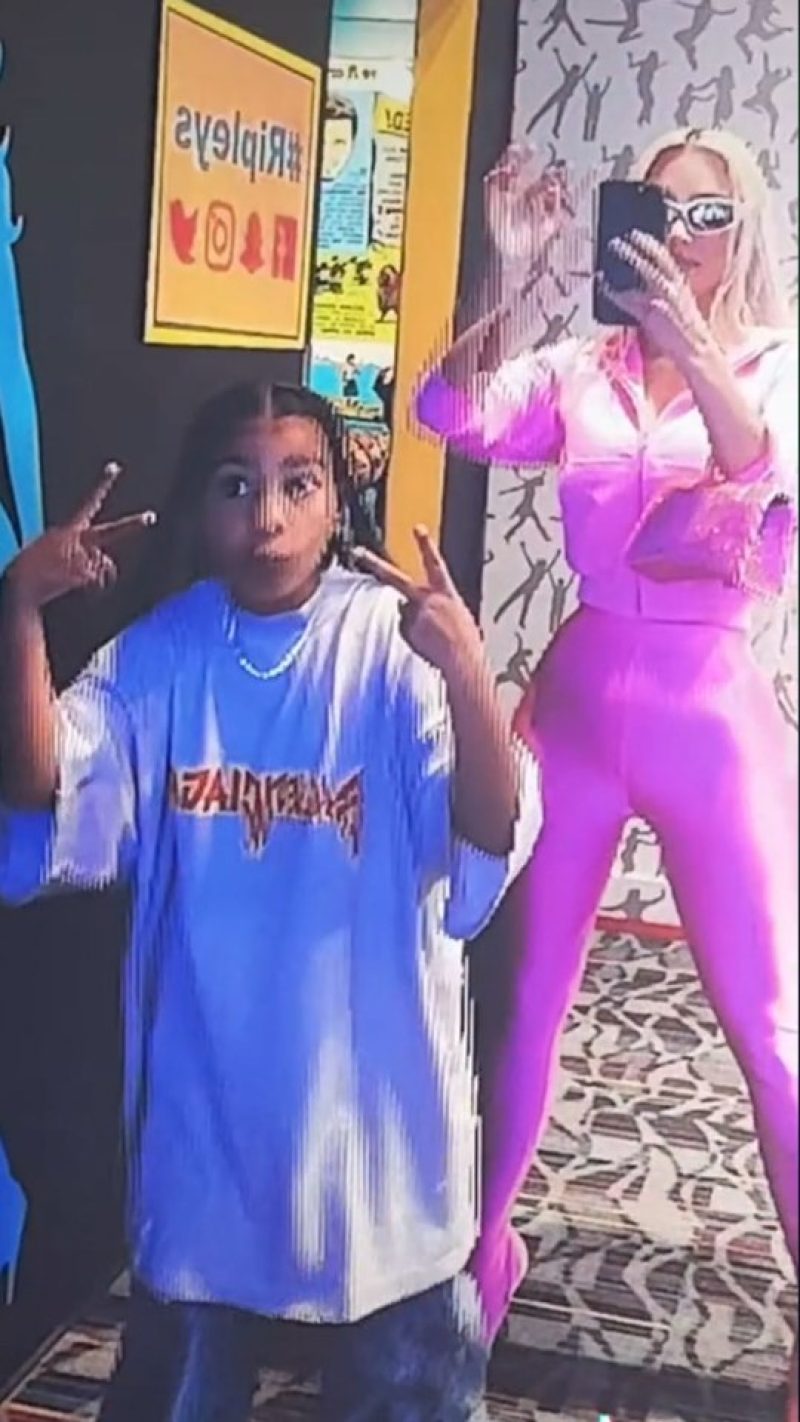 KIM Kardashian’s daughter North has shown off her goth style in baggy jeans and t-shirt for TikTok with mom.

Kim, 41, recently came under fire for allowing North to wear a corset for sister Kourtney Kardashian’s wedding to Travis Barker.

TikTokKim Kardashian and daughter North, 8, pose in front of a large screen[/caption]

A TikTok video, posted to Kim and North’s shared account, shows Kim recording North as the latter dances in front of a wall-sized screen.

Kim wears a tight, hot pink bodysuit as she paces from side to side with her phone held at face level.

North, eight, displays shades of dad, Kanye West, as she dances around the room while rocking a baggy goth-inspired fit.

The mom and daughter appear to be visiting some type of arcade as the giant screen plays back their images with a distorted funhouse effect.

Fans weren’t able to react to the short video as the comment function has been turned off.

The all-black, off-the-shoulder ensemble had long sleeves, black high heels – and a cross necklace to match her young daughter’s.

The SKIMS founder rocked her newly long blonde locks as she walked, holding North’s hand as they boarded a boat for lunch ahead of sister Kourtney’s big third wedding bash.

But fans soon became concerned with what North was wearing.

North donned a constrictive beige corset with a fur pink coat and lattice pants – pairing the layers with a cute bejeweled purse.

On Reddit, one user half-encouraged: “Other than being age and weather inappropriate (I hope Kanye [West] has a word with Kim about repeatedly dressing their 8 yo in corsets.. it’s f**king weird) this is a fabulous outfit.”

But others had concerns as well.

“I agree the mom in me doesn’t like the corset on an 8yr [old],” another wrote.

A third commented, “can’t understand why a child is wearing a corset.”

A fourth wrote, “May in Italy and this poor child in a coat.”

As a fifth agreed with the outfit being too much in the heat, writing: “She must be melting.”

While one more wrote: “Hopefully she’s not suffering too much for fashion.”

Webster defines a corset as “a woman’s tightly fitting undergarment extending from below the chest to the hips, worn to shape the figure.”

In another recent video, North was behind the camera as she captured mom Kim “awkwardly” dancing at Kourtney and Travis Barker’s wedding.

The family shared plenty of photos and videos from the special day, but fans were most excited to see a recap TikTok created by North.

The little girl took to her account that she shares with her mom to post a compilation of clips from the lavish reception.

In the video, fans could see the whole Kardashian-Jenner clan dancing to a DJ with colorful decor and wild pyrotechnics in the background.

Kim, Kris, Kylie, and Khloe could be spotted jamming to the music in their formal Dolce and Gabbana wear.

North snapped short clips of the floral arrangements, selfies with her mom, the colorful lighting, her long black kimono outfit, and a buffet filled with Italian delicacies.

But fans were more concerned about Kim Kardashian’s dance moves, as many flocked to Instagram to troll her as “awkward.”

“Oh the awkward dancing,” one wrote, while a second snarked: “They all should of taken dance lessons. They honestly can’t dance. But I guess it’s fun. Nice.”

A third noted: “Not a one with any rhythm lol.”

“Why do they look so awkward,” another asked.

“None of them can dance. Lol,” a final ranted.

InstagramKanye with his and Kim’s children North, Saint, Chicago, and Psalm[/caption]