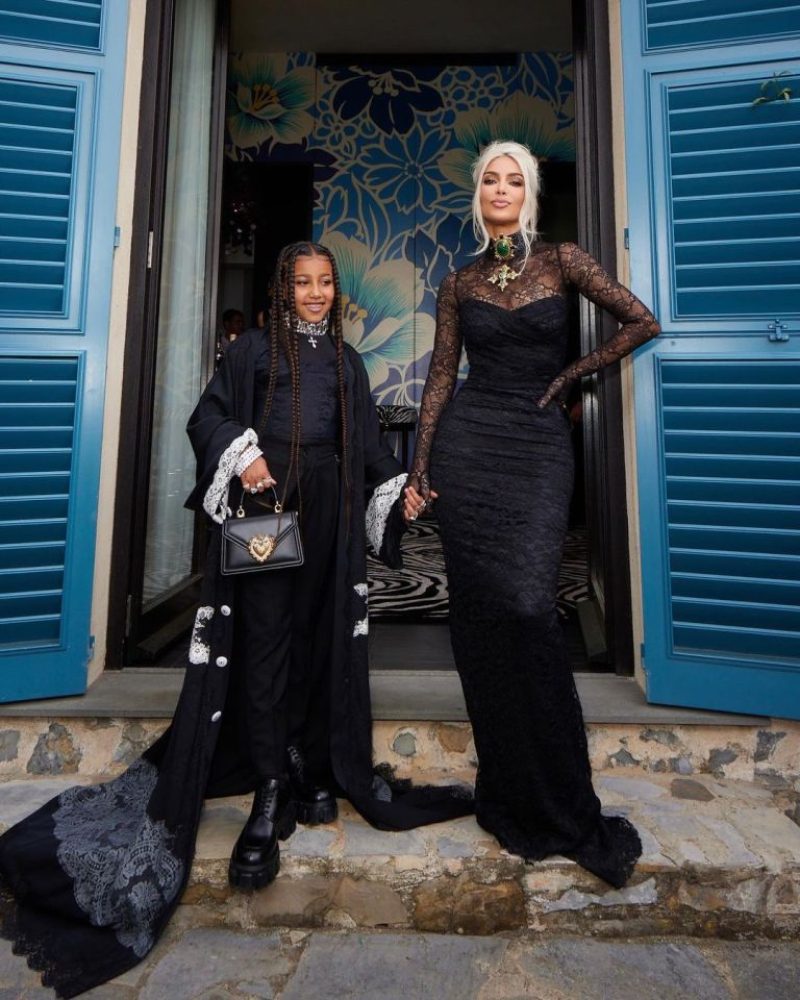 KARDASHIAN fans are now claiming that a member of the famous family upstages bride Kourtney in new photos from the star’s Italian wedding.

Kourtney, 43, celebrated her love with husband Travis Barker, 46, last weekend in a beautiful wedding surrounded by family and friends.

alabamaluellabarker/instagramHowever, some fans think one particular family member stole the thunder from Kourtney, who is here with Alabama Barker[/caption]

It all kicked off after Kim, 41, took to Instagram to share new snaps from the big event, the first which features the mom of four posing in a tight, black lace Dolce & Gabbana dress.

In the pic, Kim’s hair is in an updo as she flaunts her outfit.

Other photos included Kim with her eldest child North, eight, who rocked a black cape and corset topper as they both posed with Khloe.

Kourtney, in her wedding dress, also interacted with North in another snap.

more on the kardashians

However, when the post was re-posted on Reddit, fans claimed it was one member from the Kardashians who actually stole the show: North.

One fan said: “The North pics are cute. Thats all I’ll say as another added, “North was the best dressed of the entire Italy trip. Girl ate and left no crumbs.”

A person chimed in: “The North and Kourtney one is really cute. I prefer pics where it’s more in the moment than posing. It also feels authentic.”

Although, some said that it was Khloe, 37, who actually upstaged the bride as they wrote: “Khloe’s wedding outfit was so freaking gorgeous. That crown is everything.”

North clearly lived it up at the wedding as fans got to see a recap of the big day on her TikTok.

In the clip, fans could see the whole Kardashian-Jenner clan dancing to a DJ with colorful decor and wild pyrotechnics in the background.

Kim, Khloe, sister Kylie, and mom Kris, 66, could be spotted jamming to the music in their formal wear.

North- who previously wore a satin corset which led to Kim being ripped- even posted short clips of the floral arrangements, selfies with her famous mom, the colorful lighting, her long black kimono outfit, and a buffet filled with Italian delicacies.

However, some fans were more concerned about Kim’s dance moves, as many flocked to Instagram to troll her as “awkward.”

“They all should have taken dance lessons. They honestly can’t dance… one critic said.

Kourtney and her Blink-182 drummer beau said their third “I dos” on Sunday, May 22 in Portofino, Italy.

The couple rented out an entire castle for the reception, and the ceremony was held at Domenico Dolce and Stefano Gabbana’s seaside compound.

The whiplash-inducing wedding weekend comes after the duo’s legal marriage at a courthouse in Santa Monica and Las Vegas nuptials that were “just for fun” in April.

Kourtney’s ex Scott Disick and her brother, Rob, did not attend the event.

Kylie Jenner/InstagramKourtney, however, also stunned in her wedding dress as here she is walking alongside her mom, Kris Jenner[/caption]