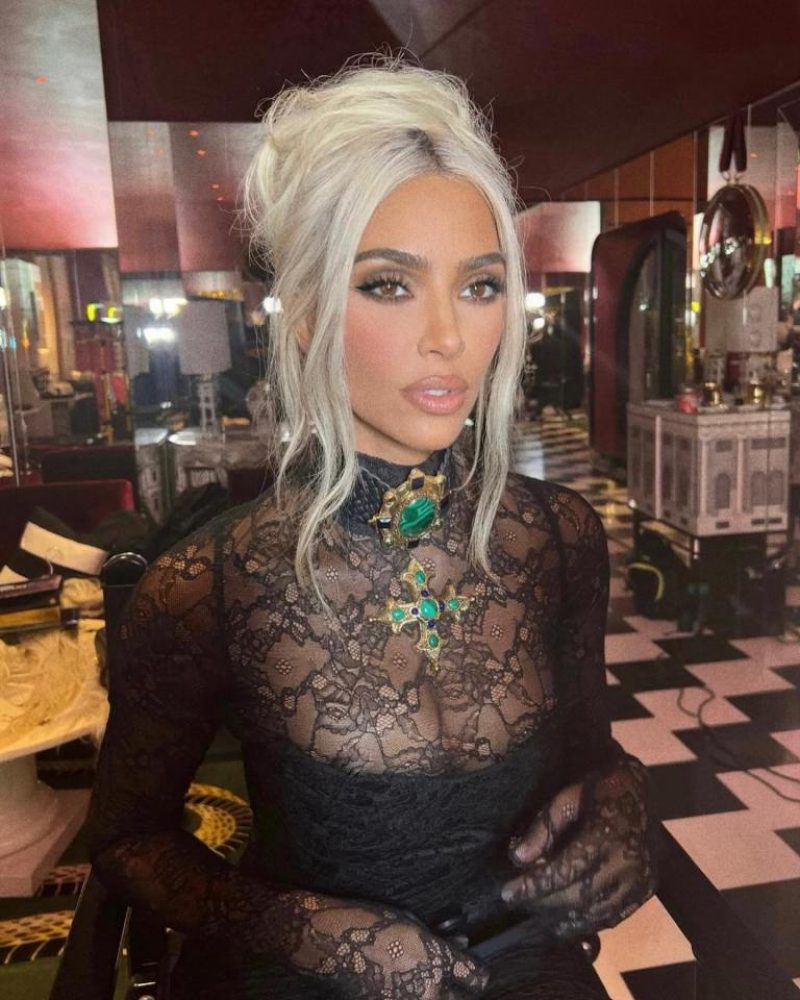 KARDASHIAN fans have slammed Kim’s blonde hair as “messy” in a new photo.

Some even compared her Instagram updo to a “bird’s nest” as others BEGGED her to “go back to her natural color.”

Kim, 41, went bleach-blonde earlier this month and hasn’t looked back.

And on Friday, the Keeping Up With The Kardashians alum shared new snaps to Instagram from sister Kourtney Kardashian and Travis Barker’s wedding with her hair wildly on display like never before.

Posing in an updo, she looked off to the side in her black-gloved Goth dress many fans earlier unfortunately likened to “a funeral,” and captioned the post: “Kravis Forever.”

The newly shared photos taken last weekend also included her and North sweetly striking a pose – and a cute kiss – but fans simply couldn’t get past the hair.

The snaps flew to Reddit where some were missing her natural brunette look she had for almost all of her E! show and many wished she’d go back to basics.

One user harshly began, “I hope this bird’s nest hair phase of hers ends soon.”

Another defended on her wrapped-up blonde bun, “I actually love it. I love a messy updo, even if it’s intentionally done.”

A third wrote, “Not sure if you are aware but the 90’s and early 2000’s are having a big comeback in fashion, beauty and hair.”

As a fourth replied, “I know but I’m not ready for this comeback.”

A fifth at least called the shockingly casual updo relatable, writing, “I like it, especially because this is how I wear my hair. I have too much frizz and flyaways to do their slick updos.”

At the beginning of May, Kim boasted about losing 16lbs in three weeks to fit into the Marilyn Monroe dress for the recent Met Gala– when she first went blonde to match Marilyn.

She attended the fashion event with her comedian man, Pete Davidson, 28.

Kim also told Vogue on the red carpet, “I’m going to stay blonde for a while.”

The SKIMS founder has since flaunted her tiny figure and platinum locks in a shiny and silvery outfit while attending a SKIMS staff party, and all wedding long in Portofino.

Kourtney and Travis’ big Italy ceremony came after they had a courthouse wedding in Santa Barbara and Las Vegas nutiuals – without obtaining a marriage license.

Kris Jenner, 66, boyfriend Corey Gamble, Kendall Jenner, 26, and her boyfriend Devin Booker, 25, Khloe Kardashian, Kylie Jenner, Kim Kardashian and nearly all of their respective children were there and had a pasta-piled reception.

But many thought sister Khloe looked the best in her crown and gorgeous dress.

Kim shares North, eight, Saint, six, Chicago, four, and Psalm, three, with her ex-husband, who has had difficulty seeing her move on with her new SNL-star boyfriend as their divorce is still not finalized.

Instagram / @kimkardashianHer hair has stayed blonde since, and in her new Instagram wedding photos from Italy she sweetly posed with North, 8[/caption]