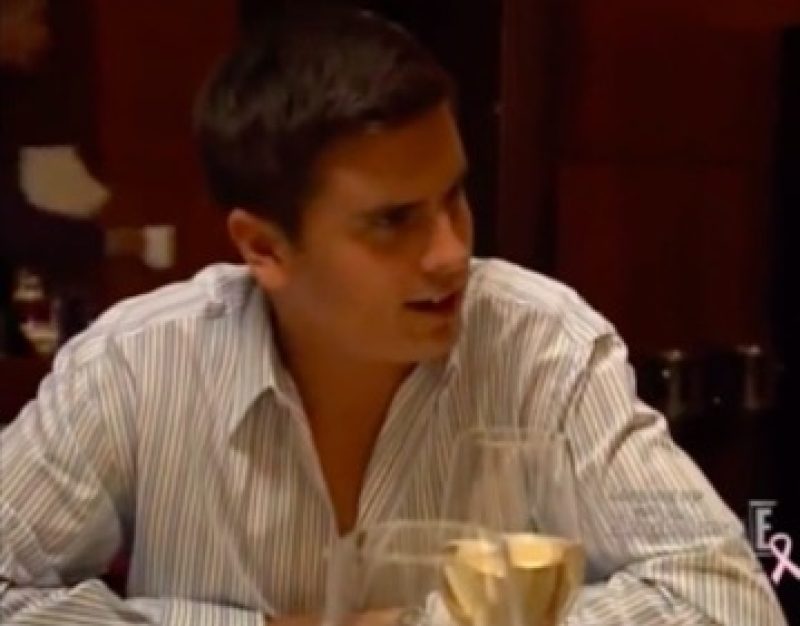 KARDASHIAN Fans have called out Scott Disick for his problematic behavior in his very first Keeping Up with the Kardashians scene.

Scott, 38, has recently had issues with the other Kardashians/Jenners since ex Kourtney Kardashian’s engagement to now-husband Travis Barker.

E!Scott denies Kourtney access to her phone In the Keeping Up With the Kardashians clip[/caption]

The clip, posted to a KUWTK Reddit board, shows Kourtney, 43, and Scott dining at a popular Hawaiian fusion restaurant.

It starts with Scott flexing his standard nonchalant swagger when introducing himself and then-girlfriend Kourtney to the waiter.

He starts to drink his wine when Kourtney yells at him to “wait.”

She continues: “Cheers? You don’t even say cheers?”

“I forgot,” he apologizes as he clinks their glasses together.

The clip then switches to a confessional where Kourtney introduces the Kardashians‘ audience as well as the American public to Scott for the first time.

“My boyfriend’s name is Scott. We were friends for about a year and then started dating and [we’ve] been together ever since.”

The clip returns to Roy’s restaurant and the usual Scott behavior Kardashian fans are all too familiar with begins.

Kourtney asks for her phone to which Scott replies “No,” while casually wiping his mouth.

“Why?” questions the Poosh founder.

Ignoring her question, Scott picks up her phone stating, “Let’s see if anybody even contacted you.”

“No, I want my phone now,” demands the eldest Kardashian while applying lip gloss.

Suddenly agitated Scott asks: “For what?” explaining, “You always give me s**t for talking on my phone at dinner.”

The Talentless founder’s patented snark is in full effect.

“Do you need to contact your wireless server for some reason?”

Kourtney, giving up on her phone, states: “You’re obviously in a really annoying mood.”

Scott places the cherry on top with a final condescending remark: “Is that right? At least your hair looks nice… with your $5,000 extensions.”

Other fans commented on Scott’s behavior in the Reddit thread.

One wrote: “Take out the music and sound effects and it’s just a guy being sh**ty to his girlfriend.”

Another added: “Yeah, they were wrong for each other from the start.”

While a third stated: “Why the f**k is he not giving her her phone. It’s her property.”

Hulu subscribers have watched Scott complain week after week that he feels left out of his former family’s show The Kardashians.

Previously, he snarked at Kris Jenner: ” You don’t invite me to half the s**t you do anymore.”

The rage boiled over onto Kendall when, in episode five’s final scene, Scott was enraged after he wasn’t invited to her birthday party.

“Kourtney, at the end of the day, is my sister,” Kendall defended. “This dinner was literally 15 people…”

Scott, 12 years her senior, lashed back: “I’ve not heard you say sorry.”

“You won’t let me speak, Scott. You’re talking over me,” the seemingly helpless Kendall said.

The model grabbed her food and stormed off saying: “I’m out, this is so f***ing ridiculous”.

While attempting to repair his brother-like relationship with Kendall, Scott threw shade at the entire Kardashian family.

In the following episode of the Kardashians, Kendall invited Scott over to hash out their issues after they had not spoken since their big fight.

The two sit down and Kendall openly admits: “I know I haven’t spoken to you since everything went down but I obviously feel like it’s worth a conversation.”

Kendall then tells Scott that the previous conversation could have been handled better stating: “You immediately attacked me.. .and immediately I shut off, immediately I’m trying to defend myself.”

Scott, still not seeing his error in full, agrees saying: “Neither of us got any point across.”

In a confessional, he shares: “It felt horrible that [Kendall and I] came to a place where we couldn’t even speak normally to each other… and it brought anger on.”

Kendall then has a confessional of her own in which she addresses the struggle any family goes through when confronting change.

“The beginning of any sort of change in a family is just difficult, awkward time,” she says.

With things squared Scott lets it be known what he thinks of Kendall compared to the rest of her family: “I’m telling you, you’re the most normal person in the family… everybody’s dealing with something”.

Kendall doesn’t deny it and responds: “I try to stay out of everything. I’m just like, living.”

machinegunkelly/instagramKourtney and Travis Barker were married this past Sunday in Portofino, Italy[/caption]