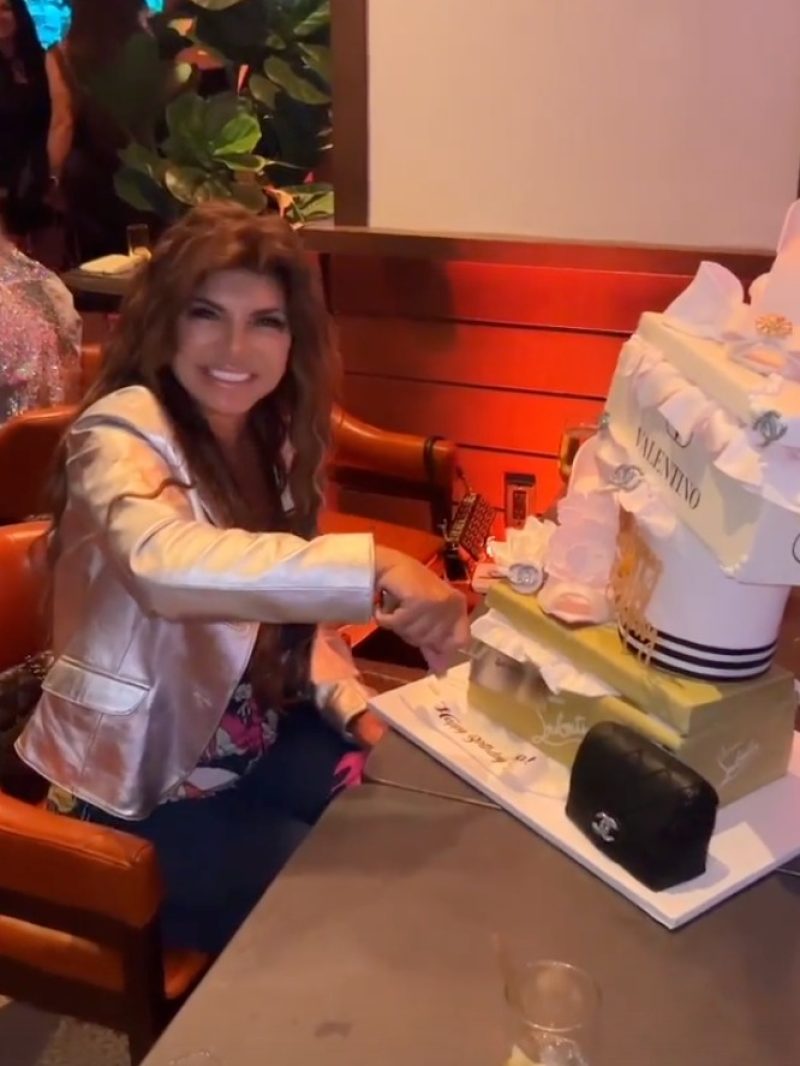 TERESA Guidice has kicked back at her THIRD 50th birthday party.

Here’s a look inside the latest lavish bash with massive cakes shaped like Louboutin shoes and Chanel bags.

Instagram/@jenniferaydinReal Housewives of New Jersey fans fumed on Instagram, ‘stop with all these birthdays’[/caption]

Teresa is not done celebrating the big 5-0.

On Thusday night, her pal and Real Housewives of New Jersey co-star Jennifer Ayden shared snaps from inside a restaurant.

In one Instagram Story, Teresa cut into a simply humungous cake.

The dessert was stacked with fondant-fashioned designer items, including a Valentino shoe box, a black Chanel clutch – a Louboutin heel and another heel as the proverbial cherry on top.

As Teresa – in a navy blue top with her hair down – struggled to even cut into the toppling cake of edible shoes, some fans felt a little birthday burnout.

Jennifer shared another group photo to her Instagram page, all smiles with a gang of five she wrote, “Still celebrating @teresagiudice.”

One fan commented, “For God sake stop with all these birthdays… enough!!! All this year we will see b-day party after b-day party? Really??? We are sick and tired of it.”

Teresa and her fiance, Luis Ruelas, flew to Mexico last weekend for her birthday getaway – one of her two previous parties.

To celebrate her milestone, which was actually on May 18, the reality star had balloons sent to her hotel room, hung out with friends in Mexico, and showed off her beach body.

Her fiance arranged for a private jet to take them to and from and she posted photos of her kissing him – champagne, crown-shaped balloons and all – along with having a private rooftop dinner.

One of the balloons on the jet front read, “Happy Birthday Teresa!” while another stated, “HBD Queen.”

Inside the jet, the couple appeared to be eating from the large fruit and cheese salads.

They were all drinking from glasses of champagne as the Bravo star wrote, “Cheers!” on her Instagram story.

“To be 50 and full of Bliss. Best Birthday ever thank you,” Teresa captioned one photo with her balloons and thanked her fiance.

For her actual birthday, Teresa threw a party at her mansion in the Garden State.

The birthday dinner was held in her new kitchen, which was decorated with several flower bouquets as centerpieces, candles, and flower petals.

There were numerous bottles of Danos Tequila and martini glasses for the party guests to enjoy- and a three-tiered cake once more.

The TV personality recently moved into her Montville mega-mansion with Luis.

They purchased the home in February 2021, about a few months into their relationship – and fully redid it.

The 7,728 square-foot residence includes NINE bedrooms, seven full bathrooms, three half-baths, and a long list of amenities on an almost six-acre piece of land – including a meditation patio and heated six-car garage,

Despite spending a barrel of money on her birthday trip – and house -the couple still has a wedding to plan and pay for.

Recently, Teresa spoke to Page Six about her upcoming nuptials.

“Wedding plans are going amazing. Luis is involved with me, and I love that. We’re doing it together, so it’s not just me,” she said.

The RHONJ star said that this wedding will be different than her first in the sense that her fiance is involved in planning this time.

However, no wedding date has been announced.

Teresa finalized her divorce from ex-husband Joe Giudice last year, and soon after Luis, 47, proposed in October 2021 after a year of dating.

Louie has two sons; David, who just started college last year, and a younger son Louie who’s moving in too.

Luis proposed with fireworks and a violinist.

InstagramTeresa Giudice has had three birthday parties since her May 18th birthday, including one at her $3.4M mansion and another in Tulum[/caption]

Tik Tok / ashramchicShe and fiance Luis Ruelas, Jennifer and others drank champaign on a jet to get there last weekend[/caption]

InstagramAfter her third lavish bash on May 26th, some fans felt it was enough birthday boasting[/caption]