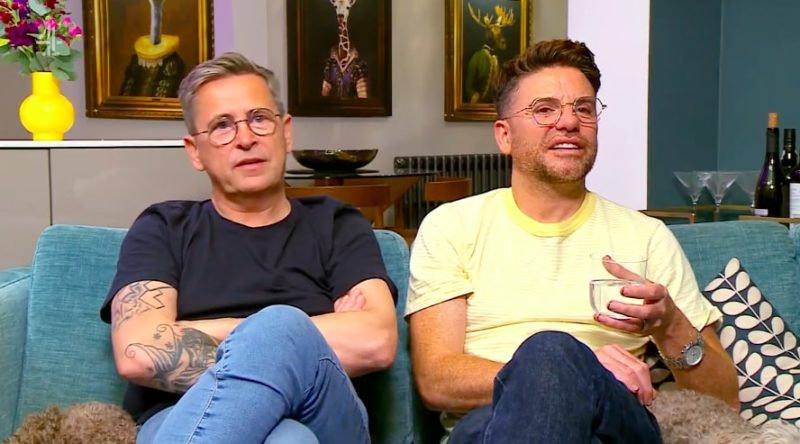 The hairdresser, 50, was excited to show off all his hard work to husband Daniel Lustig.

After 12 weeks of watching what he’s been eating, Stephen decided to see if his efforts had paid off.

The reality star raided his wardrobe and put on an old shirt.

While Daniel sat in front of the TV, waiting for his other half to join him, Stephen said from another room: “Dan, you know I’ve been eating healthy now for three months…

“You know I tried my shirt on and I couldn’t fit into it?”

As he walked into the front room, Stephen said: “Well… three months later… look at this!”

Daniel was left lost for words at his weight loss and said: “Shut the door!”

Stephen replied: “I’m back in it!”

Many fans rushed to Twitter to congratulate the star.

One wrote: “OMG well done Stephen! I remember him trying on that shirt and he was struggling. He looks great! #Gogglebox.”

Another said: “So Daniel has only just noticed that Stephen has lost weight but lives with him! I love these two #Gogglebox.”

It comes after the pair looked completely different as they attended the annual garden party for the veterans charity The Not Forgotten earlier this month.

Taking to Instagram, they shared a video of themselves leaving their house to attend the big party at Buckingham Palace.

Wearing a light blue jacket and white shirt underneath, Stephen told their 216k fans: “So we are off to Buckingham Palace. I’m pleased to say we’re both back in our wedding suits!

“Albeit mine is a little on the snug side!”

The pair have been on Gogglebox since 2019.

They tied the knot at the picturesque Chateau de Lisse in Lot-et-Garonne, France.

However Daniel hasn’t always been on the show.

The hairdresser joined the Channel 4 programme for the 13th series in 2019.

Instagram/@stephengwebb1971The pair got married in 2018[/caption]