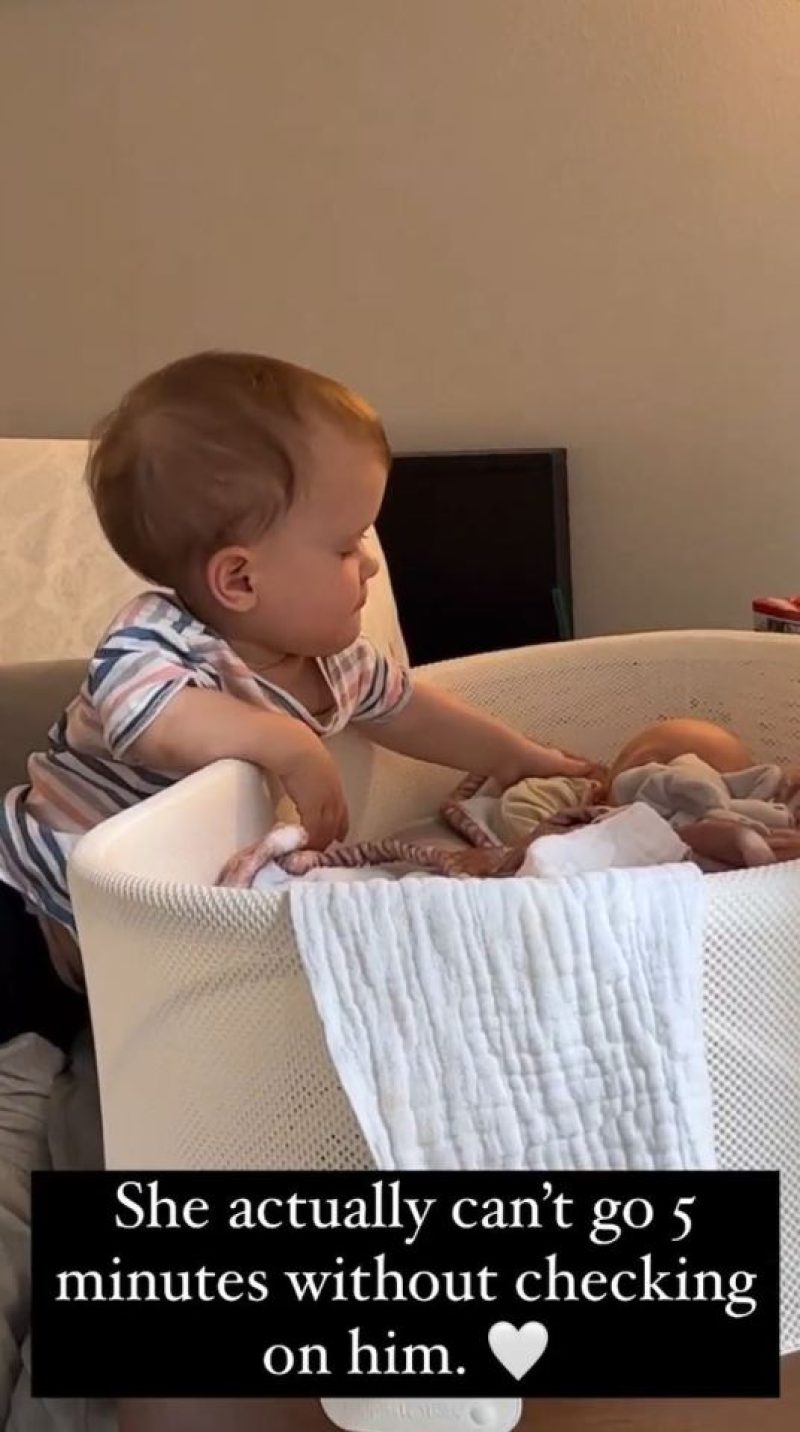 TORI Roloff has shared a sweet video of her two-year-old daughter Lilah checking on her napping newborn brother Josiah.

The Little People Big World star welcomed her third child on April 30th and has been posting adorable photos and videos ever since.

Now Tori, 31, has taken to her Instagram Stories to share an endearing video of her daughter Lilah checking in on the new addition.

In the sweet clip, the toddler stood perched on her parent’s bed as she reached into Josiah’s bassinet where he lay sleeping.

The little girl gently touched her infant brother’s hand as he squirmed in his baby bed filled with comfy blankets.

Lilah looked intrigued as she comforted the tiny tot in the heartwarming clip.

Tori captioned her post: “She actually can’t go 5 minutes without checking on him,” with a white heart emoji.

Just days prior, the TV star shared another adorable video of her daughter kissing her new baby brother.

She asked Lilah, who had pink glasses on: “Is that your brother?”


US has wreckage from UFOs – the truth could change the world, says Congressman

The little girl then held hands with her baby brother and poked at his ear and nose with her finger.

Tori asked her: “Do you love your baby brother?”

The little one then leaned over and planted a sweet kiss on Josiah’s lips.

In a final Story, the reality star shared a snapshot of her third child as he cuddled with his stuffed white bunny.

She captioned the post: “Something happened tonight, and he changed! He totally woke up!”

Tori concluded: “Time slow down!” along with a slew of crying emojis.

Earlier this week, the mother of three continued her cute content streak and shared an adorable new photo of Josiah with a big smile on his face.

The reality star once again took to her Instagram Stories to post the sweet picture which featured her smiling newborn with his eyes shut while looking cozy under his blanket.

“Happy Monday,” the LPBW star wrote over the pic.

The star has been open about her childbirth journey and what followed as she recently got real with her fans in her postpartum.

She shared: “You see the best moments on Instagram.

“The recovery was so intense in the beginning. The hospital was an actual nightmare (not because of the hospital but just events that transpired) and I’m so thankful for all the help we got.”

She continued: “Everyone kept telling me after the fact how hard c section #3 is… they’re right. I don’t remember pain like that!”

Tori was in such discomfort she considered all of her options.

The young mom said: “My pain was so bad the first night home we almost called 911. Luckily I was able to get on track with medication after that.

“Thankfully Josiah is the actual easiest baby. He’s been so chill and calm through everything we’ve gone through in the last week.”

Tori and Zach celebrated Josiah’s birth by sharing: “You surprised us all by coming early, but also the wait felt like a lifetime!”

“Best birthday present ever!” she added, referring to the fact that she celebrated her 31st just a few days after.

Zach also shared his glee, writing: “He came about two weeks early but we were ready! Super happy for our family and the kids adore him already.

“Very proud of Tori as well, she has done incredible!”