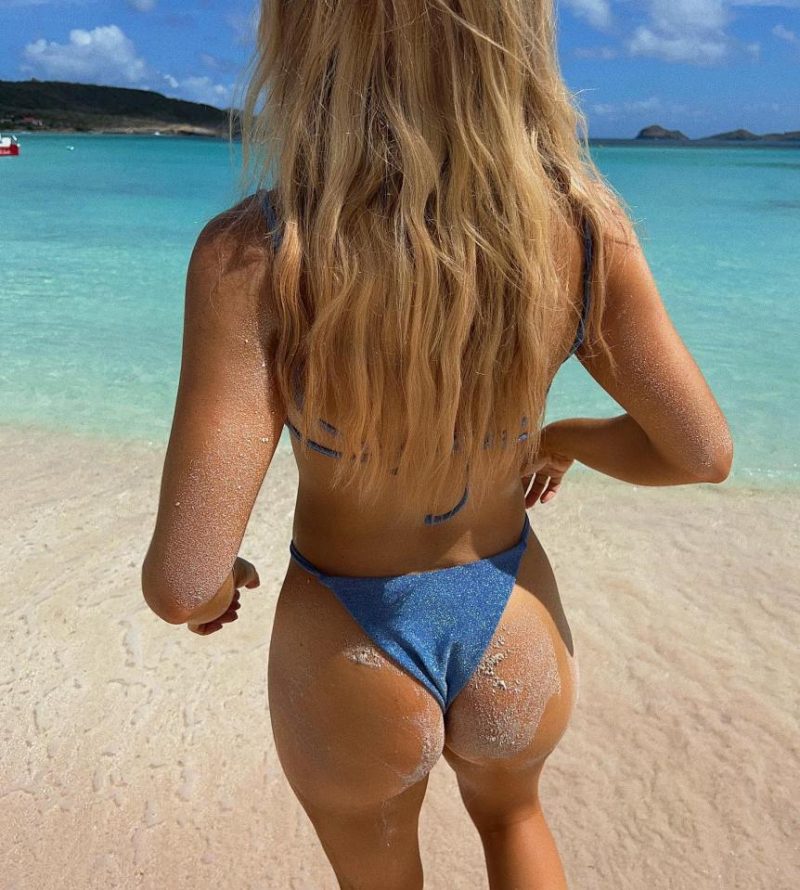 KYLIE Jenner’s assistant, Maguire Amundsen, has flaunted her curvy figure in a blue thong bikini during a beach getaway.

The blonde-haired beauty shared the snaps on her Instagram page.

She began working for Kylie in 2019Getty

Maguire captured her gorgeous physique from behind in one picture while donning the skimpy two-piece suit.

Kylie’s right-handed woman was covered in sand as she dipped her toes in the water.

A second snapshot gave a full view of the celebrity assistant with a picturesque background of the Caribbean ocean and clear blue sky.

She wore her long blonde hair down and a pair of rounded sunglasses for the outing.

She fittingly captioned the post: “you can call me sandy.”

Maguire has repeatedly been sharing photos from her Caribbean vacation showing off her bikini body and more.

She recently posed in another tiny number in an Instagram Story.

The swimsuit barely covered her breasts and butt as she strutted her stuff.

She accessorized with pink boots and a cowgirl hat while a Dylan Scott song played in the background.

She then changed into a pink frilly skirt, sharing that on her Instagram Story as well.

Maguire continued showing off her trip, posting photos of a luxurious lunch she enjoyed and a beach party.

She showed off her figure on the beach in a blue top and skirt combo that hugged her curves.

She appeared to be enjoying a fire with friends.

She may keep a lower profile than Kylie, but she still gets plenty of attention.

Earlier this month, Maguire shared a snap from the gym.

She showed off her abs in the picture as she posed in front of a mirror.

The assistant donned a black sports bra along with matching leggings.

She also had on white ear pads during her exercise routine.

Her bare skin glistened with sweat as she flaunted her toned stomach.

Maguire stepped forward and then backward in the following story before turning to the side.

She managed to pull up the top part of her leggings while filming herself.

In April, Maguire jetted off with the Keeping Up With The Kardashians alum and her 4-year-old daughter, Stormi, to Disneyland.

According to her Linkedin profile, Maguire became the executive assistant to Kylie and her children back in March 2019.

From Oklahoma City, she attended Vanderbilt University, where she obtained a degree in Human and Organizational Development.