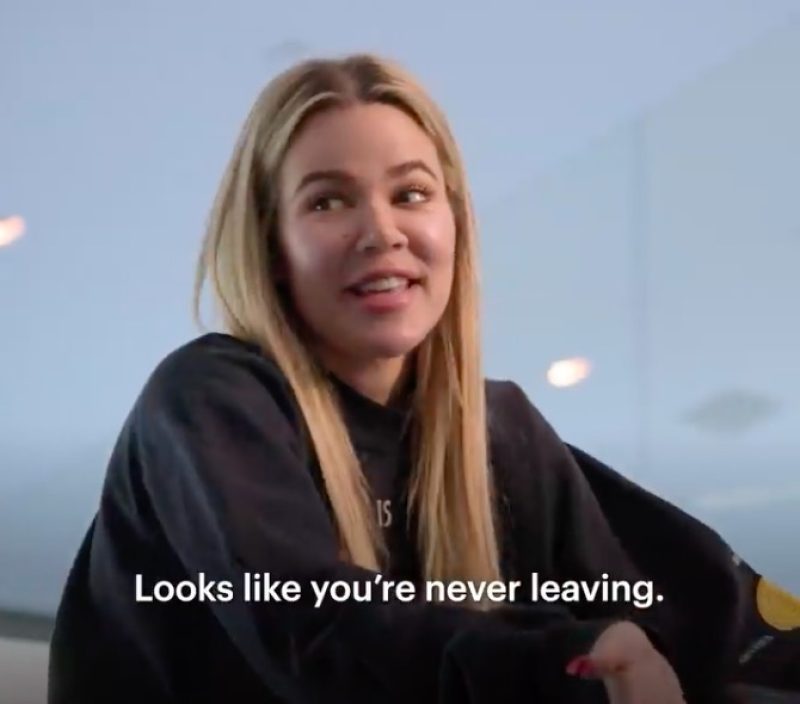 KHLOE Kardashian smiles and gushes over her love for Tristan Thompson in the latest episode of the Kardashians, not knowing his secret love child with another woman is about to be revealed.

And looking back at the scene, which was most likely filmed around November last year, has left fans cringing with embarrassment for the reality star.

HuluKhloe praises Tristan, unaware of the news he is about to break to her[/caption]

As seen on TV, Khloe and Tristan appear to be working out together at a gym, when the 37-year-old teases her then boyfriend about the uncanny fact her sister’s exes all seem to keep hanging around, even after their big breakups.

The NBA baller shot a look back at her, before creepily adding: “More like you’re never leaving me.”

Of course, that’s exactly what would happen just weeks later, after Tristan admitted to cheating on Khloe – fathering a child with a personal trainer.

WORKING UP A SWEAT

Inside the Kardashians’ lavish home gyms with Pilates rooms & more

Knowing that now, fans on Reddit slammed the all-star for his actions.

“Tristan saying ‘you’re never leaving me’ made me feel SO UNCOMFORTABLE,” one follower said, as another added: “The audacity of Tristan knows no bounds.”

A third added: “Honestly, I just want Khloe to move on from this loser and be happy with herself. Tristan keeps playing her for a fool in front of the whole world, she needs to just cut him off and live life with her daughter and hopefully she’ll meet someone better.”

While one fan called it all depressing: “I don’t even know the woman and I’m starting to get legitimately depressed watching this relationship play out.”

The sentiment echoes a previous episode, filmed last October in the days just before and after rocker Travis Barker proposed to Kourtney Kardashian.

At the time, Kourtney’s loved ones were all gathering in Santa Barbara to surprise her – including Khloe and Tristan, who had recently rekindled their flame after he was caught with model and influencer Sydney Chase last April.

But as of October, Khloe and Tristan were an item once more, and preparing for a magical weekend.

“We’re good, we’re in a really good place,” Khloe reflected at the time in the show’s confessional. “We got back together. He’s been going to therapy a lot. There’s just been a lot of effort on his part.”

Khloe confessed life was simply more “fun” with Tristan nearby.

“When we broke up, I learned how well him and I got along and what great friends we are and what great partners we are,” she sang. “I have a lot of hope and faith and optimism for our future together.”

But of course, that future was shattered just a few weeks later, when Tristan admitted to fathering a baby with personal trainer Maralee Nichols.

Kardashian viewers shared their sympathy, and their pity, after watching Khloe glow over who-she-thought was a reformed Tristan.

“Tristan Thompson has baby #3 on the way with another woman, while Khloe Kardashian acts delusional again.,” one user tweeted.

“Ooph this scene of Khloe talking about taking Tristan back and all of the effort he’s putting in. I don’t understand how he’s doing all this with a straight face. That man is something else,” a third viewer tweeted.

Someone else chimed in: “Tristan literally ruins #TheKardashians.”

Khloe herself tweeted of Tristan’s appearance on the episode: “Well we know how this aged.”

HuluTristan played a dangerous game with Khloe and daughter True[/caption]