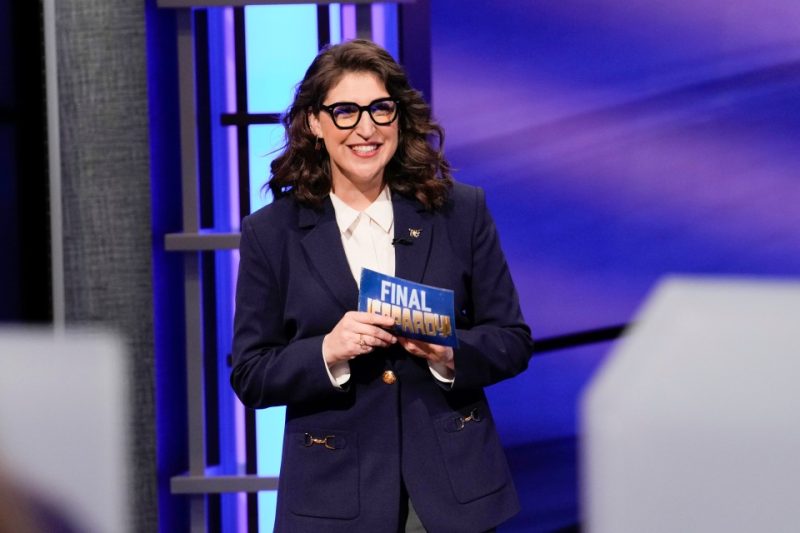 GAMESHOW fans are buzzing over the return of Celebrity Jeopardy!.

Here are the WILD contestants that fans are suspecting will appear with rumored host Mayim Bialik.

GettyMayim Bialik is expected to host the spinoff Celebrity Jeopardy! in the fall[/caption]

For the first time in seven years, Celebrity Jeopardy! will be hitting the famed blue-purple stage.

In their reveal, network ABC stated: “A host will be announced at a later date,” however, interestingly enough, Variety shared that current Jeopardy! host Mayim, 46, is indeed set to host it.

Fans have been wondering who between her and Ken Jennings, 47 will get the respected regular Jeopardy! hosting slot at the end of Season 38 in July.

But in the meantime, fans are also going wild over the Celebrity Jeopardy! announcement and have some unruly theories about it.

KEN IT BE TRUE?

Jeopardy! fans think Ken will be named host amid MAJOR decision about Mayim

Celebrity Jeopardy! first aired in 1992, and the last tournament took place in 2015 – it’s set to air on five consecutive Sundays in the fall.

2015’s tournament was won by football player Aaron Rodgers (who also took a turn at guest-hosting the show in 2020) and the special has only ever been hosted by the late Alex Trebek.

Considering that batch – a brew of brains and star power – fans on Reddit had theories about who this one could involve, and they truly run the board.

One Redditor commented: “a comedian and licensed doctor, I think Ken Jeong would be both entertaining and good at the game.”

The Hangover actor and Masked Singer judge is a licensed physician who worked in internal medicine, per NPR.

“I think he’s at a good intersection of entertaining and intelligent for celebrity jeopardy,” supported another.

But soon more shocking names were dropped with dozens agreeing on top picks.

“My vote is for Kenan Thompson,” who has hosted Jeopardy! parodies – a show staple – on Saturday Night Live – “Yes please,” a second agreed while a third wrote “great idea!”

Another commented: “I don’t have any names in mind, but I really want some celebrities whom our expectations are low/non-existent to blow their competitors away to the scale of a Andy Richter/Wolf Blitzer type match.”

The funnyman infamously trounced the CNN figure in a Celebrity Jeopardy! match years back by nearly $40K.

Two Redditors had a singer “pop” into their heads, as one wrote: Kesha is actually very smart.

The songstress scored 1500 on her SATs before pursuing music, per Prep Expert.

Another wrote: “Big second to the Ke$ha nomination.”

Someone else jumped in: “Daniel Radcliffe would probably have some fun on Celebrity Jeopardy!, and I feel like he might be game to do it.”

And as a final user bashed: “My dream is that Ken Jennings is the host.”

Mayim’s other show, Fox’s Call Me Kat, was just renewed for a Season 3 – supporters of Ken, which there are many, rushed to Reddit over that announcement last week as she stars as the titular Kat in the multi-camera sitcom.

Some felt this was “the deciding factor,” claiming Mayim will be “too busy” to do regular Jeopardy! – in fact, hundreds commented in agreement.

As one ripped: “Another good sign pointing towards Ken hosting the syndicated show full-time.”

At least three games had Double Jeopardy clues left on the board as time ran out.

A fan wrote on Twitter Friday: “I like Mayim Bialik but she’s gotta pick up the pace on Jeopardy. That’s multiple shows now where they’ve run out of time with clues left on the board.”

During Canadian tutor and fan-favorite Mattea Roach’s recent 23-game tear, nearly all under Ken, games rarely – if ever – had clues left, and even she stated after her run she prefers Ken.

“As a contestant, there is something really special about being onstage with the greatest player of all time,” she told Vulture.

Ken and the Big Bang Theory alum started filling in for the legendary host in 2021.

After his tragic passing, however, there was a fleet of Season 37 celebrity guest hosts, including footballer Aaron.

It then surprisingly was narrowed down to Mayim and Mike Richards – but the executive producer resigned due to past misogynistic comments, and fan-favorite Ken entered the running.

Unlike Ken, however, Mayim hasn’t had the advantage of hosting when a recent contestant went on a Tournament of Champions-resulting tear – which always leads to higher ratings and more ‘buzz’.

The official contestants for Celebrity Jeopardy nor the host of November’s upcoming Tournament of Champions have been announced – a lot is suddenly on the line for the decades-long game show.

TwitterFans dished out their picks for the upcoming special tournament, and couldn’t forget when Wolf Blitzer was ‘curb stomped’ by Andy Richter[/caption]