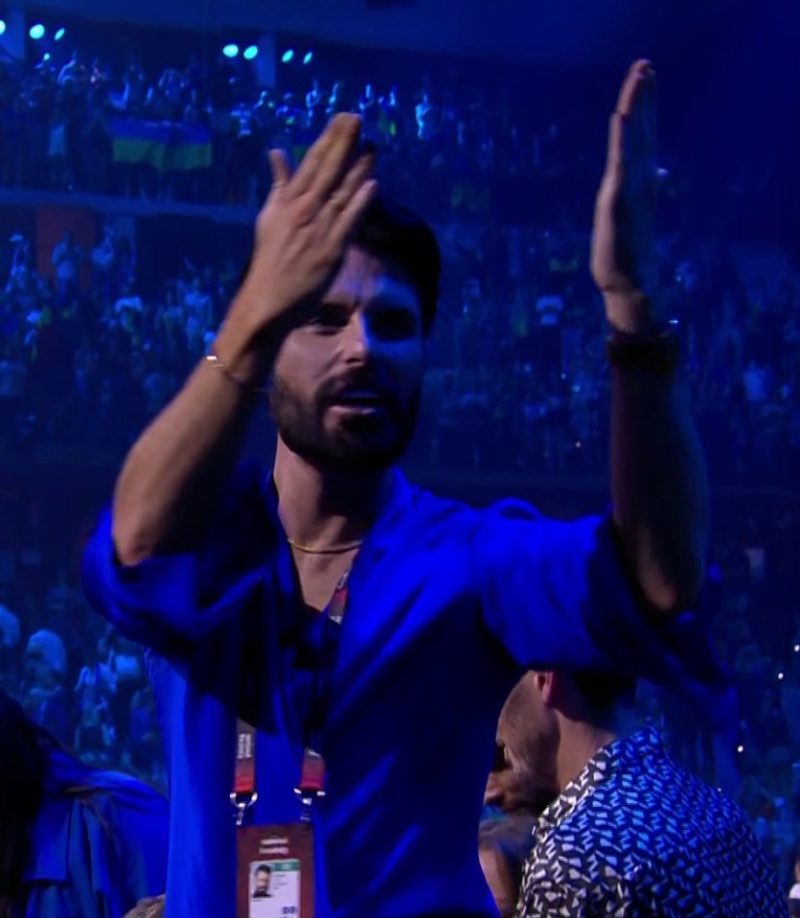 EUROVISION superfan Rylan Clark ended up being broadcast around the world last night – as he leapt out of his seat.

However, Graham Norton quickly pointed out he was in part of the arena he shouldn’t have been allowed into.

The 33-year-old telly favourite was overcome with emotion after the UK narrowly missed out on its first victory in 25 years.

Public votes for Ukraine propelled the country’s act into first place at the final moment.

Rylan was seen on this feet after the Italian host spoke about the important of embracing peace.

He was seen applauding both the victorious Kalush Orchestra and the UK’s act Sam Ryder, cheering and with both arms raised in the air.

The TV favourite was later seen clamping both palms to his face and blowing kisses to someone off camera.

BBC commentator Graham, 59, sounded surprised to see his co-star on the broadcast, which is aired to more than 150million viewers around the world.

He said: “Oh, there’s Rylan. He’s got in on the act. His accreditation shouldn’t get him into the green room but he made it.”

Rylan and co-host Scott Mills were later seen celebrating with Sam, 32, who rose to fame through TikTok during lockdown.

Despite the disappointment at narrowly losing out on a historic Eurovision win, Graham saw the funny side.

He joked: “There are probably some relieved people at the BBC. It looked a bit dodgy there for a minute. We’re going to have to host?

“But no, we got the ideal result really. All the glory with none of the expense.”

The folk-rap group Kalush Orchestra earlier performed Stefania – an anthem for the nation after its invasion by Russia.

Receiving the Eurovision trophy, singer Oleg Psyuk said: “Thank you for supporting Ukraine. This victory is for every Ukrainian. Slava Ukraini.”

“Next year Ukraine will host the Eurovision song contest. I thank the Kalush Orchestra for this victory and everyone who gave us your votes!

“I am sure that the sound of victory in the battle with the enemy is not far off.”