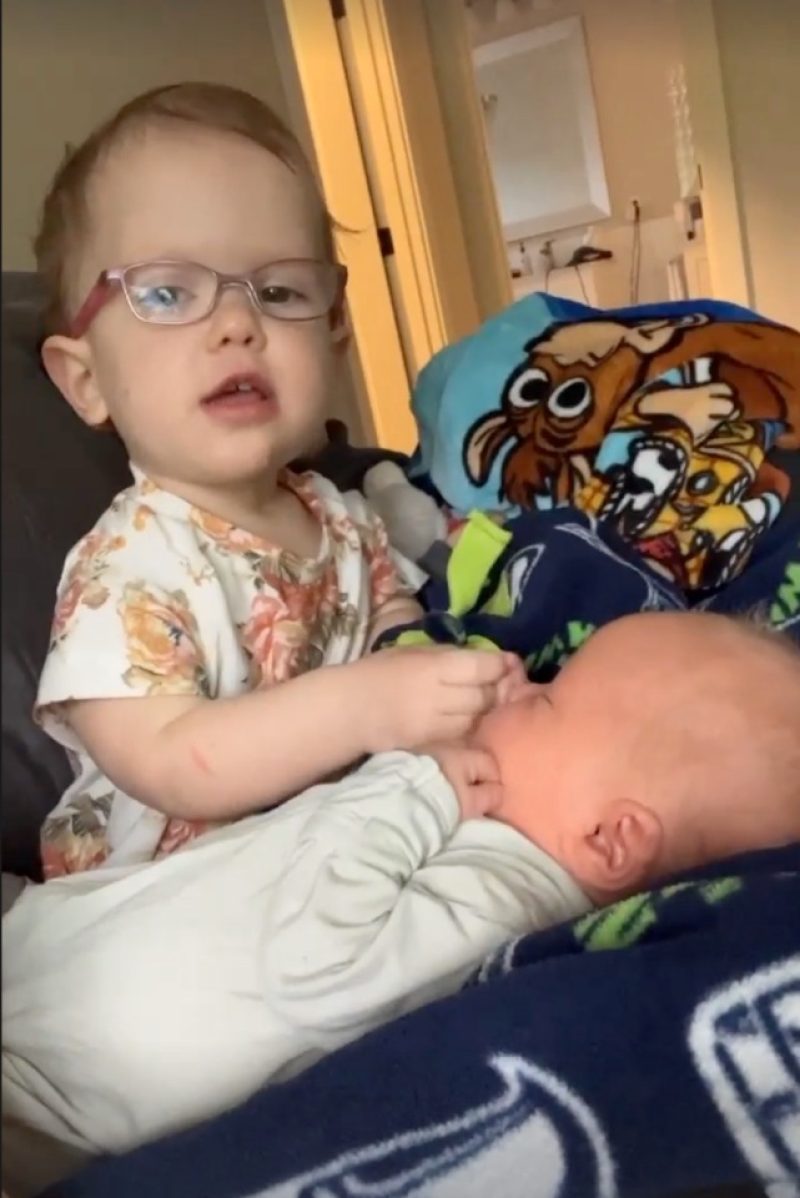 Tori, 31, posted a series of Instagram Stories of her little ones spending time together.

The LPBW star asked Lilah, who had pink glasses on: “Is that your brother?”

The little girl then held hands with her baby brother.

Lilah then poked at his ear and nose with her finger.

Tori asked her: “Do you love your baby brother?”

The 2-year-old then leaned over and planted a sweet kiss on Josiah’s lips.

In the final Story, the reality star shared a snapshot of her third child as he cuddled with his stuffed white bunny.

She captioned the post: “Something happened tonight, and he changed! He totally woke up!”

Tori concluded: “Time slow down!” along with a slew of crying emojis.

The TV star welcomed her newborn boy, Josiah, at the beginning of May.

In addition to Lilah and Josiah, Tori and her husband Zach, 31, share their son Jackson, four.

Recently, Zach’s father, Matt Roloff, 60, revealed on Instagram that he is offering the family’s Oregon pumpkin farm up for sale.

According to the Wall Street Journal, the Roloff patriarch has asked for $4 million with the sale of the “original family home and bright red barn,” where he and his ex-wife Amy, 57, raised their children.

Fans jumped at the comments section and slammed the star for not selling the property to his offspring.

One brought up Matt’s kids and asked: “None of the kids wanted to buy it?”

Matt responded: “They all had more than enough… and very fair chances.”

The reality show will follow Zach and Tori’s growing family, along with Amy and her new husband Chris Marek, 59.

Amy posted a sweet tribute on Instagram as both sons Jeremy and Zach turned 32.

In the first snapshot, Jeremy and his wife Audrey, 30, appeared to be on vacation in Hawaii.

The couple is the parents of three children: daughter Ember, three, son Bode, one, and their newborn baby Radley.

In the second snapshot, Zach had taken a group photo with Jackson and Lilah.

Tori, however, appeared to be missing from the image.

In the recent trailer, the tension between Zach and Matt exploded in an argument over who would take over the farm.

INSTAGRAM/toriroloffTori and her husband, Zach Roloff, are now parents of three[/caption]