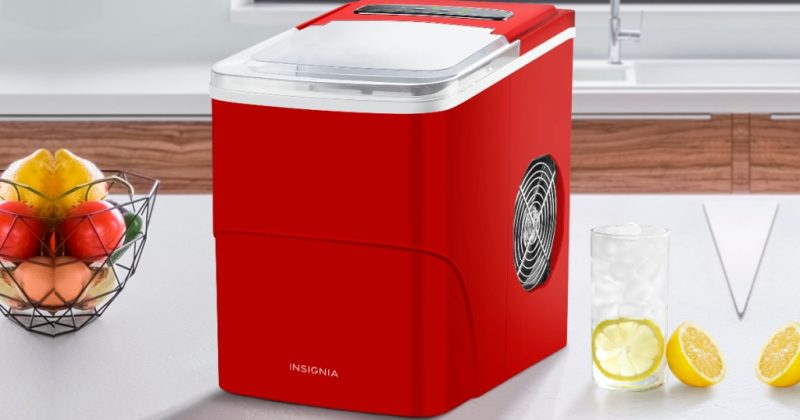 Today, May 15th only, head on over to BestBuy.com where you can score this Insignia 26 Lb. Retro Portable Icemaker with Auto Shut-Off for just $89.99 shipped (regularly $125.99)!

Planning summer parties? This portable ice maker is a must-have item and it’s a great time to grab one with the price so low! Producing up to 26 lbs of ice a day, this ice maker makes fresh ice every 6-13 minutes and as an added bonus, you can choose from two cube sizes to get just the right size for your drink!

The easy-to-operate control panel makes this ice maker a cinch to use. Cool drinks on hot summer days will keep your guests happy and refreshed! This would be a great addition to your RV or camper for your upcoming camping trips!

Check out this helpful review…

My refrigerator ice maker died a few times and we gave up trying to fix it. I have been without an ice maker for over a year. Making ice cubes in trays really puts the kibosh on wanting to use ice. For Mother’s Day, I decided that I wanted an ice maker. This is the one I decided on. So far it has been great. I put three cups of water in, and it makes nine ice cubes at a time. It probably takes about two hours to use up most of the water. Towards the end, when the water is almost gone, the ice cubes start to look the size of sliced olives. If you don’t take the ice out as it makes it, it could start melting as there’s no way for the machine to freeze it in there. Also if you don’t take the ice out, it could stop making ice because there’s a point where it stops making ice if it is too full.

When the machine is finished with a batch of cubes, I use the little scoop that came with the machine to put them into a silicone measuring cup I already had. Then I dump the ice into the place in my freezer where they are supposed to have been made by my freezer ice maker. Sigh. I can use the ice dispenser in my refrigerator this way. That’s why I use three cups of water. For our average use for three of us who actually use the ice, that’s enough for a few days. I learned that you don’t want to make too much because the ice freezes together and it doesn’t break up that easily.

Once it has made all the cubes it can with the water I supplied, I turn it off and wait a bit until whatever ice it’s trying to make melts again. Then I unplug it and take it to the sink to drain it. There’s a little drain plug on the bottom right corner for easy draining. This machine is making me happy because I can have cold beverages again!

Shop around and save on more things for your home!