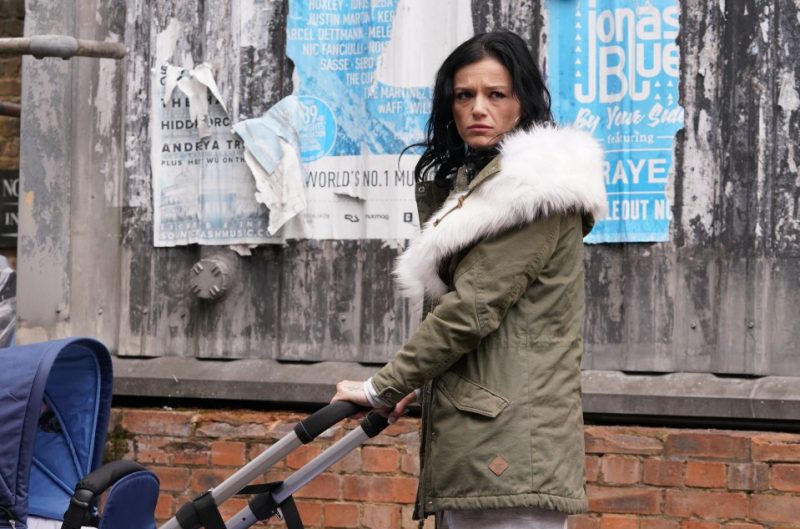 A MUM who was racially abused by EastEnders star Katie Jarvis says she’s been left “traumatised” and unable to return to work.

Michelle Antonio has told of the debilitating panic attacks she now suffers in her first interview since Jarvis’ race rant outside a bar in Southend, Essex.

She was captured on video screaming slurs

Michelle had been enjoying a day at the seaside with her daughters, then aged seven, 18 and 25, when Jarvis launched into a foul-mouthed tirade outside a fish and chip shop.

Tempers flared over a chair, which was being used by Michelle and her family.

The performer, who played Hayley Slater, exploded in fury, calling Michelle a “black c***” and bragging: “I’m a celebrity.”

“How can racism like this still be going on in the 2020s? You think things have changed, but nothing has,” Michelle, 49, told the Sunday Mirror.

“Katie shouted, ‘black lives don’t matter, I’m a celebrity’ – on and on and on.

“I was so shaken up and angry, frustrated, upset, embarrassed.

“She was very animated and angry. She was shouting and phlegm was flying everywhere.”

Single mum Michelle said she was forced to stop working after becoming “isolated and withdrawn” and suffering panic attacks.

“I felt mentally unstable,” she said.

“As the court case came up, I was getting panic attacks, feeling stressed, thinking, ‘oh my God, I wish that we didn’t have to go through this’.

“I had to leave my work as a college student engagement officer, which I loved.”

Jarvis admitted one count of racially aggravated harassment against Michelle, and one count of common assault against a bouncer she spat at two hours later.

Michelle, a mum-of-three from White City in London, told the paper: “I’ve been sitting here stressing myself out for two years.

She called the sentence “a slap on the wrist”.

Katie has never apologised… she should never work again

Jarvis lost her job at the soap and worked as a guard at a branch of budget store B&M following her vile outburst.

“Katie Jarvis claims she isn’t racist but when people are drunk, the truth comes out, and those words came out of her mouth,” said Michelle.

“She made a public apology but not a personal one to me and I was the one that was being abused.

“She should never work again.

“If she’s lost money, that’s because of her behaviour.”

A spokesperson from Essex Police said: “Investigations can be lengthy as officers review evidence, take statements and study available CCTV, but we were in contact with Ms Antonio throughout.”

ISO ImagesAfter being ditched from the soap, Jarvis took on a new job as a B&M security guard[/caption]