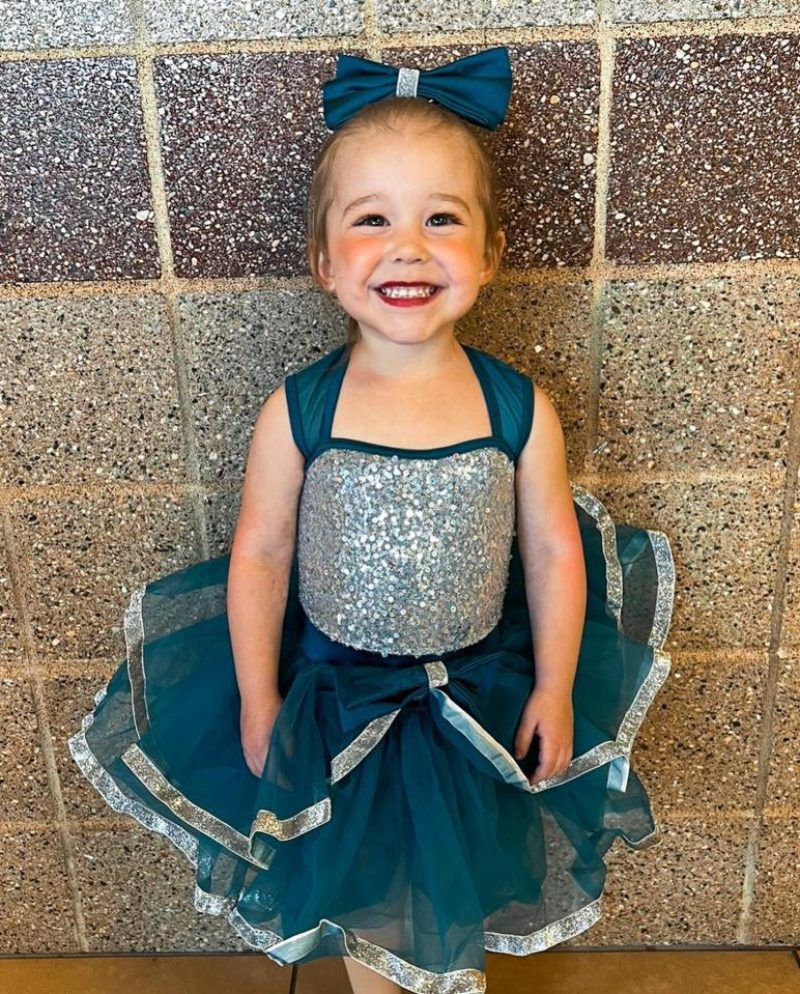 Some are even calling them twins.

Chelsea shared a photo of her middle daughter, Layne, at her first dance recital.

In the photo, she is wearing a turquoise tutu with silver sparkles, and a matching bow.

Layne wore sneakers after her show instead of dance shoes and donned a smile on her face.

The first photo showed the 3-year-old sitting on a brick wall holding flowers.

In the second photo, she is standing up this time against the brick wall but is still beaming.

In a picture shared on her Instagram story, the Teen Mom star is holding Layne in her dance costume and looking at her smiling while her daughter looks at the camera.

Fans commented on how cute she was in the photo and how happy she looked, but most of the comments focused on how much she looked like her older sister.

Although they have a nine-year age difference, Layne and Aubree look almost like twins.

“Mini of your oldest daughter she is so beautiful,” one fan commented, adding heart-eye emojis.

Another agreed, “Just a mini Aubree.”

“Omg I thought this was an old picture of Aubree at first,” commented a fourth.

While many of the commenters agreed, some of them even said that Layne looked like Chelsea’s twin or looked like her when she was younger.

Earlier this month, Chelsea shared a throwback picture of her and her mom, Mary, for Mother’s Day.

The photo was taken many years ago, while the 30-year-old was still a child.

Chelsea included a sticker that read: “Happy Mother’s Day!” and tagged her mom in the post.

The Instagram Story was shared on Reddit, where fans compared the former MTV star to her children – specifically her daughters.

“I see so much Layne in that childhood photo of Chelsea,” said one user.

“Aubree looks so much like her!! Omg,” wrote another.

“I thought that was a young Aubree for a second,” said a third.

Back in April 2021, Chelsea shared another throwback photo and fans thought she looked identical to Layne.

The reality star loved the childhood snapshot and saw so much of her daughter in the picture, so she shared it on her own Instagram for all of her followers to see.

“It’s the bangs for meeee,” Chelsea wrote in her Instagram Story with a throwback photo from when she was a kid with a semi-bowl cut hairstyle.

Almost everyone voted yes on the interactive poll, letting Chelsea know that she and her 2-year-old look a lot alike.

Along with Layne, Chelsea shares two other children with her husband, Cole DeBoer– Watson, 5, and Walker, 1.

She had Aubree with her ex, Adam Lind.