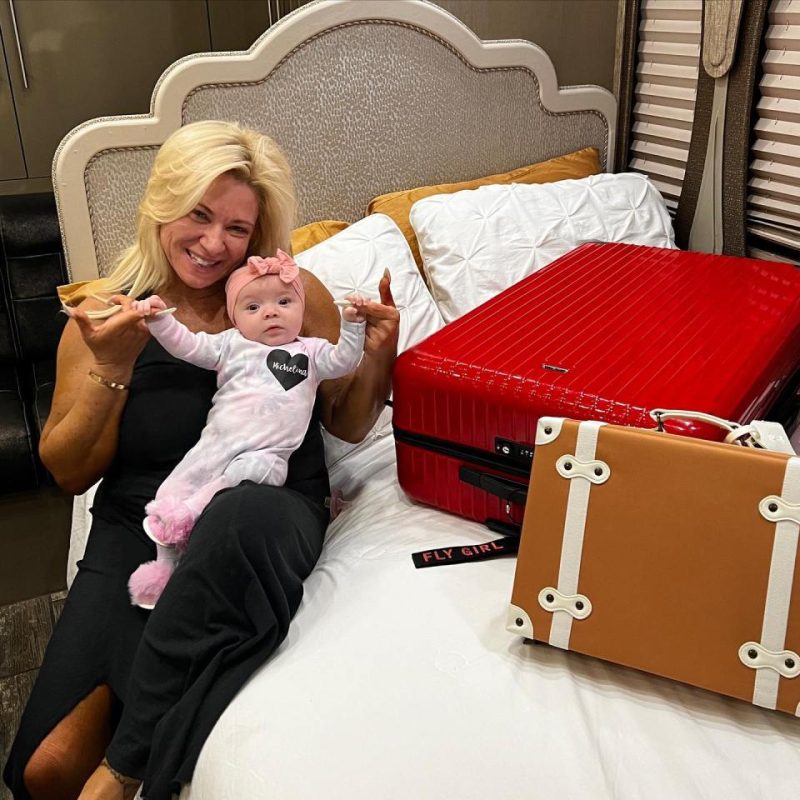 LONG Island Medium Theresa Caputo has shocked fans by showing off a new hairstyle and going without make-up in an Instagram photo.

Theresa posed with her granddaughter in the photo.

She sat on the bed in a new photo holding her granddaughter, Michaelina Rose, while packing for her tour.

“Tried to pack something a little extra but Victoria caught me,” the Long Island Medium star captioned the photo.

Theresa added a cringe emoji and a heart emoji and used the hashtag #grandmasgirl.

In the photo, she wore an all-black outfit with a gold bracelet and her signature long nails.

Michaelina wore an adorable onesie with her name in a heart on it and pink fuzzy shoes.

Theresa had a huge smile on her face and sat on a clean, white bed next to two suitcases- one red and one brown.

The medium went make-up free in the picture, showing off her natural self, which is also rare for her as her face is always made up.

While most people thought her granddaughter was adorable, they couldn’t help but comment on her hairstyle.

Theresa is known for her high hairstyles and has been trying out different ones recently.

Fans were loving her most recent one.

“So cute! Love your hair like that!” one fan said, adding a heart-eye emoji.

“I Love your hair!!” said another with a bunch of hearts.

“Your hair looks beautiful like that,” added a third.

Theresa typically wears her hair in a half-up, half-down style, so when she changes it up, fans love it.

“Love your hair DOWN,” pointed out one follower.

Many people had the same sentiments, praising her and the baby.

At 55 years old, Theresa is still a young grandma and likes to remind people that she is.

She had been showing off her toned legs in short dresses recently and fans were quick to praise her.

The reality star took to her Instagram Stories to share a snap with her pal Christiaan Choy.

The TV personality posed with her tanned leg draped over the creative consultant’s knee as she popped her head back in laughter.

During a meet and greet for her stop in Georgia, Theresa wore a black jacket and short black shorts that showed off her toned legs.

Her long legs were tucked into a pair of high heel shoes, while her hair exploded over her like a firework.

Fans, once again, gave her praise and called her a “hot grandma.”

She also posed in a stunning two-piece bathing suit at the end of April during a Florida getaway with her cousins.

Theresa wore a white cover-up over the pink suit, along with a pair of sunglasses.

Her hair was pulled back and gave off beachy vibes.