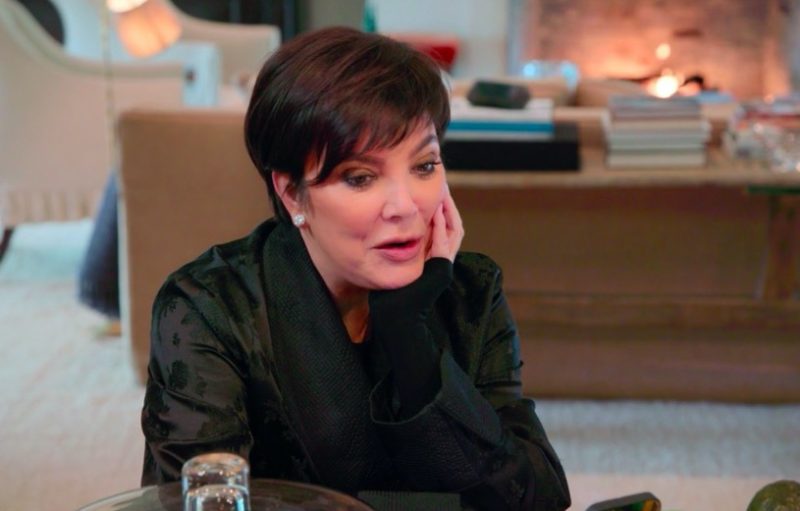 KRIS Jenner has been slammed for her “outrageous” demand to her kitchen staff during her daughter Kendall’s “painful” cucumber cutting scene.

The model struggled to slice a cucumber in the latest Kardashians Hulu episode and fans have been mocking her since.

HuluIn the latest episode of The Kardashians on Hulu, Kendall struggles to slice a cucumber by herself to make a snack[/caption]

Kendall, 26, slicing a cucumber went viral on TikTok as the clip was posted by the user Michelle Andrews, and now a fan turned the heat over to Kris, 66, on Twitter.

The Twitter user commented: “The way Kendall has zero skills or common sense is painful to see.”

They continued: “But watching Kris just staring and not teaching her grown daughter how to do it is horrible, but sure, call the chef without saying please or thank you.”

The user harshly concluded: “No wonder Kendall is entitled af.”

Another fan remarked: “Kendall not knowing how to slice a cucumber on The Kardashians and Kris yelling, ‘Chef!’ to come help her really puts their wealth into perspective.”

In the scene fans are raging over, Kris noticed Kendall struggling to cut up a cucumber.

Kris asked Kendall if she “wanted the chef to make her a snack.”

Although Kendall replied: “I’m making it myself, just gotta chop up some cucumber. That’s pretty easy.”

The model then crossed her arms to hold the vegetable down as she used the blade.

As she proceeded to slice the cucumber with much caution, Kendall admitted: “I’m kind of scared.”

The comment section in the viral TikTok was filled with fans discussing the “strangeness” they had just witnessed.

One fan commented: ” [She said,] ‘It’s pretty easy,’ [and] then chops it the in the weirdest way possible.”

Another joked: “She’s so brave trying to cut it by herself!”

A third added: “The job security that chef has…”

Yet another fan contributed: “I always knew they were so far removed from reality, but watching Kendall try to cut that cucumber was painful.”

The Kardashian mom-ager was slammed for the kitchen catastrophe, although fans were in Kris’ corner when they slammed Scott Disick’s “appalling” behavior towards her.

After the three children that Scott, 38, shares with his ex Kourtney Kardashian, 43, were left out of her engagement party to Travis Barker, he had a bone to pick with Kris.

Sitting down over lunch with her, Scott snarked: ” You don’t invite me to half the s**t you do anymore.”

With her birthday coming up, Scott questioned what she was doing to celebrate.

Kris looked uncomfortable as she tried to downplay the celebratory dinner she had planned with all the family.

He said: “Nobody told me,” looking disappointed.

Addressing the snub, Scott complained: “For me to hear that you’re having a little soirée and you don’t think to invite me, makes me feel like complete s**t.”

In a confessional however, Kris, had little sympathy.

She said: “I never expected him to be so angry and wound up over this. He just needs to grow up and be a little more mature.”

Back at lunch, Scott continued: “Could you imagine if I singled you out? It’s just mean!”

Kris replied to him: “I don’t have a mean bone in my body.”

He then snapped back: “You do!”

After the outburst was released on Hulu, fans on Reddit discussed his behavior.

Scott has complained across multiple episodes that he feels left out.

He is the dad to Kourtney’s three kids, Mason, 12, Penelope, nine, and Reign, seven.

However, many viewers feel that his repeated protests about not being invited to family events are unjustified, given that he and the Poosh founder split in 2015.

Also in episode five, viewers saw Scott get into a nasty argument with Kendall Jenner, 26.

She stormed off after he bickered about not being invited to her “intimate” birthday gathering, at which she claimed she didn’t want to make her sister Kourtney “uncomfortable”.

As he continued to argue and talk over her, the model grabbed her food and said: “I’m out, this is so f***ing ridiculous.”

While Travis and Kourtney have felt no need to hold back on their PDA around Scott, he has also been moving on in his personal life.

At the premiere of The Kardashians, he bought along 27-year-old Rebecca Donaldson as his date.

HuluHowever, fans were in Kris’ corner when her daughter Kourtney’s ex Scott Disick shared harsh words with the mom-ager over lunch[/caption]