Sophia Grace and Rosie: Where are they now? 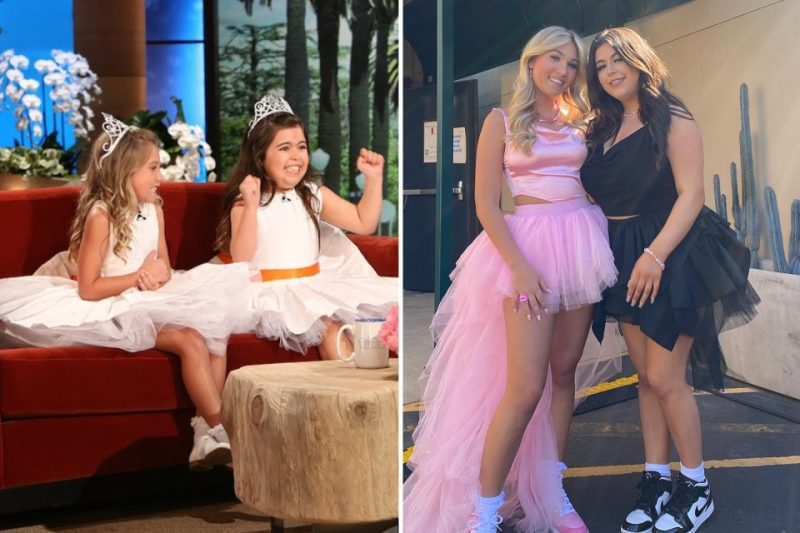 The YouTube sensations garnered even more popularity when they performed Nicki Minaj’s Super Bass during their television debut on The Ellen DeGeneres Show.

Where are Sophia Grace and Rosie now?

In the wake of their social media fame and TV stardom from Ellen, Sophia Grace and Rosie have taken advantage of many showbiz opportunities.

On February 27, 2019, she launched LoLo London, a fashion brand designed to be “a voice and a brand for anyone working hard to achieve something positive in their lives, our brand is influenced by the talented and positive youth of today.”

THE END OF ELLEN

Find out when The Ellen DeGeneres Show’s last episode premieres

In a press release at the time, the creator stated: “I’m really into smart-casual wear right now and think this collection reflects my personal style at the moment.”

“The most amazing part about the design process is interacting with my social media followers, I love reading the comments and dm’s to see what color or style is their favorite.”

Sophia also shouted out her pal Ellen and fellow star Nicki Minaj in her statement to the press.

“I can’t wait to gift Ellen a hoodie, I think she will look great in the white hoodie as I’ve seen her wearing white before and it really suits her.”

most read in celebrity kids


Find out what Sophia Grace & Rosie have been up to since Ellen!


How many kids does Kendrick Lamar have?


How many children Michelle Williams has revealed


What to know about Donna Mills’ daughter, Chloe Mills


Everything to know about Rebecca Romijn’s children


All you need to know about Chanel Iman’s husband

“I’m also going to be sending a Sunset Orange hoodie to Nicki Minaj and a White Hoodie to Ariana Grande.

“I’ve already sent a Sunset Orange hoodie to my cousin Rosie and she loves it.”

Rosie, turning 16 on September 7, updates her fans through her social media profiles.

On TikTok, Rosie amassed over 39million views and has over 776,000 followers on Instagram.

Michael Rozman/Warner Bros.The two singers and social media influencers came back to Ellen and chatted about ‘where it all started’[/caption]

Taking on a music career, she premiered her first single Handstand in 2018.

In 2022, she released another single, Safe in Your Love, to coincide with her and Sophia Grace’s return to The Ellen DeGeneres Show.

When did Sophia Grace and Rosie return to Ellen?

On May 12, 2022, Sophia Grace and Rosie stopped by The Ellen DeGeneres Show.

Their appearance marked more than 10 years since they first came on the program on October 12, 2011.

While donning their trademark tutus and tiaras, the duo caught up with Ellen on Thursday, May 12, and the three commemorated their shared history on the talk series.

During the segment, the three reminisced as Sophia Grace said: “We were so nervous, that was such a good montage. We haven’t seen anything like that recently.”

“I didn’t know who she was until it clicked that Sophia was singing her song all of the time.”

The English duo also discussed how their YouTube cover of Super Bass came to be in the first place.

Sophia Grace recalled: “As a child, I always used to play dress up.”

“I was dressing up, and Rosie’s favorite costume happened to be The Virgin Mary — you know, Mary and Jesus,” to which Ellen comically replied “Yeah, I heard of her,” which brought on laughter from the studio audience.

Sophia Grace continued: “I was around and Rosie was wearing the outfit.”

“I kept singing Nicki Minaj all the time and my Auntie, Rosie’s mom, was the only one who had an iPhone.”

“She said ‘Why don’t we film it? Rosie, quickly get out of the Virgin Mary outfit and get into that outfit.’”

The three took a stroll down memory lane as they looked back on hosting red carpets, releasing their first book, and meeting celebrities such as Taylor Swift, One Direction, Katy Perry, Justin Bieber, Drake, and of course – Nicki Minaj.

As Sophia Grace and Rosie gave viewers the scoop on their respective music careers, Ellen asked the two, “Would it be too much to ask to do Super Bass one last time?”

The former child star duo granted her request and the two took the stage for one last rendition of the aforementioned song.

Ellen’s show will come to an end on May 26, 2022, which means that Thursday’s broadcast was their last appearance on the program.