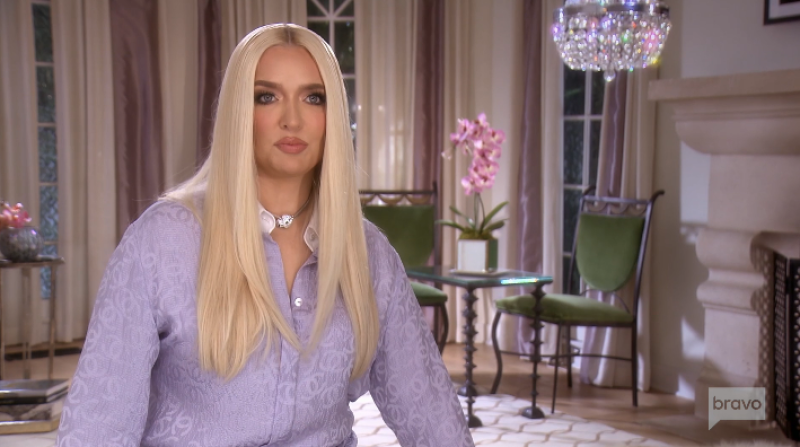 ERIKA Jayne has been slammed for her “nasty” treatment of Bravo producers when she was asked about her lawsuit.

The RHOBH star, 50, snapped when questioned over accusations that more than $20million from her ex Tom Girardi’s law firm ended up in her entertainment company.

Erika denied that she ever had the money while chatting to costar Garcelle Beauvais.

“There was never 20 whatever million in my LLC, the $20 million elephant in the room,” she protested.

Erika then said all of their costar Sutton Stracke’s claims about Erika taking $20million were “disproven”.

In a confessional, a producer asked her: “How and when was this disproven?”

Erika took a sip from her cocktail before firing back: “I don’t know, you’ll have to check all that s**t out, but it was disproven early so Bravo can do their due diligence. I don’t really know.”

The producer then asked: “I guess my question is, is the proof available to the public?”

Erika snapped: “Yeah, duh, tell them to go f**king read everything that my lawyer has put out and that they can answer their own f**king questions. Thank you.”

Viewers flooded Twitter with their outrage over Erika’s “rude” behavior towards production.

One wrote: “Erika’s nasty a** attitude with the producers while filming confessionals should be enough for this to be her last season.”

Another added: “The way Erika is so rude to production?!?! B***h you need to respect them… you need this show!!!! Don’t bite the hand that feeds you…

“She was mean and rude to them in her confessional! Saying things like Bravo could rewind it and find it themselves.”

A third posted: “Why is Erika being such an a**hole to the producer for asking questions? She’s literally doing her damn job.”

Erika and Tom, 82, have been accused of stealing settlement funds intended for the families of victims killed in a 2018 plane crash.

Court papers seen by The Sun show Erika’s company was allegedly given more than $25million by her ex’s legal firm, which has now filed for bankruptcy, and she is being asked to pay it back.

The RHOBH star, 49, “used her notoriety and glamor” to hide the funds, which included “jewelry and luxury items”.

She has continuously denied knowing anything about her husband’s finances during their marriage and said the money was not for her.

Erika filed for divorce from Tom in November after 21 years of marriage.

A month later, they were hit with a lawsuit for embezzlement that claimed he had “resorted to embezzling the proceeds of settlements,” including ones for those who had lost loved ones in a plane crash.

The complaint accused him of embezzling the settlement proceeds in order to “continue funding his and Erika’s lavish Beverly Hills lifestyles.”