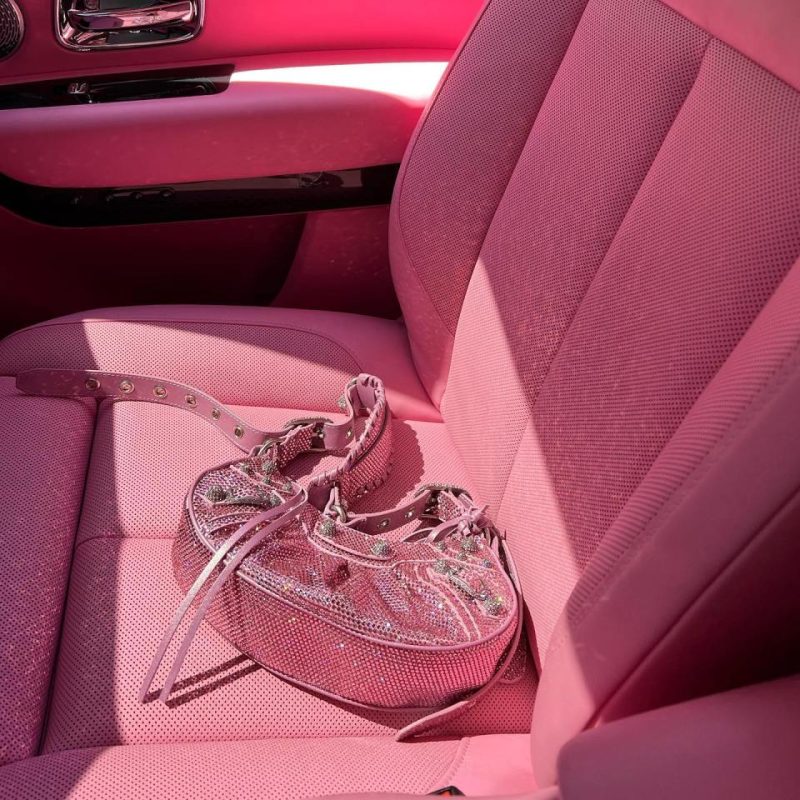 KYLIE Jenner fans have become shocked by the staggering price of the “ugly” Balenciaga bag in the new picture inside her all-pink $300K Rolls Royce.

Kylie, 24, has taken a snapshot of her passenger seat on Instagram.

Instagram/kyliejennerKyle bought her Rolls Royce back in 2020[/caption]

The passenger inside her fancy car happened to be a Le Cagole shoulder bag with pink rhinestones, which costs about $7K.

The pink seat cushion matched with the fabric of her shoulder bag.

The Keeping Up With The Kardashians alum planted the bag sideways on the seat.

Kylie posted a pink heart emoji in the caption.

The Barbie-pink exterior of the fancy car has an all-black exterior.

She captioned her post on social media: “New mom car.”

Among the features, each of the four doors open outwards, and a special booster seat has been included for her daughter.

The Hulu star and rapper Travis Scott, 31, are the parents of their 4-year-old daughter Stormi.

“Stormi’s Mom” is engraved on the bottom of the driver’s seat door.

KUWTK fans were not pleased in the comments section with the look of her shoulder bag.

One fan added: “This bag madam…” with a sick face emoji.

Another fan posted an emoji of a face vomiting their insides.

Recently, the Kardashians star stunned in a trench coat, bag, and boots from Diesel’s Fall 2022 collection.

This was her first full-length photo since she gave birth to her second son, whose name is still unknown , back in February.

The TV personality also posted a snapshot of her four chunky gem rings from the Pieces Of Four brand.

The Kardashian family was slammed by fans for their excessive displays of wealth.

The backlash came after her sister Kim Kardashian, 41, angered her followers with comments about work and success.

In a recent interview with Variety, she said: “I have the best advice for women in business. Get your f**king a** up and work.”

Kim continued: “It seems like nobody wants to work these days.”

One critic wrote: “I love the ladies, but this screams of privilege. I’m sorry it’s not so easy for many.

Another critic wrote: “They have no idea how the ‘real’ world works. Many women aren’t able to get the babysitters and luxury things in their everyday life that they have.”