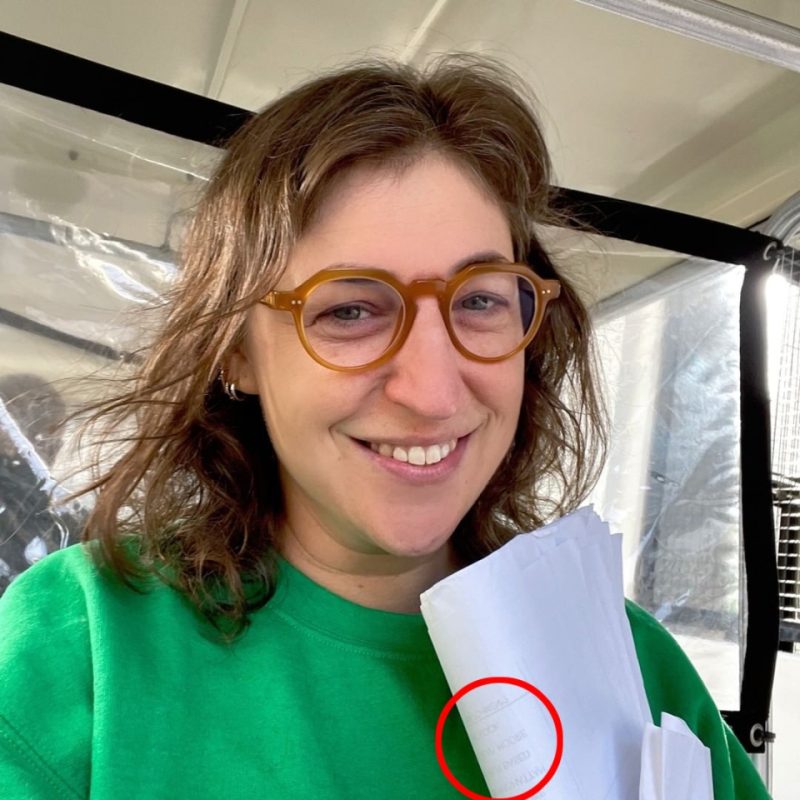 They claimed her May 10th Instagram photo had visible clues written in a potentially “colossal” mistake.

Mayim Bialik/InstagramJeopardy!’s Mayim Bialik shared a makeup-free selfie with papers when she returned to host this week[/caption]

Mayim, 46, is hosting Jeopardy! this week, returning after Ken Jennings’ three prior weeks at the helm and shocking announcement he’d be out for “MONTHS.”

The permanent hosting slot, is for lack of a better word, still in Jeopardy, and will be decided on July 29th at the end of Season 38.

But now also Jeopardized according to eagle-eyed fans is an upcoming episode.

Internet users noticed Mayim was holding papers in her makeup-free May 10th Instagram selfie returning to set, and dozens soon buzzed in claiming the text had gameshow answers.

The close-up natural-looking photo featured the Blossom actress with her brunette hair in loose waves, captioning it:  “Good morning,” with a smiley face emoji.

She donned a green sweatshirt and brown, wide-framed glasses paired with a smile – and papers.

Fans realized her caption wasn’t the only text to be found.

They claimed three answers, including Final Jeopardy from an upcoming episode, were visible on the papers – and figured them out.

WHAT ARE: THE ANSWERS?

The original poster wrote: “She is holding a broadsheet of clues. If you look closely enough, some of it is legible.”

They added,” I was under the impression that no game material is supposed to become public until the episode has aired,” with Jeopardy! taping their shows months in advance.

However, that did not stop fans from figuring out the potential “partially visible clues” the show has gone to “great lengths” to conceal, as they noted.

The visible text for the first clue read: “ly Crudup …the blues…godlike…Manhattan..film based…Moore..icbook,” one alleged.

Piecing it all together a fan replied: “I can see two correct responses, Watchmen and Colossus.”

Another noticed that even more text seemed to reveal a Final Jeopardy, the most consequential last round.

“This portion is not written in uppercase Korinna ITC like the rest of the page, which suggests it is a Final Jeopardy clue about George Patton,” they speculated.

‘THIS IS A DISASTER’

Dozens of fans replied in sheer shock over the potential spoiler of an entire episode especially as Mayim is gunning for the full-time gig.

“Yikes. Not a good look for the possible host to be leaking material,” wrote one user.

A third speculated on the possibly serious implications: “Unless contestants are getting the heads up before the game it’s just a little spoiler, nothing illegal.”

Regardless, more fans were floored, as another replied: “No. It’s potentially a matter for internal review.”

Another gently assured: “I think she’s probably fine, though she should be more careful.”

Though a final user commented on what was seemingly a major mistake for the storied game show: “This is ridiculous!”

Ken announced on Twitter this week: “I’m handing the keys back to the talented actor-producer-writer-director (!) Mayim Bialik for a few months.”

“We are lucky to have her! Thanks for watching, and I’ll be back before the end of the season.”

Ken and the Big Bang Theory alum started filling in for the legendary Alex Trebek after his tragic passing and a fleet of Season 37 celebrity guest hosts.

Fans were instantly stunned by the sudden departure from the show’s Greatest of All Time champion as many want him to take over instead.

One wrote: “For a few months? Guess I won’t be watching for that long, then.”

Even most recent streak-holder Mattea Roach – now the show’s fifth longest-consecutive winner ever -stated after her run she wanted Ken to take over.

“As a contestant, there is something really special about being onstage with the greatest player of all time,” the 23-year-old told Vulture on the respected figure.

Mayim has also had a few unfortunate banter blunders with contestants this week, fans felt.

On Tuesday, a contestant explained in the Q&A round that they helped implement a new way for kids to be tested for autism with saliva instead of a prick of blood.

Mayim had another less-than-flattering remark before Ken returned for his and Mattea’s recent stretch and generally higher ratings.

She told a doctor he was “just an anesthesiologist, not a surgeon.”

RedditThe photo of her holding papers had ‘partially visible clues’ they said, before figuring them out[/caption]