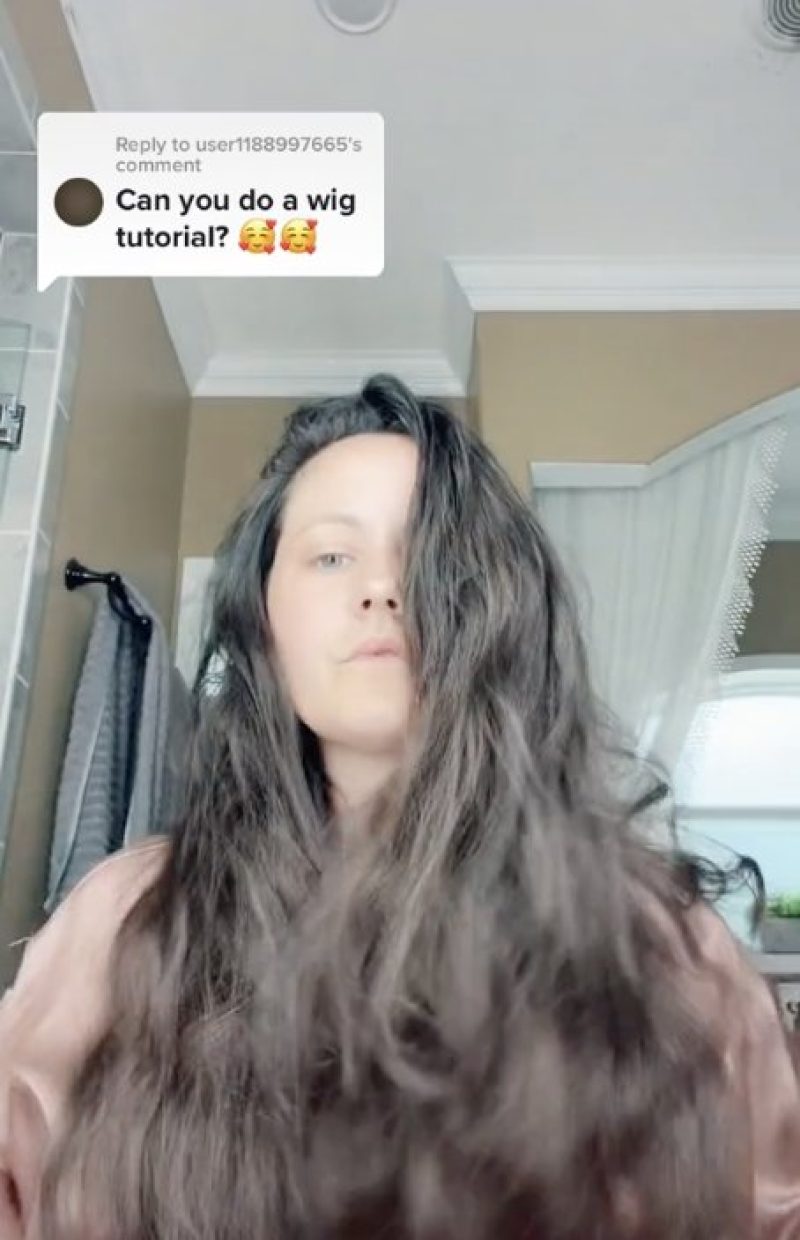 TEEN Mom Jenelle Evans has responded to rumors she secretly wears a wig.

The mother-of-three countered the rumor in a TikTok video.

The video begins with Jenelle, 30, undoing her braid.

In the upper left corner of the vid a user comment asks: Can you do a wig tutorial?”

Jenelle then proceeds to remove her hair tie and tousles her thick mane of hair.

She zooms in the camera and shakes her hair as if auditioning for a L’Oréal shampoo commercial.

The video ends with the Teen Mom alum running her fingers through her salt and pepper hair.

The TikTok is captioned, “no wig…that’s glitter in my hair”.

One fan addressed the mom-of-three’s streaks of gray, “I love the stripes coming through!! Natural silver is gorgeous”.

Jenelle responded saying, “Yes, def got a lot of grays. My [biological] dad had full gray hair by 40 and I’m 30 so I think it’s coming”.

Another follower added: “Beautiful.. and the gray is mama glitter.”

The 16 & Pregnant alum replied to this comment as well, stating “Yesss! I was talking about the dots in at the end in my scalp”.

More fans continued to comment on the wig accusation.

As one stated, “that’s not a wig that’s l her real hair she’s got some long luscious beautiful hair she takes good care of”.

While a second commented, “that ain’t no damn wig that’s some beautiful natural long hair with a little sprinkle of wisdom stripes”.

Jenelle wore just a satin robe for the duration of the TikTok, possibly giving her fans a sneak peak of what’s to come as both her and husband, David Eason, 33, recently joined Onlyfans.

The socialite launched her account this past Saturday, as she encouraged her social media followers to subscribe to her page.

ONLY FANS OF EACH OTHER

While Teen Mom fans were surprised by the announcement that Jenelle was joining the platform fans were truly shocked when husband, David Eason revealed he’d be joining as well.

He shared a picture and link on Instagram of some of the content subscribers can expect to see.

In the photo, the 33-year-old reality star leaned back seductively in an outdoor lounge chair.

He was wearing only a tight pair of boxer-briefs, with his privates covered by a smiling emoji that stuck out a dollar bill tongue.

“Yep…I did it,” he posted on the pic, adding a graphic offering a 50% discount for new subscribers.

On the actual website, the full picture laid behind a paywall. But David did promise: “Much more to come my loves.”

According to responders on Reddit, it seems the answer may be none.

“Nothing about this is good,” one Reddit user expressed, as another added: “Can you say desperate? Y’all are nasty trash.”