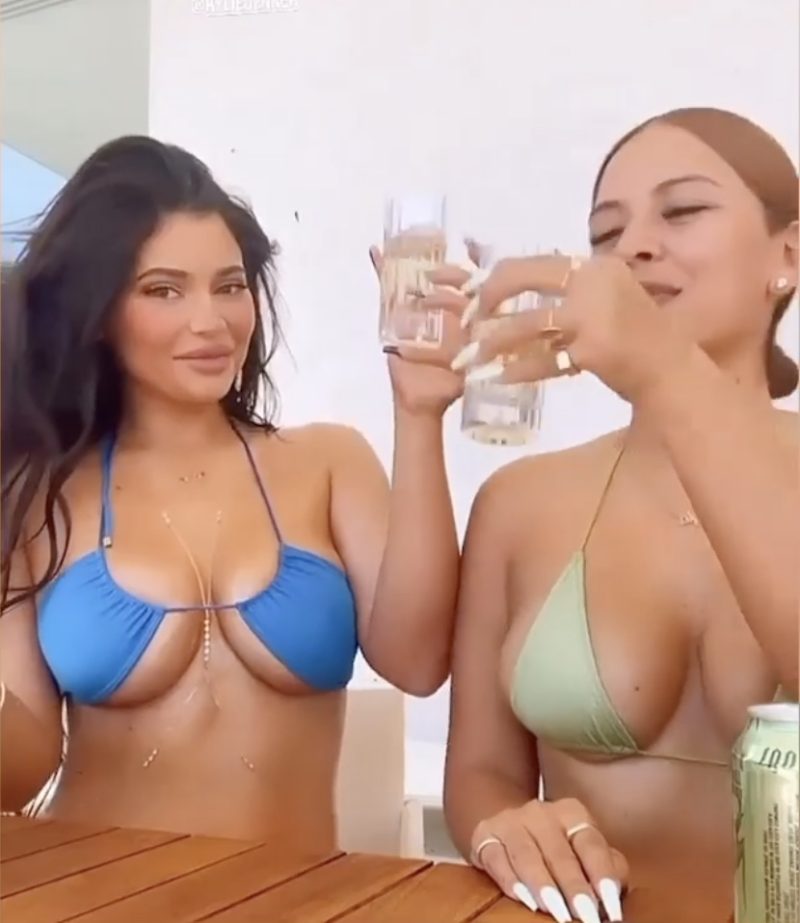 KYLIE Jenner has shown off some major underboob in a newly shared video tribute to BFF Yris Palmer, a day after her birthday.

In the quick video, Kylie rocks a tight blue bikini top that struggles to conceal her breasts, which instead pour out of the top and bottom of the swimsuit.

Yris looks ready to pop out of her green bikini top as well, as the two besties toast and share a shot of something strong enough to make them both choke a bit.

Kylie captioned the video: Happy birthday to my bestie @yrispalmer !!!!!!!!!!! the rarest and realest i love you so much!!

Yris turned 32 on May 10, but the video most certainly is a throwback, as the influencer is currently pregnant, and is expecting to deliver any day now.

On Valentine’s Day, Yris revealed that she was then about six months pregnant with her second child, and showed off her baby bump during a photo shoot.

In a short video to followers that day, the Star Lashes founder posed in a stunning gown as she lay down on a piece of furniture covered in white drapes.

Her daughter Ayla had a huge smile on her face as she wore a gorgeous white dress.

Yris played with her daughter’s curly hair as the camera snapped away.

Last month, the Star Lashes founder threw an extravagant baby shower, and Khloe, Kylie, and Kris Jenner were all in attendance.

The affair appeared to have a color theme as most everyone showed up in shades of blue.

For Khloe, she flaunted her thin figure in a bright blue pantsuit.

She rocked tight bottoms that pooled at her feet and a matching top.

The long-sleeved button-up was turned into a crop top as the reality star tied it up at the bottom, revealing a sliver of her toned tummy.

She gave a closed-mouth smile and wore a pair of oversize sunglasses as she posed next to the woman of the hour, who wore a strapless dress for her shower.

Yris shared this photo of the two of them together, as well as a slew of others for her big day, on Instagram.

She captioned the collection: “Beautiful day with beautiful people.”

Khloe jumped into the comments to write: “We love you so much!

“I can’t believe you’re still so tiny pregs! All belly!!

“Such a beautiful shower.”

Though she may not have been able to let loose this year, the two still have the memories of her birthday celebration last year to help them get by.

Last year, Kylie whisked her best friend away on her $72 million private jet for a girls getaway over the weekend.

The pair jetted off to celebrate Yris’ birthday, sharing cocktails, champagne, and shots along the way.

The two moms – Yris has daughter Ayla and Kylie has daughter Stormi Webster – had a full, multi-day itinerary set for the trip, with a breakdown printed out for them to look over while on the flight.

Before they could get to any of the official moments on the itinerary, Kylie and Yris enjoyed all that the Keeping Up With the Kardashian star’s private jet had to offer.

Yris sat in style on a plush, white leather seat and an accompanying footrest as she wore a blue lounge set and a pair of Kylie brand slippers.

In another snap shared from up in the sky, six glasses of rose champagne sat ready for the girls to cheer and sip.

The plane-ride party didn’t end there, though, as there ere also tropical drinks with slices of pineapple and little umbrellas, as well as some nighttime shots.

A few other friends joined for the getaway, and they all held up their little glasses and cheersed before shooting back the alcohol.

Kylie screamed right before drinking hers: “To Yris!”