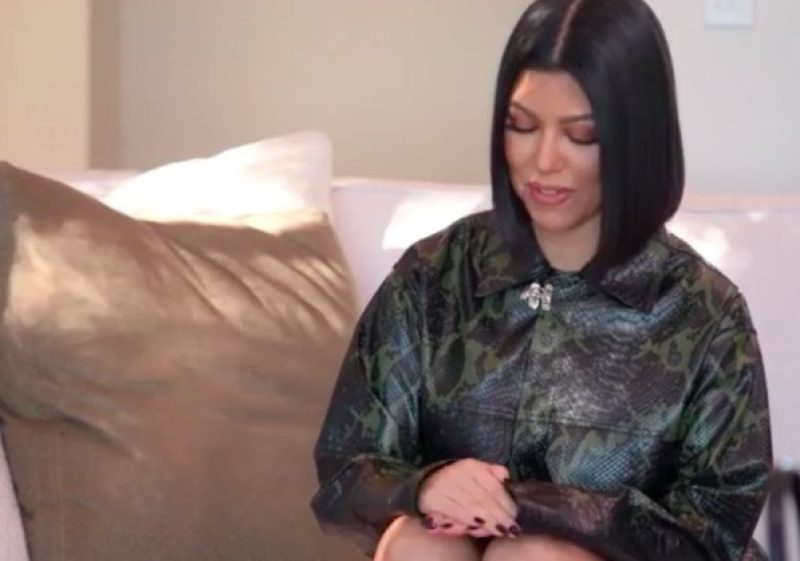 KOURTNEY Kardashian has admitted she ‘hysterically CRIED for hours’ after doing ‘the worst thing she’s ever done in her life.’

She told her momager, Kris Jenner, what happened on Thursday’s Hulu episode.

Kourtney, 43, sat with her mom Kris, 66, and made a shocking confession on the fifth episode of The Kardashians.

Covering her engagement hand with her other hand after her rosy 2021 engagement to Travis Barker played out last week, mom Kris bluntly asked: “Where’s the ring?”

Kourtney said in the scene which aired May 12th: “This is probably one of the worst things I have ever done in my life, by the way.”

With a gasp, Kris responded, “get to the punchline!” wanting to know what happened.

Kourtney then shared her mishap: “I was sitting on my floor folding sweatshirts and I took the [engagement] ring off and I put the ring on the floor thinking it would be safe right next to me.

“So I had to get up and get something from the closet above me and when I stepped down, I stepped on the ring.

“I was hysterically crying in my closet for hours,” Kourtney said as she sat with her bobbed black hair down in a fully zipped jacket and no ring.

She then added: “Then I called Travis and I’m like ‘I did something really, really bad.’ And he handled it the best. But it really gave me a nervous breakdown.

“And I was just like ‘this is the most beautiful thing I’ve ever had in my whole life. And how could I break that?’”

Diamond experts at Steven Stone valued the massive oval-shaped diamond at a whopping $1million in 2021, and the Keeping Up With The Kardashians alum said she’s now “getting it fixed.”

‘RINGING’ IN THE NEWS

This wasn’t the only bombshell of the quite literally “crushing” scene.

Kris then told her daughter that Travis, 46, shared years before they started dating that the reason he said he moved to Calabasas, California specifically is that he “knew Kourtney lived in Calabasas.”

Kris shared Travis told her: “I knew that she was the love of my life and I didn’t even know her like that.”

“But I knew if I couldn’t date her or be with her, at least I would be near her,” Kris relayed Travis having said with a glimmer of sweet authenticity.

Kourt the said she has “never met a more thoughtful person in her life.”

During the previous fourth episode of the Kardashians show, viewers watched as Kourtney got her dream proposal from Travis in Montecito in 2021 but it turned into a familial nightmare.

Present for the special moment were sisters Kim Kardashian, Khloe Kardashian, Kylie Jenner, and Kendall Jenner as Travis proposed on the beach, surrounded by dozens of flowers and candles.

But Kris made the decision not to include Kourtney’s three children -which did not go well, while Travis’ children Landon Barker and Alabama Barker were there.

“But the kids should’ve been there regardless #TheKardashians.” one fan wrote.

Kourtney even quoted the tweet after the episode aired and wrote: “FACTS!” with two crying emojis.

After the proposal last episode, Kourtney realized she had missed a few calls from her daughter Penelope, which she rushed to return.

She slipped away to chat, sharing the exciting news by saying: “P! Do you want to know what my surprise was? We got engaged!!”

Her daughter shouted back: “Hang up!” before ending the call herself.

Then, in a confessional interview, Kourt said: “Penelope took it hard. I think it’s a big change for her. And even though she loves Travis, I don’t think she knows what that means.”

She FaceTimed son Reign, too, telling him on the phone that she’s engaged – her son shouted back: “Not exciting!”

“I do wish that my kids were here,” Kourtney then admitted in another confessional.

“I think it would have made them feel more included and part of the surprise. I know that my mom made that decision, and it probably wasn’t her best.”

Kourtney tried to call Mason several times, but he ignored every call.

His looming presence in the family and in their show was part of the reason they weren’t included in the festivities.