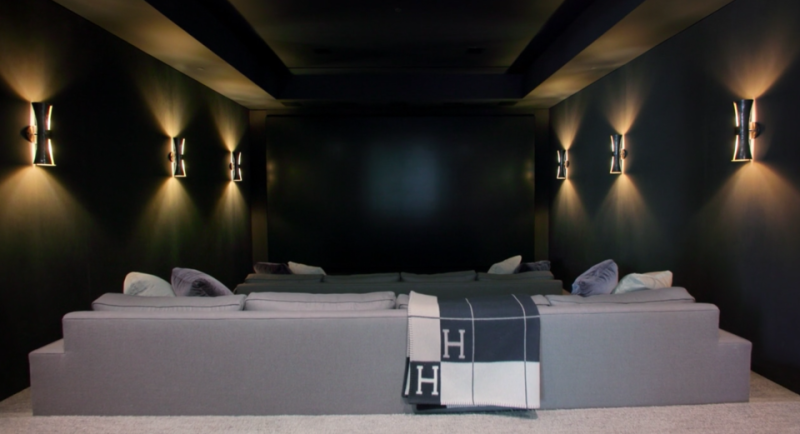 The Keeping Up With the Kardashians star recently moved into the opulent home, situated right next door to her daughter Khloe’s new property.

Now Kris, 66, has given an inside look at the stunning movie theater in her beautiful Hidden Hills mansion.

During Wednesday’s episode of The Kardashians, the reality star hosted a formal dinner for family and friends in honor of her birthday.

The TV personality gave her guests a tour of the property, including a state-of-the-art movie theater complete with a massive screen and two rows of luxurious seating.

The screening room was complete with dimmable light sconces lining the walls, finished off with comfy pillows, and littered with $1.7k Hermes blankets for cuddling.

KRIS HAS IT MAID?

Kris reveals current FAVORITE child because she ‘cleans her bathroom’

In the new season of The Kardashians, Kris has given fans an intimate look into her brand new abode.

Viewers have been able to see the Kardashian momager’s over-the-top kitchen, as her daughter Khloe Kardashian, 37 gushed over her crystal glassware.

On the evening of the matriarch’s birthday, the family, and friends including Ellen DeGeneres and Portia DeRossi, and Faye Resnick, arrived at the mansion for her special dinner.

Her huge white kitchen featured massive matte black fridges, and one see-through one filled to the brim with fresh green vegetables.

A courtyard was neatly positioned in the middle of her home which also contained a fully equipped gym, a lavish piano room bar, and seating area, a dish display room, a foyer, and a front yard on the exterior.

Kris also bragged that her new spot has “real Tiffany lamp” chandeliers throughout.

“Living in Kris Jenner world is just fabulousness,” Khloe exclaimed in the episode as she toured a sitting area with a “little martini table.”

“It’s like sensory overload,” she added, as the camera panned to the modern and elegant open floor-plan kitchen with exposed black shelving.

Rows of what looked to be exclusively crystal could be seen neatly displayed on the shelves as Kris sipped a martini in a “crystal glass” Khloe noted, as her mom wore a floral gown.

“And dinner China and fabulous sh** everywhere,” Khloe gushed before fans got to see more kitchen.

Behind the glass were exclusively green veggies, including broccoli and much more sitting as they chilled in the clip.

Then, the camera showed a pantry exclusively dedicated to fine China, with dozens upon dozens of plates of different patterns and sizes neatly organized by design.

One similar dinner plate from DIOR costs $150, though it wasn’t revealed where Kris’ plates came from.

Fans also got to see Kris’ kitchen earlier on Kourtney Kardashian’s Instagram Stories on May 9 where an Alice in Wonderland figurine was spotted near the toaster.

In the photo, one side of the fridge was lined up with dairy, eggs, and bread, as well as Veuve Clicquot champagne and bottles of still and sparkling water, the other side was ice cream and desserts.