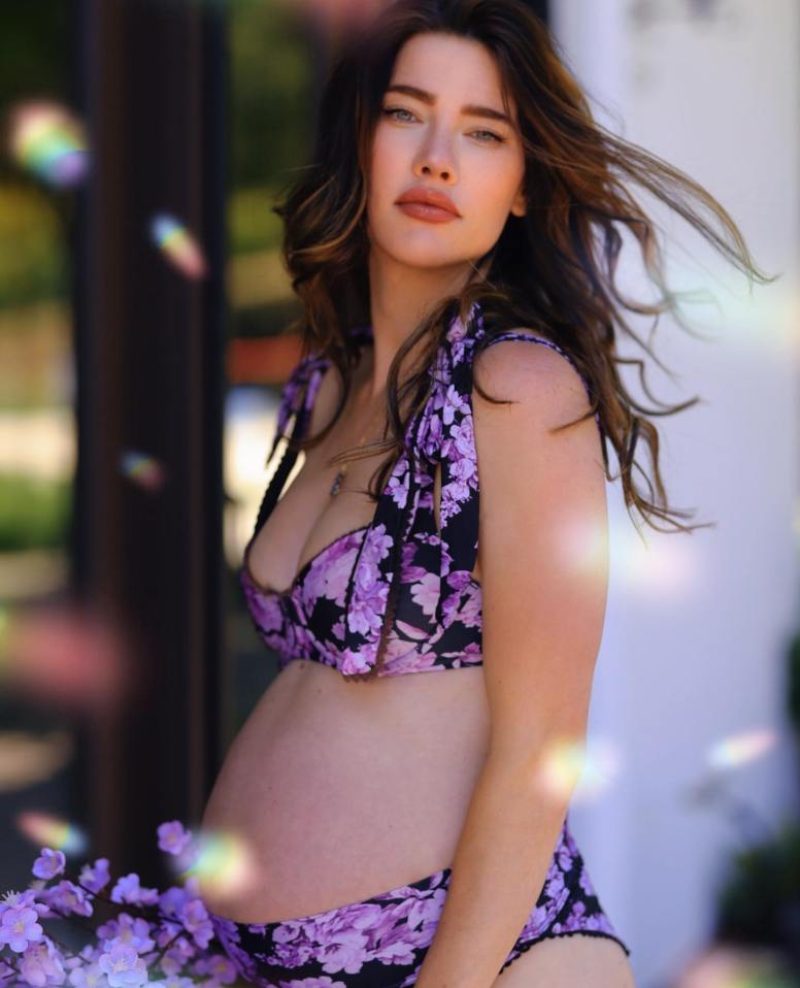 THE Bold and the Beautiful star Jacqueline MacInnes Wood has shown off her growing baby bump in a purple bikini for a new maternity photoshoot.

The 35-year-old actress, who’s pregnant with her and her husband Elan Ruspoli’s third child, is just days away from her due date.

As Jacqueline’s character Steffy has been going through many ups and downs on B&B the last few weeks with the death of her husband Finn, the actress has been enjoying the final days of her pregnancy.

She often keeps her Instagram followers updated on the growth of her baby bump and gave offered up her latest look on Tuesday.

In a new pregnancy shoot, Jacqueline posed for a couple of photos in a gorgeous purple bikini.

The two-piece swimsuit featured purple and pink flowers all over a black base.

Read More on The Bold and the Beautiful

The top had a sweetheart neckline with oversized ties keeping the straps together.

Both shots showed off the actress’ bump with the brief-style bottoms sitting low on her waist.

In one snapshot, Jacqueline held a matching bouquet of purple flowers in front of her belly, while the other snap she brought them down to reveal her whole bump.

She kept her makeup natural with just a touch of mascara and a bit of red-nude lipstick.

Her hair was styled in waves and stayed calm in one of the shots and windblown in another.

In the caption, Jacqueline posted just two emojis – a white heart and sparkles.

In November, Jacqueline announced she was expecting her third child with her husband.

Sharing with People at the time, she said: “I am excited to announce that I am pregnant with my third child, due this spring.

“Elan and I dreamed of having a large family as we are both only children and are over the moon that our dreams are coming true.”

While an exact due date for the actress is unclear, she recently shared that she could be expecting the baby any day now.

On March 11, Jacqueline flaunted her bump in a blurry, nude photo on Instagram, revealing a bit more about when the baby will arrive in the caption.

“Forest bathing… #30weeks,” she shared, putting her at about 38 weeks now.

The actress revealed to ET Canada that she’s “basically filming like right up until [she gives] birth,” which is expected to be later this month.

Since 2018, The Bold and the Beautiful star has been married to talent agent Elan.

Throughout the course of their marriage, they have welcomed two children together – sons Rise, three, and Lenix, one.

When talking about her firstborn, she revealed that his name is a symbol of growth.

“We chose Rise because to us Rise means growth, the simplicity of moving forward,” Jacqueline told People.

“We look to our son as an uplifting force toward positive change and a better world.”