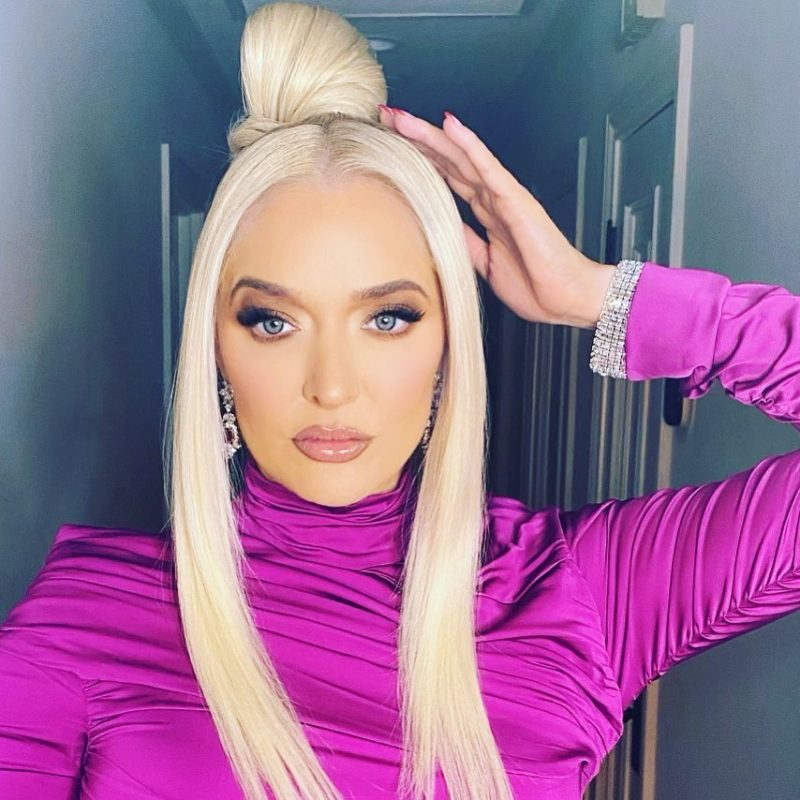 She was spotted picking up a delivery outside of her home the day of the Real Housewives of Beverly Hills premiere.

Erika, 50, looked starkly different than usual in new photos obtained by The Sun.

The Bravo star in the midst of a $50M lawsuit walked to the front gate of her home, bending to receive a delivery of flowers, her blonde hair down and seemingly zero makeup.

She wore a loose grey sweatshirt and black leggings against her pale and slightly puffy complexion.

The disgraced Real Housewives longtimer then subtly closed the gate and returned.

A second delivery then also appeared to arrive; Erika waved while physically at a 90-degree angle to that delivery person.

Erika’s pared-down appearance came after a wild Season 12 trailer and a shock interview about her “mixing alcohol and pills” ahead of May 11th’s premiere.

MiS3The day of RHOBH’s Season 12 premiere, Erika was seen fumbling with the gate as her dog was behind her[/caption]

MiS3Makeup-free, she then appeared to return for a second delivery, seemingly of food[/caption]

“Well, look, I’ve been very open and honest. I mixed alcohol and antidepressants, which I didn’t know that it would make you this drunk and it did,” Erika told Us Weekly on May 10 in her bombshell.

“I do not have a problem and lesson learned and we go on. I mean, are you gonna see a moment that, you know, you will probably be like, ‘Is that Erika?’ And the answer is yeah. I mean, that was me.”

“At that time, it was really difficult because there were moments that I didn’t wanna get out of bed — more than moments, there were days …” she added.

“And let’s be honest, you know, you’re sitting at these parties and some of these women are kind of boring.

“So you have a drink [and then] you have another drink. And then you’re like, ‘Where am I?’”

Erika was referring to the aforementioned trailer for the show’s new season from April.

While standing next to Lisa Rinna, 58, a drunken Erika said: “Oops!” before she collapsed onto the floor.

In the next scene, Erika needed her purple glasses to cover her eyes as she seemed to be hungover, saying: “Oh my god! I’m so lit!”

Lisa knowingly warned her: “You take anti-depressants or you drink. You can’t do both.”

Erika then got involved in shouting matches as she yelled, in part: “I don’t give a f**k about anybody else but me!”

One fan harshly commented on the teased scene: “She is gross and her 15 minutes are up!”

The new season also comes as the RHOBH star found herself in the midst of a $50M racketeering lawsuit.

In the court documents obtained by Radar, the law firm Edelson PC has sued the TV star, her company EJ Global LLC, the Girardi & Keese law firm, and its lenders.

Edelson PC accused Erika of acting as the “frontwoman of the operation, selling to the world [including unsuspecting clients] that Girardi Keese was successful.”

The TV personality is accused of being involved in her since-disbarred ex Tom Girardi’s alleged “racketeering scheme”.

The law firm also made claims that Erika “displayed a nationwide showroom of the money they stole on Real Housewives.”

The lawsuit will be using her past social media posts to back up its allegations.

This latest wave of legal trouble comes after the RHOBH star was accused of knowing her “lavish lifestyle” was funded by Tom’s schemes.

The 50-year-old star and her company EJ Global, LLC were named in a $2.1 million complaint, which was filed back in February 2021.

The lawsuit called out Erika and claimed she had “aided and abetted” her former partner in his law firm Girardi & Keese’s alleged financial wrongdoings.

The “Roller Coaster” songstress filed for divorce from Tom in November 2020.

Erika Jayne, who admitted to ‘mixing alcohol and antidepressants’ in an interview the day of RHOBH’s Season 12, looked unrecognizableGettyMiS3She wore no makeup and quite the ensemble in the stark front gate images[/caption]