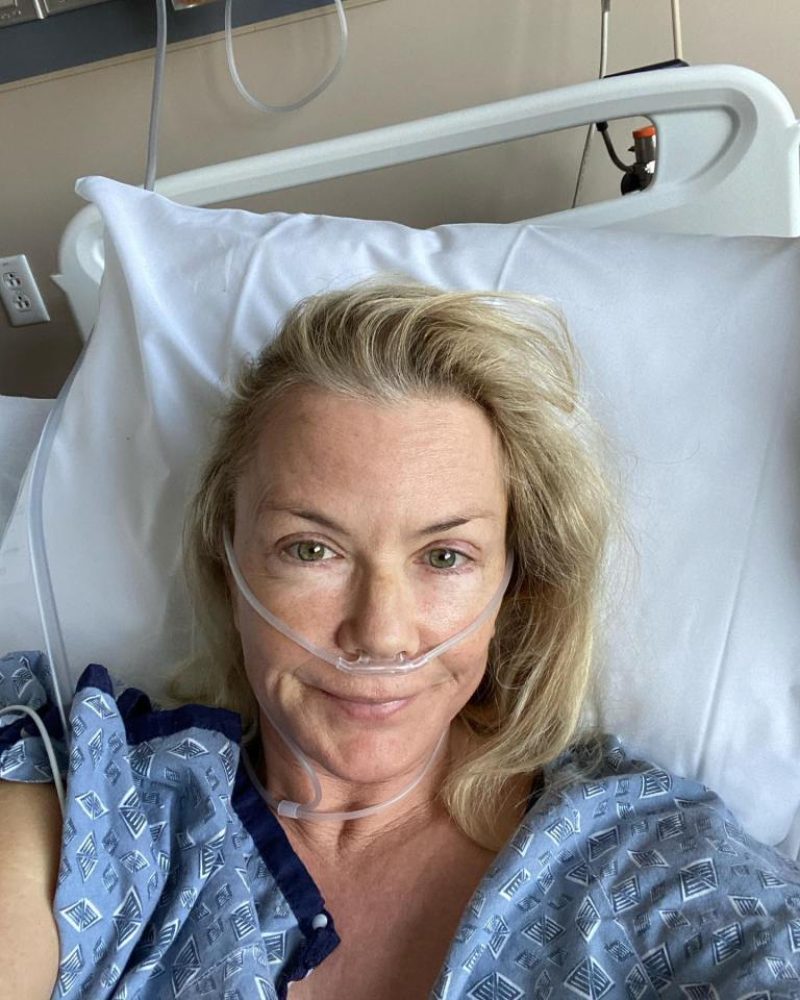 THE BOLD and the Beautiful star Katherine Kelly Lang has been rushed to the hosptial for emergency surgery.

The actress suffered a nasty fall while horseback riding.

Katherine, who plays Brooke Logan on The Bold and The Beautiful, shared a selfie from her hospital bed on Mother’s Day.

The actress revealed she was on a 40-mile horseback ride in Malibu this past weekend when she got off her horse and tripped on a rock, which cause her ankle to turn in a obscure angle.

“At around 16 miles I got off my horse to walk down a steep and very rocky trail to give her a break. At the bottom of the trail I tripped on a rock and my left foot took the pounding. My ankle and foot dislocated off to the left at a 90 degree angle to my leg. I pushed it back into place. It was so gross but I had to do it,” she shared via Instagram.

Katherine revealed that she had to get surgery on her ankle and cannot put any weight on it.

READ MORE ABOUT THE BOLD AND THE BEAUTIFUL

“Thankfully this happened by a road and a nice stranger called 911. And thankfully I was with my friends who helped with my horse and my spirits. The ambulance took me to the hospital and the xrays showed 3 broken bones in my ankle. Had surgery late that night and now have rods, pins, and screws in my ankle. No weight bearing on my foot for 6 weeks,” she wrote.

The 60-year-old said that she will still go to work this week and try to heal quickly.

“I am not a happy camper when things slow me down like this. And there is always a lesson to learn. Not sure what that lesson is yet but will have the time to contemplate. #staypositive,” Katherine ended the post.

She shared photos of herself in the hospital, along with her wrapped ankle, and videos of her and her friends riding horses.

Katherine revealed yesterday that she was still in the hospital.

As soon as she posted the update, fans, family, and friends were quick to send her well wishes.

Fellow Soap star, Krista Allen wrote, “Omg the pictures! Ouch!!!
I’m just a text away and close to the studio, if you need anything.
But might I say …Even with a broken ankle and swollen foot .. your pedicure looks fabulous dahhhling!”

“Love you. Lifting you up & praying for quick healing! You got this!,” said one fan.

Her TB&TB co-star, Lawrence Saint-Victor sent a bunch of heart emojis with a sweet message, “Oh my goodness!!!! Get well soon.”

One fan tried to lift her spirits by saying they have done it too. “It’s called an accident! I’ve had my share, lol.”

“So sorry for this. Happy healing! Maybe lesson is to just take things easy and not overdo things. And enjoy life, even when crappy things happen. You got this, Kelly!,” said another fan.

Another fan offered her advice as they have been in the same situation in the past.

“I broke my ankle almost exactly the same way! It takes a while, but my foot and ankle have been back to normal for several years now. It will all be good! Hang in there. :)”

Although Katherine may have had a setback because of her injury, she plans on returning to The Bold and The Beautiful.

During that time, many characters have come and gone, but the drama will always continue.

Katherine is one of the four central characters and has portrayed that character since the show debuted.

She will come back as Brooke Logan in the upcoming season.

Many other actors will be returning as well, but some are saying goodbye to the soap opera.

Tanner Novlan will be leaving the show, but Cassandra Creech plans to join the show.

The Bold and The Beautiful can be watched weekdays on CBS starting at 1:30pm EST.

The show can also be streamed through Paramount+ and watched online at CBS.com.