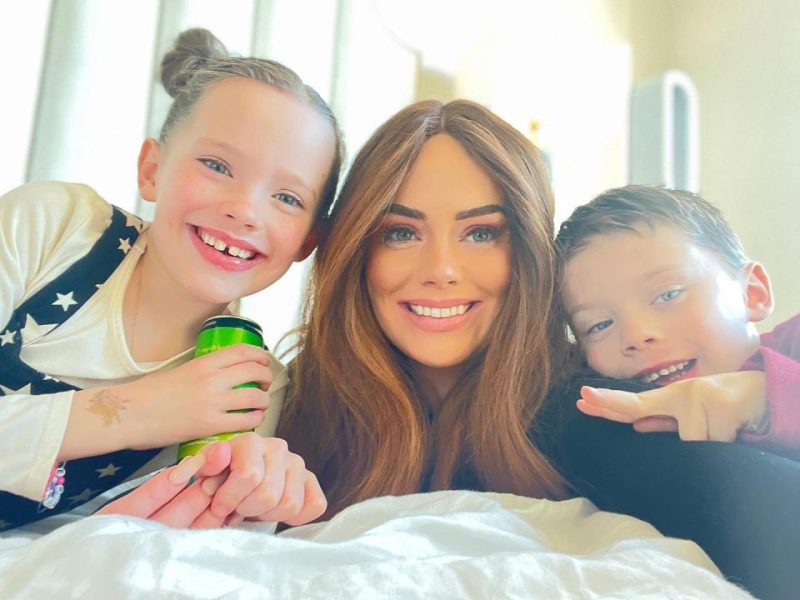 She was reunited with daughter Kensie, eight, and son Saint, six, after losing custody of them to her ex, Thomas Ravenel.

Taking to Instagram, she showed off her tan and auburn hair as she smiled between the two kids.

They both looked adorable, and her daughter held her mom’s hand.

In the caption, 30-year-old Kathryn gushed: “Yes, I gave you life, but really you gave me mine.”

She also paid tribute to her mom, Allison Dennis, who passed away in 2019.

“Happy Mother’s Day to us all, especially you in heaven, Mom.”

On her Instagram Stories, the Bravo star revealed that she and her little ones enjoyed sodas and cakes at a dessert shop in their home state of South Carolina.

Saint showed off a huge grin as they clinked their drinks and said: “Cheers to Mother’s Day.”

The occasion meant Kathryn was able to spend some quality time with the two, having lost custody to her ex Thomas, 59, in March 2021.

He accused his former partner of using drugs and neglecting the children.

Although she denied those allegations, the court ultimately sided with their father, who is the former Treasurer of South Carolina.

Kathryn has previously told her followers that she is “missing” her kids.

But when she does get to spend time with them, the Southern Charm star likes to keep her fans updated about their adventures.

In March the three reunited to celebrate Kensie’s birthday with a Limited Too inspired party.

And in late December, they enjoyed a belated Christmas get-together with their new puppy.

However, when she’s on her own, Kathryn is unafraid to flaunt her impressive figure by posting swimwear pictures on Instagram.

Recently, she showed off her cleavage in a tiny pink swimsuit.

Her posts have also won praise from other moms, who fell head-over-heels for the unedited bikini picture that she shared last month.

Fans cheered for Kathryn as she showed off her stretch marks in the untouched photo.

Another wrote: “Love seeing those sexy mama stripes! That’s a real body! Thanks for posting this bomb photo.”